Bryan Crabtree
|
Posted: Jun 05, 2017 12:01 AM
Share   Tweet
The opinions expressed by columnists are their own and do not necessarily represent the views of Townhall.com. 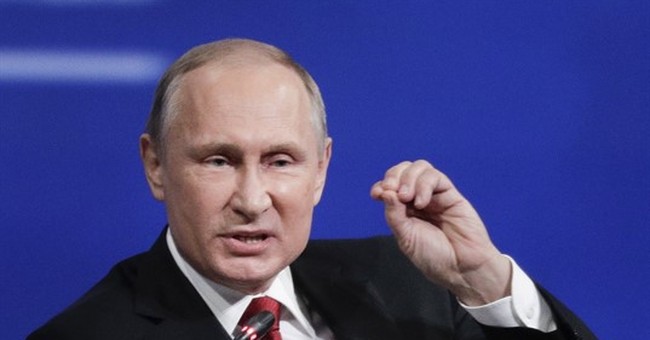 Every day there is a new leak about some absolutely normal government or political-leader’s thoughts, communication or connections. For the first time, we are being rapidly exposed to sensitive or classified details of our governmental functions. It is scaring us.

If Russia had planned to divide Americans by hacking our election, they couldn’t have imagined it would be this successful.

Trump-haters are unwittingly assisting Russia in efforts to divide, disrupt and degrade our nation.

Let's face it. If Russian did hack our election, their goal was to divide our country and cause the American people to lose faith in our system. Initially, they were unsuccessful. But, because of the hatred for President Trump, they are delivering success to Russia.

Meanwhile, Americans are losing healthcare, incomes are lagging inflation and we have millions of impoverished (even hungry) citizens. Our country’s debt is still growing and congress is paralyzed to address any of it.

No worries! They are focused on much more important issues like the hacking of the Democrat National Committee and the Hillary Clinton campaign “caused by President Trump.”

Last week, Clinton floated a laughable conspiracy-theory suggesting that the Trump campaign had inside and outside operatives colluding directly with Russia to defeat her. California congresswoman Maxine Waters suggested two weeks ago that phrases such as “Crooked Hillary” were created by Russian president Vladimir Putin and transmitted to candidate Donald Trump. She said, “It’s straight out of the Putin playbook” on an MSNBC interview.

These delusions, further indulged by a complicit media is causing a distraction from the economic progress many Americans are desperate to create.

This is the most damaging scandal in our history. The hatred for President Trump is beyond political opposition. It is a toxic blend of hatred combined with mental instability.

We have spent the past eight years with a feckless leader who was afforded unfettered platform to distort America’s values and thrust unworthy and despicable people into the mainstream. President Obama’s tenure brought Washington robotic, even deviant bureaucrats who use the rules of the system to cheat Americans.

Comedian Kathy Griffin’s stunt-photo of a severed and bloodied Trump-head (ISIS-style) showed us the cultural damage we’ve experienced in the past eight years. This acceleration of hatred and immorality is profound because trickery has become popular. Griffin’s entire stunt was a trick.

Griffin likely planned this photo-release, apology and “Trump is destroying me” script well in advance of creating the photo. Griffin probably needed to boost ticket sales and knew that this stunt would be a guaranteed winner, serving as a ‘dog-whistle’ to the millions of confused, delusional Trump-haters in her fan base.

Whether politicians or citizens, these Trump-haters actually believe most of their own rhetoric and the resulting hatred is only going to get worse.

I’ve heard many people say that by denouncing Griffin’s photo, even liberals showed us that even they have limits to this hatred aimed at Trump. I disagree. They showed us where ‘the line’ is today. You should expect that line to continue to move into even more shocking territory unless and until they get their way.

While politicians continue to invent scandals to stop this president, there are Americans who are struggling with upward mobility, healthcare and the increasing burdens of our technological age.

The increasing dependence on technology and the culture-shifting phenomenon of social media is rapidly rendering American lives nearly dysfunctional. We are not designed to consume this information.

Moreover, with some politicians outright promoting disruption, they are causing more harm to the American psyche than any amount of Russian influence into our elections could ever cause.

The average American is overworked and underpaid while struggling to maintain a healthy balance between life's necessities and future family prosperity. Our government continues to limit our potential through dysfunction, regulatory-burdens and controversy. This is degrading our faith. While we seek prosperity they seek vanity and power.

We simply don’t know enough to understand what we are seeing and whether much of it is legal, right or wrong. Politicians prey on our useful ignorance.

Many people are falling victim to their own ignorance. Democrats are successfully projecting normal actions of government onto President Trump (or associates) as if though it is criminal activity. They use words like “backchannel, undisclosed contact” or “paid speeches to a foreign government” to make it appear these actions are illegal. They are not.

Our lack of context and understanding is dangerous because we are consuming news and information we do not want to see.

Even if the Trump campaign had inappropriate connections with Russia, publicly litigating that hypothesis isn't worth the division it is creating amongst our leaders and citizens.

Can you imagine the chaos if the American people were aware of the Cuban missile crisis while it was happening? What would have happened if that threat would have been leaked to the public amid the crisis? I submit it could have shifted it from crisis-averted to World War III because President Kennedy would have been distracted by an emotional public.

Americans want someone to keep them from knowing what they don’t want to know, because we make our problems far worse with our out-of-control and uninformed emotional reactions.

I want to know if special counsel Robert Mueller (investigating the Russian-election controversy) finds any Americans committing illegal acts. Until and unless he does, we should all focus on something important like our families, businesses and futures.