Bryan Crabtree
|
Posted: Jan 20, 2017 12:01 AM
Share   Tweet
The opinions expressed by columnists are their own and do not necessarily represent the views of Townhall.com. 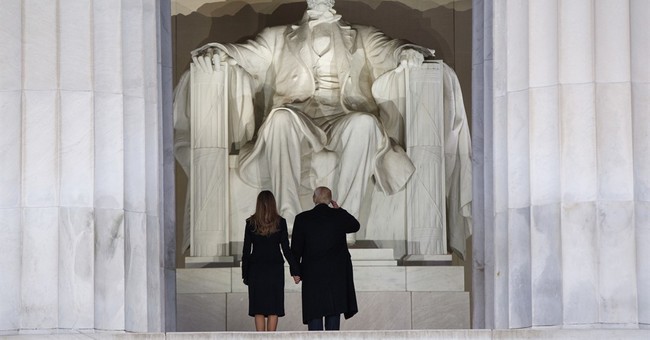 WASHINGTON D.C. — If you thought the election of 2016 was volatile and embarrassing, you haven’t seen anything yet. The first one-hundred days of Donald J. Trump’s presidency will bring continued political polarization, fear-mongering and controversy.

Most of the embarrassing moments won’t be Trump’s counterpunches. It will be the stirred-emotions resulting from the collusion and information-fraud of liberals and the media.  This will serve as a worthless distraction from the business at hand but will likely prove ineffective at stopping Trump’s key objectives.

The media will fixate on the ‘crazies’ (re: protestors) already in the streets throughout Washington D.C. today. Popular Democrat politicians and activists will be given an unfettered platform on the major networks to spew their bigotry, hate and dismissiveness to real issues and solutions.

What do these protestors hope to accomplish? They want revenge. They want innocent Americans to suffer for electing Donald J. Trump the 45th president of the United States.

While the snowflakes throw a fit, a lot will be accomplished:

In the first one-hundred days, ‘Trump and company’ will successfully repeal ‘Obamacare’ by striking deals with a finite number of Democrats who are in moderate districts.

It seems shockingly obvious that Republicans have failed to spend the needed efforts to manufacture a replacement to ‘Obamacare.’ The majority of Americans believe it should be repealed and replaced. Moreover, they believe that exclusions for pre-existing condition should not return.

Repealing without replacing ‘Obamacare’ will help our economy, but that’s not the story that will be told by the media. The parade of stories that will follow a viable replacement will diminish Trump and Republicans’ political capital.

Trump must present a plan to cover pre-existing conditions and deal with the 20-million families now on Obamacare.

Moving the insured who are receiving subsidies to Medicaid is the best solution. For the rest of us (people like me), paying our own insurance bill, I’m sure we’ll find our own solution so long as there are no pre-existing conditions excluded and more competition is incentivized through the legislation.

…and, Mexico is going to pay for it!

Not exactly! Trump will face significant budget resistance by Republicans on this issue. They will lose (just like sixteen of them in the Republican primary) as ‘Trumpzilla’ stomps through Washington with his powerful mandate and political capital.

It will cost $20 billion (or more) and American taxpayers will have to ‘cut the check’ for it. So be it. We must have increased border security. Worried they’ll climb over or dig under? They won’t if there is a proper wall.

Mexico will never write us that check. What they will do is negotiate a trade and/or security concession over a ten to twenty year period that will magically match the cost of the wall. In Trump, ‘Art of the Deal’ style, Mexican politicians will be able to say they did not “pay for the wall” and Trump will be able to claim they did - by default.

This will be a major campaign issue in the 2020 elections (re: debating each side of that point).

First, not everyone is being harmed by Dodd-Frank. Big banks and Wall Street find Dodd-Frank to be so complex and voluminous that it gives them a competitive advantage. Big businesses can afford to fight bureaucracy because of their vast resources. Part of the fight involves buying their competitors (or eliminating them) at discount prices (who have been crushed by such laws).

Dodd-Frank is harming small and medium community banks and thus choking job creation (because of the resulting and restricted lending). When small businesses can’t get loans, they can’t expand and hire more workers. This disastrous law has a much more negative impact on jobs and our economy than ‘Obamacare.’

Second, in tandem with Dodd-Frank, we created an entire new regulatory system for banking: Federal Housing Finance Administration (FHFA), TRID, QRM (mortgage guidelines) and many more. Forget what these agencies and laws do. They create institutional-fear, which limits reasonable access to capital for most businesses and individuals in our economy.

It’s hard to remove the tentacles of programs and especially agencies created by congress.

Dodd-Frank will be handicapped by Trump in his first 100 days, but not repealed. It will loosen capital in the financial markets, but not enough.

I would keep Dodd-Frank, in its entirety, for any bank holding assets of more than $500 billion. In other words, let the big banks like Wells Fargo, Chase, Citibank, Bank of America and others deal with the law. Set the smaller banks free.

Small and medium banks didn’t create the financial crash; the big ones did. Dodd-Frank is a great law in order to stop institutions who are ‘too big to fail’ from running amuck. The small banks don’t pose any risk to our financial system and thus should be allow to conduct their business and lending using their best judgment - not that of the federal government.

Trump is about to drive a ‘Mack truck’ through Washington D.C. and there will be a political storm in its wake likely greater than the 2016 election.

Be prepared. It will be ugly and you will be tempted to lose faith in his ability because the ‘fallout’ will be messy.

Just remember than in order to rebuild a broken home, sometimes you have to tear down some walls. Maybe I should say, “the bull in the china cabinet (Trump) make break some dishes.”

They are ugly dishes anyway.