Bryan Crabtree
|
Posted: Nov 12, 2016 12:01 AM
Share   Tweet
The opinions expressed by columnists are their own and do not necessarily represent the views of Townhall.com. 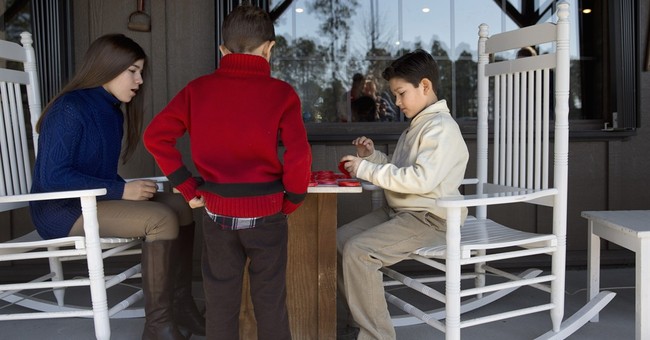 Have you heard it? The left-wing media has been quick to rush to the statistics to show how Donald Trump shocked the nation in winning this election, and it’s been an extremely bigoted analysis.

Many of the experts who got it wrong for the last eighteen months have explained it by saying the ‘Cracker Barrel crowd’ elected Trump.

They report that Trump won the election astoundingly amongst non-college educated voters in some states. For instance, he won by thirty points in Michigan verses Mitt Romney only winning that ‘uneducated’ group by eleven points in 2012.

To infer that the ‘Cracker Barrel crowd’ is any less relevant to our country is no different than asserting someone has less relevance because of their race, religion or national origin. It's bigoted and it should not be indulged. I’m not offended by it and I’m certainly not angry like many of the petulant children who we've seen rioting and protesting in the streets because they don't like the outcome of our democratic process.

I know the ‘Cracker Barrel crowd.’ It’s called “my family.” I grew up in middle Tennessee working for the company that manufactures all the rocking chairs at the Cracker Barrel's across America. In fact, it was my first job and it was the hardest work I've ever done.

On any given day, many of my close and extended family may eat at Cracker Barrel. They are what we call ‘the silent majority.’ They go to church on Sunday, they save for retirement, they teach their kids morals/values and they give to charity. They don't like confrontation or conflict and they rarely like discussing politics (with outsiders) because they don't want extra strife in their life. They want to live humbly and peacefully in a free nation and enjoy their life without extensive government or outside interference.

They are disgusted by the direction of this nation. They don't hate anyone and they certainly don't feel that they are ‘better’ than anyone else.

I'm part of the ‘Whole Foods crowd’ now. I've been blessed in success and I love to eat healthy. But, my roots are still in the country on a farm at the ‘Cracker Barrel.’ And, I’m not ashamed of it.

It’s in that environment where I find the most peace.

In this fast-paced, overwhelming, digitized and complicated society, there are days where I envy the simplicity that many of my hometown friends and family still enjoy.

How dare these leftist elites with their self-aggrandizement, smug-superiority and bigoted ‘better than thou’ attitude try to cast aside millions of goodhearted, Christian and hard-working Americans simply because they are less sophisticated and engaged in this overwhelming society!

While I may not be living the ‘Cracker Barrel lifestyle,’ I appreciate it because it's rooted in family, values and goodwill.

When the “Cracker Barrel crowd’ is defeated they are humble. When they suffer strife, they pray. They attempt to love their enemies and they mostly forgive the transgressions by others against them. They wait for a divine moment, patiently, and then they act.

I have heard it said that God gives us billboards - signs (in life) that are clear warnings or clear indications of what we must do to live out our purpose.

The infinite wisdom and patience of the ‘Cracker Barrel crowd’ to endure the Obama presidency, the developing civil unrest in our nation and the degradation of our leadership and economic authority in the world - is staggering.

They are not simple in purpose even if they may appear simple (to some) as people.

They read ‘God's billboard!’ For every attack against Trump, they read even more, they watched the entire video (in context) and they were awakened to both the crookedness of the Left and the incredible distortions of the media.

Every time the media played the Access Hollywood video, bashed Trump about his taxes, attacked his wife (immigrant Melania Trump) or called him a name (‘racist’ or ‘bigoted’) the ‘Cracker Barrel crowd’ was reminded of how they had been treated for simply trying to follow their moral compass in life: judged by others and cast aside as ‘simpletons.’

The unending, visceral and volatile nature of this election and the one-sided assaults on Trump served as a clear ‘billboard’ that this election was a divine calling to take this country away from the people who were destroying and distorting it.

In defeat, many leaders, leftist-activists and truly angry citizens have made themselves known as they have criticized the democratic process, rioted in the streets or called for violence in the wake of a Trump victory.

From this horrific display, we now know that the ‘Cracker Barrel crowd’ is not the problem in this nation even if they are simple. They are the heart of this nation. I will not stand for attacks on this group as we watch these ‘out of control’ adults, acting as toddlers - having temper tantrums in the streets of America.

These ‘toddlers’ are emotionally immature, cognitively disconnected and unable to express an intelligent or cogent thought (just as a 2 year-old throws a tantrum in the middle of a ‘Cracker Barrel’ store’s floor). They should be ignored.

In the words of President Obama, “Don't boo, vote!” Thankfully, the ‘Cracker Barrel crowd’ voted en masse, and now we have a chance to rehabilitate this great nation.

From May 5 until now, I predicted this enormous victory because I knew the ‘Cracker Barrel crowd’ had awoken and no poll could detect it.