Bryan Crabtree
|
Posted: Oct 09, 2016 12:01 AM
Share   Tweet
The opinions expressed by columnists are their own and do not necessarily represent the views of Townhall.com. 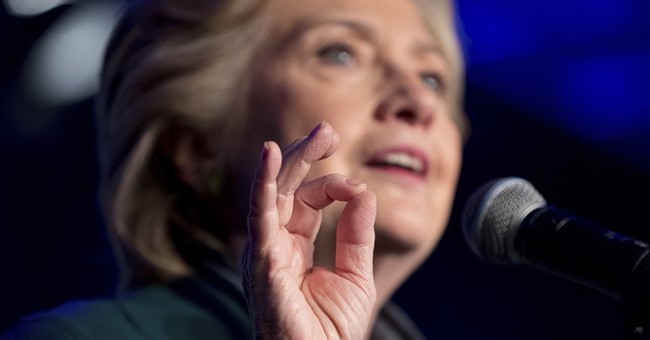 I”m very conflicted as are many conservatives on the day of the second presidential debate. Without a solid performance tonight, Donald Trump likely loses.

He needs wikileaks to save him by exposing the unproven truths about Hillary Clinton.

On Friday, Trump’s campaign was put on the defensive because of the release of a 2005 recording where he made incredibly lewd comments about women and how easy it was to make sexual advances because of his celebrity status. In context, these comments were in private but as a result of a lingering hot-mic from a television report.

While Trump did apologize and promise to never make such comments again, I have a simple question: Why would a businessman of his prominence and success ever say such things to anyone?  Such comments should be well above his stature. He should know they would eventually be public. This brings into question what I have touted as his biggest strength: judgment.

However, Hillary Clinton is a terrible choice for president. Her attacks against Bill Clinton’s affairs and rape-accusers combined with her voluntary defense of an accused rapist are even more disturbing. In fairness to Trump, there is no evidence that he took such actions as he touted ‘amongst the guys.’

Thus far, a host of critical Trump-Republicans have condemned the statements including, Florida Governor Rick Scott, Texas Sen Ted Cruz and Florida Sen. Marco Rubio (who, as of late, have been supporters).  New Hampshire Sen Kelly Ayotte has said she will write in Mike Pence for president.  Utah congressman Jason Chaffetz has withdrawn his endorsement completely.

Trump did not attend Speaker Paul Ryan’s political forum in Wisconsin this weekend. Gov. Mike Pence, Trump’s running-mate, elected to cancel his appearance. Sources are indicating that Pence is “beside himself.”

I conducted a twitter poll where nearly 75% believed this would blow over by the time of the election. Ten percent thought he should drop out and twelve percent thought Pence should be at the top of the ticket. Clearly this is not scientific but shows very little drop amongst his supporters.

On Friday, WikiLeaks released more emails which included transcripts of speeches given by Hillary Clinton to Wall Street companies and donors. They included the admission by Clinton that ‘politics is a dirty game’ and sometimes she has to ‘have a private position on issues and a different public position’ in order to get elected. There was further admissions (in the scripts) that she is a big believer in completely ‘open trade and open borders.’

Both Trump’s tape and Clinton's continued revelations are disgusting.

I asked my wife for her perspective (as a woman) and she told me this:  “The only person that's never said bad things about women is Kim Kardashian. I don't want a perfect person. I care about what he does; not what he says. I want to see action. I want a bulldog.”

My biggest two observations which favor Donald Trump are ‘leadership’ and ‘judgment.’ I asked my wife “Can an exceptional leader be someone who talks this way?”  Her answer was, “These comments may represent one percent of who he is but not the whole of the man….I want his policies.”

My wife and I did agree that this is part of the leftist media's assault on ‘any Republican that ever dares to run for president who's had a successful business career.’ They are separate to destroy him (just like Mitt Romney) for what he did and said in 1975 to 2005. Further, they are distracting Americans from the important issues of poverty, security, jobs, the economy and ISIS which are more likely to destroy us.

But, how does someone support an individual who, eight months into his current marriage with Melania Trump, who is speaking about women as objects and about how he can ‘take advantage’ of his celebrity status (with them)?

What’s my alternative? Clinton, in my view is far worse.

Would I support Pence taking over the ticket? Absolutely, but that is unrealistic and not even moderately possible. Voting for a third party candidate is a de-facto vote for Clinton (by someone like me).

Trump stated, “Go behind the closed doors of career politicians and see what they are saying…They make me look like a baby” in terms of their comments compared to his. This may be true, Mr. Trump but ‘two wrongs don’t make a right.’

I have never been a fan of my friends or colleagues that speak equally as harsh about women. I believe a majority of men say these sorts of things at times during their adult lives. A large plurality of men do not.

His 2005 comments are what I would describe as typical ‘macho-man locker room’ talk. I've heard it dozens if not hundreds of times. In most cases, I have considered the comments to be stupid, lewd but innocent. In other words, that’s how many men ‘show off’ with their friends to exude confidence, self-esteem and to cover their insecurities.

Many of the men I've observed making these comments over the years are (to quote Trump) “all talk and no action.”  My conflict arises because of this. Clearly, Trump can make incredible decisions, using solid judgment to create overwhelmingly successful outcomes in business.

Is this representative of his greater character or an example of what all of us experience: moments of ignorance, stupidity and weakness?

This article means nothing. It's simply me thinking out loud in a moment of devastation that could pave the way for Clinton presidency. Conservatives and undecided-voters should step back and think of the consequences of judging someone on 11-year-old comments, 30-year-old actions or 25-year-old business failures. Is this the man he was or the mistakes of a man which have shaped him to save America from its decline?

His performance in the second and third debates will be my only deciding factors.

A Gaza Building Housing Media Outlets Was Destroyed by IDF. This is Why.
Townhall
AP's CEO 'shocked and horrified,' says they had no indication their building contained Hamas military intelligence assets
Twitchy
Not Looking Good for Dems: Americans Deliver Brutally Honest Rejection of Kamala Harris
Redstate
The Hamas Rocket Attacks Are Based on a Lie
PJ Media