Bryan Crabtree
|
Posted: Sep 01, 2016 12:01 AM
Share   Tweet
The opinions expressed by columnists are their own and do not necessarily represent the views of Townhall.com. 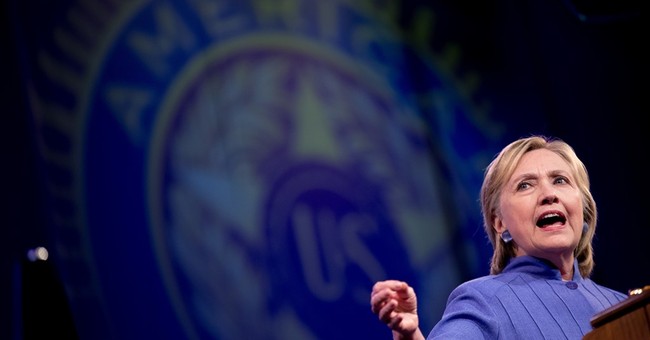 The reason many Democrats and Hillary Clinton supporters can tolerate her lies, cheating and illicit behavior (private email servers) is because of their affinity for moral math.

I believe that Democrats like Clinton believe (in their own mind of course) that many of the things they are doing for other people is morally superior such that it overpowers all their wrongdoing. As a result of their self aggrandizement, they believe they have a positive moral bank account.

For instance, in the case of the Clinton Foundation, we are frequently reminded of all the drugs they provide to cure disease around the world. They suggest that without their work people will die. In most cases, these statements are made in response to questions regarding what Clinton will do with her involvement in the Clinton Foundation should she become president.

In response to concerns about her family’s involvement (should she be elected) with the Foundation, campaign staffer Kristina Schake reminded CNN’s John Berman about “the life saving work that the foundation has done all over the world…And, Hillary is so incredibly proud of that….It’s really important the foundation’s work continues…It’s going to take a little time to do that.”

The foregoing is short for, “were going to wait until you forget about it and do nothing.”

Half-truths are one of the most dangerous verbal weapons in our society. They are used deliberately in order to deceive you. Thirty-two percent of the Clinton foundation's expenses was used on travel, salaries and conferences. Let's assume the rest went to these magnificent causes. Who could have a greater influence over poverty, business and disease in the world?  Would it be a single charitable organization or the president of the United States?

The Clintons should choose one. Clearly, based upon her record, Hillary can't handle both without cheating.

Shacke clearly deflected from Berman’s question. The intent of the question was to give the American people assurances that Hillary would be honorable and not use the Clinton foundation as a ‘pay-for-play’ access to the White House if she is elected president. These answers reveal leftist moral math. They infer that the ‘great work’ of the Clinton Foundation supersedes and overcomes the deviant behavior of its founders.

Many people charge that Republicans are equally as guilty for illicit behavior, sex scandals and lies. I suppose that is true. However, Republicans are never allowed the advantage to deflect from the offense and point to their accomplishments using ‘moral math.’

So, why do Clinton and many Democrats get to use moral math and get away with it? It's simple. All people are flawed and make incredible mistakes. Very few people believe that it's okay to calculate how many good works you must commit in order to escape consequences for your destructive and illicit behavior.

This is why Democrats support so many entitlement programs, handouts, free college, subsidized healthcare and so-called ‘planet-saving’ green energy initiatives. The Left believes these causes far outweigh the damage their pursuit of power and profit causes — especially Hillary Clinton.  In other words, the end justifies the means.

When Donald Trump called Clinton a bigot and racist, this is exactly what he meant: She may not articulate that she feels superior to minorities, but she certainly acts and believes she is their savior. Her air of smug superiority exposes an individual who believes other races/people will be incapable of caring for themselves without people like her.

My faith teaches me that all of us have a negative moral-math bank-account.  We’re all sinners and are inclined to make honest mistakes. However, most of us are not arrogant (or deviant) enough to believe that we can knowingly deceive others, cheat and break the law and have enough compensating moral goodwill to render our negatives into a net-positive.

It is evident that Clinton (and others like her) believe they get to choose right and wrong because they believe they are better, smarter and more enlightened than the rest of the American population.

Moral math is the only explanation as to how Hillary Clinton can sleep at night.