The One Click By Trump That Can Send Our Nation Into Hysteria.

Bryan Crabtree
|
Posted: Apr 02, 2016 12:01 AM
Share   Tweet
The opinions expressed by columnists are their own and do not necessarily represent the views of Townhall.com. 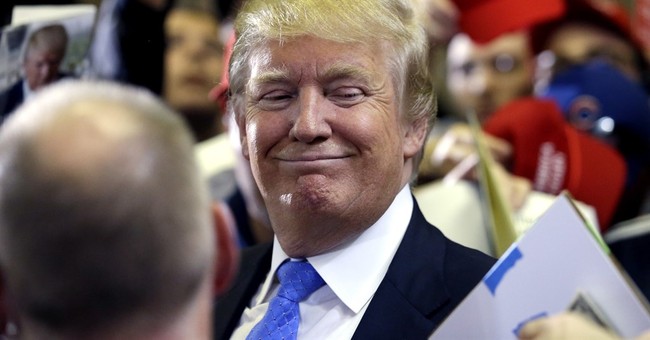 In a recent interview, Donald Trump was asked about his polarizing tweets and retweets.  He was also asked if he would be a reckless president sending such tweets as a reaction to disagreements with World leaders.  In his response he asserted that many people get outraged and question his tweets as a result of jealousy.

Admittedly, Trump’s answer was underwhelming. He ventured into the number of followers he has on Twitter and suggested that many of his critics only have 50 followers.

But the bigger question here is what role will Twitter (and other social sites) play in culture, foreign relations and political races?  Do we believe it's a bad idea to react to foreign affairs or political debate through tweets, retweets and posts?

My view is that Twitter and Facebook are the new ‘Fireside Chats.’  Radio was the original social media, so when Franklin D. Roosevelt started his radio fireside chats, it likely seemed just as bizarre as Trump’s Twitter fetish.

Arguably, each one of Donald Trump's tweets is read by tens of millions of people. It's not just the six million people who follow him, it's the millions, collectively, that follow his followers.  Twitter brings new meaning to six-degrees of separation.

In a Trump White House, it’s imaginable that a lot of events would play out in real time on Twitter.  The upside to this, is that it allows Twitter (and other social sites) to be a huge extension of the President’s bully pulpit.  This may be very positive, in that, it allows someone like Trump to control the narrative/context and diminish the power of the traditional media.

If there's a dispute with a foreign-leader or a negotiation with evil countries like Iran or North Korea, social media could certainly be powerful.  Social media reach creates leverage over enemies and competition.  The more clever it is used the more support/followers you can garner.

Businesses across America have already deployed these tactics to sell their products and thwart customer service nightmares.

Many traditional political advisors, feel that it's not presidential to air your dirty laundry on Twitter.  This may be true with a traditional thought process, but we must accept that we are in an age where Twitter, Facebook and other social media forces are not only relevant, they are very effective.  Donald Trump’s success, thus far, proves this point.

What is acting ‘presidential’ anyway?  Is that the part where you listen to 25 year-old political science majors rattle off the research on what you are supposed to believe today to attract the most votes?  How has that been working for us?  Wait!  Don’t answer.  The answer is obvious:  Not well.  The best liar should not win if we want to have the brightest future.

The complication is that many people have a different perception of what a tweet, retweet, or like means on twitter.  Last week, political enthusiasts spent the entire week debating Donald Trump’s unflattering retweet of Heidi Cruz next to Melania Trump.  If it weren’t so sad, our resulting hysteria would be funny.

The amount of coverage dedicated to Trump-retweets in the past nine months is astonishing; I believe this happens for two reasons. First, many people don't understand the meaning of a retweet. Second, most people see Twitter and Facebook as an extension of their communications instead of being a completely different form/style of communication.

I’ve written extensively on the topic of retweets.  A retweet is best translated as “look at this” or “tell me what you think.”  I frequently retweet things for which I vehemently disagree, in order to see what reaction or comments they generate.  It helps me gain a perspective for my writing or my shows.  It’s enlightening to me and a form of entertainment.  I submit Donald Trump retweets for the same purpose.

Regardless of what Someone retweets, it should never be construed as an endorsement or rebuke, of their actual feelings, unless they specifically add a quote to the tweet saying as much.

Social media sites are an extension of artistic or personal expression. Posts are not meant to be taken literally - they are more of a extension of people’s thoughts and current state of mind (which changes throughout each day).  What I find amazing, is that we judge people for their social media comments without considering their perspective.  In other words, in to take someone’s tweets and retweets literally, you would have to review days worth of material, cumulatively, to develop a fair perspective (and would heavily weight their original comments, not their likes or retweets).

The next time someone retweet’s a post, don’t assume that’s their official position.  And, don’t be so offended by what’s said in 140 characters or less.  Instead, listen to them on the radio, watch them at length on television or, if you are so privileged, talk to them in person.  Otherwise, you may be mislead into believing something that’s simply not true.  Or worse, you may develop raging hate for a candidate, who said nothing, but simply clicked on the retweet button.