The Cost In Standing Up For Your Pastor? $2 Billion

Bryan Crabtree
|
Posted: Mar 23, 2016 12:01 AM
Share   Tweet
The opinions expressed by columnists are their own and do not necessarily represent the views of Townhall.com. 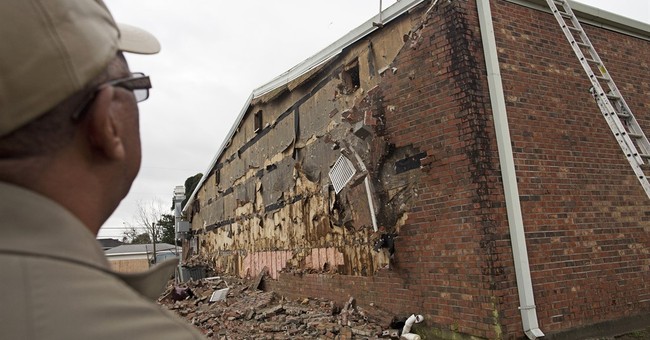 Georgia is the latest to enter the national mayhem surrounding a state-sponsored religious freedom bill.  Its also the latest group to be the target of media obfuscation.

Several versions of #HB757, The Religious Freedom Act have been debated by the legislature of Georgia.  The most memorable was the February version that allowed businesses to cite their faith as a reason not to conduct business with lifestyles that conflict with their values..  The was a far-right version that conflated our for-profit roles in commerce with projecting our religious beliefs on our customers and clients.  If sinners are banned from commerce, then we would suddenly find our for-profit business non-profit and bankrupt.  Quickly, such a bill lost support.

Last week, the state Senate passed a version that is better dubbed, “The Pastor Protection Act.”  This version of #HB757, awaiting Govenor Nathan Deal’s signature or veto, focuses on faith-based organizations and not businesses.

In essence the final version exempts preachers and faith-based organizations from being forced to conduct a wedding, rent their facilities or employee individuals that do not align with their values.  To qualify for this exemption, the organization must be legally registered as a 501(c)3 with the Internal Revenue Service.  The exemption is not just for Christian organizations.  For example, this would also reciprocate to atheists.  An atheist would receive the same protections under the bill should they wish to reject Christians from employment or participation in any of their ‘non-profit’sponsored activity or event.  This could include faith-based, non-profit schools, charitable organizations or community outreach programs.

The media has resorted to obfuscating the facts leading many businesses and leaders to believe that this bill endorses blanket discrimination against same-sex couples.  In fact, the words gay, same-sex, Christian or atheist do not appear in the bill.

Comparing #HB757 to the First Amendment of our Constitution, one can become quite confused.  Doesn’t it already protect Pastors and Churches from being forced to perform same-sex weddings?  The short answer is ‘almost absolutely, yes.”  But, only for now.

The Supreme Court’s decision in Obergefell v. Hodges only ruled that states must issue marriage licenses to same-sex couples.  It made no ruling on the role of pastors or churches in those marriages.  The Supreme Court has already ruled on the ‘ministerial exception’of the First Amendment which prohibits the governmental or judicial interference in the hiring/firing decisions of a church or its directly affiliated organizations.

Georgia’s bill is redundant, but certainly not discriminatory.

Freedom of Association clauses of the First Amendment are also a very strong defense for pastors and churches allowing them to choose its leaders and members according to their internal set of beliefs.

Georgia #HB757 is not just to protect pastors or churches from being forced to conduct same-sex weddings or admit members who don’t align with their values.  It appears to be a bill that deters frivolous lawsuits by putting the burden of such legal costs on the activist filing the cases, if they lose.

Remember, I said the First Amendment ‘for now’protects pastors and churches from being forced to conduct a gay-wedding.  It doesn’t protect them from facing multi-million dollar legal bills in their defense.

There hasn’t been such a case in Georgia, but is it coming?

A gay couple, in Winston-Salem, North Carolina, filed a lawsuit against their pastor, the Rev. Kelly P. Carpenter from Green Street Church.  Kenneth Barner and Scott Chappell, claimed Carpenter violated the Book of Discipline in his“failure to perform the work of ministry.”  The assertion is that the rules of the church are contradictory.

Human Rights Campaign president Chad Griffin threatened Governor Deal that if he did not veto GA #HB757, there would be a boycott of Georgia.  He urged Hollywood to abandon the burgeoning Atlanta film-market stating, “If this bill is signed into law, your employees, your contractors, all those working on your production are at risk of state-sponsored discrimination. That is wrong, it’s un-American. It’s an affront on all the values Hollywood prides itself on.”  Wouldn’t such a boycott hurt many of the very people they’re trying to protect as well?

The NFL, NBA, Microsoft, Apple, Coca-Cola, Salesforce.com and many others have all pled with Georgia not to enact this legislation.  The NFL has gone so far as to threaten Atlanta from being removed from Superbowl consideration if it does.  I find it rich that the ethics-lacking NFL is preaching to Georgia about a ‘Pastor Protection Act.’  The NFL states they have no interest in holding a future Superbowl at the most advanced new stadium in the world, because Georgians want to outline protections for their pastor and church.  Perhaps they should be concerned with abuse, drugs, assaults and murders overtaking the NFL and leave us to our concerns.

If we pass this bill, what do we gain?  I submit that nothing is gained.  However, now we have outside corporations, sports leagues and activist groups threatening our citizens and state-government.  If we cave to that pressure, we send them a message that it’s okay to bully us on any issue of freedom, faith or purpose.  Has anyone actually read the final version or just emotional erupted from the headlines?

The Atlanta-Metro Chamber estimates these threatened boycotts could cost up to $2 billion.

We now realize that those opposed to #HB757 oppose the very covenants outlined in the First Amendment - they find it discriminatory and offensive.

The real question for faith-based Georgians is simple.  Do we have faith that our lost jobs and revenue will be replaced by groups proud to call Georgia home because it stands up against bullies is firm on its values?