Bruce Bialosky
|
Posted: Jan 20, 2019 12:01 AM
Share   Tweet
The opinions expressed by columnists are their own and do not necessarily represent the views of Townhall.com. 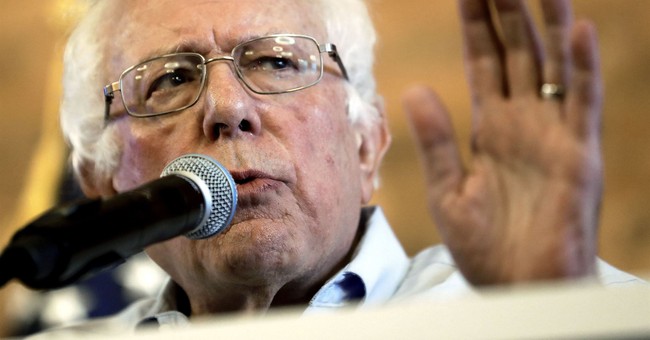 Often these days people tell me how they don’t trust what they are told by the press.  I tell them they don’t know half the story.  I read many news stories that I find interesting and then I decide I should dig deeper.  It is very often surprising how the story turns out quite a bit different than what the MSM has led us peasants to believe.

When the story broke that there was mistreatment of women during the 2016 Bernie Sanders campaign, I initially had a moment of schadenfreude and then moved on to other matters.   Then the complexion of the story changed for me and should for you.

Virginia Jeffries wrote her compelling story entitled I Was Sexually Harassed on Bernie Sanders’ Campaign. And No One Cared in the Forward, a Jewish national publication. Her story brought up many questions that led to finding out how the press seems to be using this story for their own interests.

On April 19, 2016, the day of the New York Democrat primary, Ms. Jeffries was volunteering for the Sanders campaign at the South Bronx office.  A voter came into the office and after requesting some t-shirts “he stepped toward me, grabbed me by the back of the neck and began stroking me up then down from the back of my head to just under my shirt collar.”   Jeffries decided this was a clear case of sexual harassment and decided to report it to the staff who she thought would want to prevent anyone else from experiencing the same thing.

Jeffries goes on to describe how she first reported it to a young staffer and identified the person who accosted her by name.  The staffer replied “If it was a voter who harassed you, then there’s really nothing we can do.”

Jeffries tells the tale of how she worked her way up the campaign chain, with equal disregard.  Level after level of personnel ignored her as she rightfully persisted in a quest to get someone to focus on the fact that the man had sexually attacked her. She finally approached the campaign manager, Jeff Weaver.  He had John Robinson, the campaign chief operating officer, contact her.

When asked how often he deals with sexual harassment cases with the campaign, Mr. Robinson responded with a brief answer – “All the time.”   Robinson assured Jeffries that proper protocols were in place though Jeffries disputed that.  Robinson assured her he would take up the matter with Weaver and Sanders himself.  When Jeffries tried to contact Robinson to follow up on whether he had done anything or informed his superiors, she hit a brick wall with stone silence.

I wrote the opinion editor of The Forward, who I have previously dealt with, and asked some basic questions that were left open by the story.  Receiving no response, I tracked down Ms. Jeffries who has been a journalism student.

Ms. Jeffries was very open and cooperative.  I started by telling her that what the voter did was absolutely unacceptable and constituted assault and battery (actually sexual battery).   I asked why she had not gone to the police.  She told me “I didn’t know it was a crime. Didn’t know I could go to the police.”

Not one person told her she should file a police report.   It was quite obvious that it was not an internal campaign matter as was originally asserted, but they knew the name of the person who attacked her.  Was the campaign trying to protect their own interests versus protecting their own volunteers?  Maybe the initial contact -- a 23-year-old staffer might not know it was a crime -- but certainly the higher ups should have known.  A criminal defense attorney told me this is the exact crime that Kevin Spacey has been charged with and he faces being convicted of a felony plus a five-year prison sentence.

Jeffries left the campaign shortly after the incident, but she states she still is a Sanders supporter.

I then asked why she had not written about it then; why she waited almost three years.  She replied “I did write about it - pitched it to dozens of pubs.  None were interested.  Not even letters to the editor.”  Ms. Jeffries thinks it is because of hearing from others that she has now been published.

I think she could not be more wrong.  If she were a volunteer for the Kasich or Trump campaigns, her article would have been published and then republished all over the country.  The press would have dug in and found out as Robinson said there were sexual harassment charges within the campaign “all the time.”  It would have been an explosive story.

The press did not want the story because they favored Bernie.   They had adopted Bernie as the anti-Hillary candidate.  Bernie was adored by the press.  They knew if they dug into this it would seriously harm his campaign.  Just as they let him brush the charges off when they came forward by him stating “I was a little busy running around the country.”

Why is the press covering this now?  My analysis is two reasons.  First, because of the Me Too movement.  Second and more importantly, they don’t need Bernie now.  They will have a couple of dozen Bernie clones saying the same socialist ideas without the disheveled, old man who will never get elected.  They have new young and more attractive candidates to carry the torch for their ideals.

Ms. Jeffries was mistreated by the Sanders campaign.   Though they were not responsible for the initial act their behavior did not protect a young lady who deserved better.   The national press deserted her also ignoring someone who was sexually assaulted and had a story to tell. They are all guilty of malfeasance.

There often is a deeper story than the MSM would lead you to believe.  And the story is not always in their pages, but often the ones they refuse to print.   They are too busy dreaming about dancing Russians to actually cover the news.