It’s Time to Give Up on Them – The Anti-Trumpers

Bruce Bialosky
|
Posted: Sep 02, 2018 12:01 AM
Share   Tweet
The opinions expressed by columnists are their own and do not necessarily represent the views of Townhall.com. 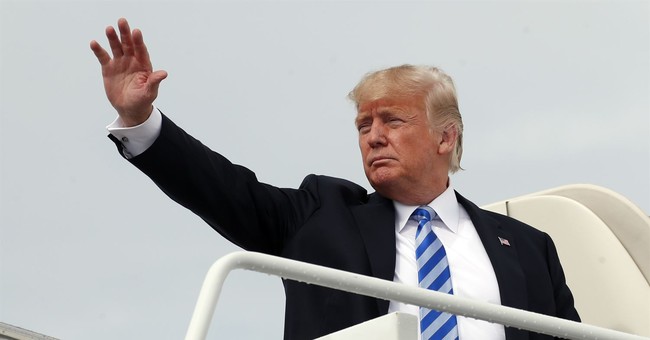 I am sure you have tried just like I have.  Every time you make a point based on facts it does not matter – you are shot down.  It does not matter what good is being done or who has benefited. You will never convince them there is redemption.  He could cure cancer, create world peace or jump into a fire and save a relative of theirs; but, still no salvation.  There will be no acceptance and no atonement.  He is a lost cause and convincing them otherwise is like nailing jello to a tree.

This was recently displayed again when I was meeting with a friend.   I received an alert stating that the United States had again been ranked No. 1 on the Competitive Index according to the International Institute for Management Development in Switzerland.  We had slipped from that spot in 2016 and were slotted in at No. 4 in 2017. This is a ranking of competitiveness on the global business stage.  One would think that any American would be happy about this development since it means our country is doing better in the world compared to other economies, and that means more Americans would be employed and thus self-sufficient.  My thought is the bastion of freedom and capitalism, America, should always be No. 1.

Even though I never mentioned President Trump, my friend leapt at the opportunity to attack Trump stating (and I paraphrase) that there was no redemption for Trump in his eyes.  I then commented as I always do that it is about the policies for me.

Since what I showed him was about the economy, I brought up that the unemployment rate for women is 3.9 percent -- the national average.  He did not react.  I then stated that the unemployment rate for blacks is its lowest in history.  He responded by stating “But what kind of jobs are those?”  I did not respond that they are full-time jobs, unlike during the Obama era when the employment numbers were feathered by part-time employment.

What about the insensitivity to the fact that someone having a job as opposed to being unemployed is something that raises the humanity of that person and their self-image?   You can’t get a better job if you don’t have a work history by being employed.  I wanted to hand him the book I read about In-N-Out Burger by Stacy Perman, where almost all their managers and top leaders started out by sweeping the parking lots and worked their way through the company.

This came on the heels of a recent discussion with a family member.  When that person brought up Trump they spewed a venomous barrage of how disgusting a person he is, indicating there clearly is no salvation for him.  When they mentioned his lies (which is a favorite topic of Trump haters), I brought up the fact that he lies about unimportant things and asked that person to name one lie of significance.  Of course, I heard nothing.  I asked to be given one that equals “You want to keep your health plan, you can keep your health plan.”  I stated my wife and I wanted to keep our health plan and could not because of Obamacare.   Or how about lying about the money that was returned to Iran?  These are significant lies that have consequences and effect/costs lives.   Exaggerating the size of the crowd at Trump’s inauguration affected no one.  It hurt no one.

It stands to reason why people feel everything is wrong when individuals in the public eye have similar or worse things vomiting from their mouths.  Bill Maher recently stated on his HBO show “I feel like the bottom has to fall out at some point, and by the way, I’m hoping for it because I think one way you get rid of Trump is a crashing economy.”  Otherwise, he is praying for millions of Americans to suffer economically just because of his perverse hatred of Trump.  That is while he and his comrades will maintain their opulent lifestyles.

When did internationally known celebrities get license to go on national television broadcasts like Robert De Niro and yell obscenities at the president?

I have been active in national politics since 1980.  I have had huge philosophical differences with some political people and I found some of their actions deplorable, but I never had this unhealthy inner rage some people have about Trump.  To them nothing he could do would ever be commendable.  I applaud any elected official who does something I think makes sense, but I could never harbor such ill feelings for anyone (except maybe Stalin, Hitler, Pol Pot, Che Guevara – all mass murderers).

I feel sorry for them. It is obvious they will never be converted on this matter.  If you bring up a political point with them that has nothing to do with Trump, they reflexively attack Trump for something non-germane to the topic.  There are other matters in this country of concern other than our president, but they don’t accept that.

There are plenty of Americans who are open to seeing that Trump’s policies are improving the lives of many Americans and appreciate those actions.  They don’t focus on the Trump sideshow.

We need to focus on those people, but the others are a waste of effort and can just bring you heartache and/or heartburn.