Voting Out Pelosi Will Not Happen

Bruce Bialosky
|
Posted: Aug 19, 2018 12:01 AM
Share   Tweet
The opinions expressed by columnists are their own and do not necessarily represent the views of Townhall.com. 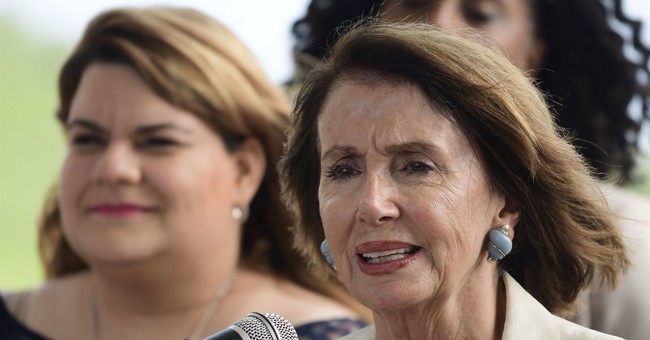 You may have heard that we are having an election on November 6th (known as our midterms). Everything seems to revolve around the presidency these days, and that office is only halfway through its term.  The MSM is all aflutter about their allies, the Democrats and Leftists, ringing up losses they declare as moral victories. But, they are “close” losses.  Occasionally a Dem wins, validating his or her cause.  Now their party is pushing a crop of candidates who say if they get to Congress they will not vote for Nancy Pelosi for Speaker of the House.  That is bullpucky.

The current rage of the Left-wing media is to emphasize how many candidates have said they will not vote for Pelosi for Speaker.  In an August 10, 2018, article on NBC News by Jack Bohrer and Ali Vitali, they stated 51 candidates had run away from Pelosi.  NBC was so motivated by this story, which was then echo-chambered throughout the rest of the Left-wing press, they actually surveyed all the candidates.  Forty-two fresh meat Dems and 9 current officeholders have come out against the Queen of the Bay.

They said they were against Pelosi because they are in districts where she is as popular as cow dung.  Their crack team of professional handlers told the candidates to run to a microphone and announce their dis-allegiance to the Empress of Free Needle Town.

Don’t buy it, America.  If you vote for these people and put them in Congress, therefore allowing the Dems to take control of the House, Pelosi will head up their team.  You say to me “Bialosky, how can you be so certain of this?” Let me tell you why it is as certain as the sun coming up tomorrow, and I do not do predictions.  This is not a prediction because it is a certainty.

I have studied the Blue Dog Democrats (supposedly moderate Dems) for a long, long time.  I wrote this column about them nine years ago.  I have not written much about them since because they don’t really exist anymore. They were wiped out in 2010 and then the final knife was put into the group in 2012.  Currently they barely exist.

Rahm Emanuel, the now failed Mayor of Chicago, convinced a group of people in 2006 and again in 2008 to run as Democrats in the districts that Dems could only win with a non-Leftist individual.  They won many seats in those years and the Dems took control in 2007. However, because Bush was president, they could not get their agenda passed so they had to wait until 2009 when Obama became president.  The Blue Dogs went along with the agenda of Obama, Pelosi and Harry Reid.  Talk about love them and leave them.  The Blue Dogs were wiped out in the 2010 midterms because they voted for the Left-wing agenda and lost their House seats.

The only people remaining in the Democrat Caucus were the hardcore Left-wingers from the gerrymandered districts where Republicans could not win.   They remain loyal to Pelosi.  They still do today.  She does the job for them.  She raises bushels of money from her rich friends and she keeps the caucus in line.  Tim Ryan (D-OH) has no chance with these long-time Lefties.

The new folks will want their committee assignments.  They are not going to vote for a sure loser and end up in an office the size of your laundry room.

Ms. Pelosi comes as speaker with all her friends that she has bought over the years.  People like Auntie Maxine (Waters) who have been aching to control the committees they are on and wield the gavel with an iron fist.  Waters would take over the Financial Services Committee in the House.   If you think Barney Frank was bad with his Dodd-Frank bill that destroyed community banking in the United States, then wait until you see Committee Chair Waters.  This is a woman who during the throes of the mortgage crisis (reminder: the principal cause was the government and Congress) recommended that if people can pay rent they should be able to get a loan.

Think about that.  If you can pay rent, you should be able to get a mortgage.  That means largely a no-money-down loan and then no reserves for repairs which are constant when you own your own place.  This would be the philosophy of the Financial Services Committee Chair of the U.S. Congress.

Pelosi will be in charge of the Democrat Caucus until she retires, or possibly, if they don’t win control of Congress.  The new people calling for new blood will fall in line and once again be used as expendables by Pelosi and her team.  Maybe not immediately because they will not have control (because of Trump), but 2020 would be their goal to elect a Dem as president and then make the new members of Congress superfluous once again.

The safest way forward is to not fall into their trap and bite on their lies about independence from Pelosi.  The Left controls the Caucus and Pelosi is firmly in charge.  Don’t fall for their game.