What Are the Blue Dogs Thinking? 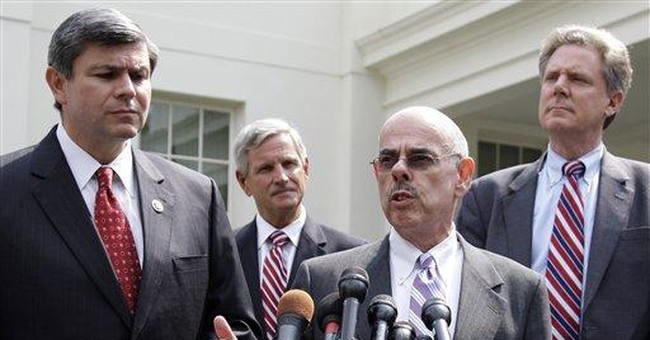 Politics is a team sport. People who do not realize that live on the fringes and generally are unsuccessful in getting anything done. There are often people on your team who you do not really appreciate for their character or policy priorities. But why the Blue Dog Democrats have bought onto the policies of the current House leadership is beyond me.

My Democratic friends often confront me about my involvement in Republican politics. These people often focus on the issue of abortion since my leanings are somewhat different then most of the members of my party. I make clear to friends that I agree with 85% or more of my fellow Republicans’ positions. That is why we are a party. I therefore do not get where the Blue Dog Democrats agree with what the leadership of Congress is doing and why they do not revolt.

The Blue Dogs were formed in 1995, long before the current Congress. On their website, they state they are fiscally conservative Democrats with the goal of being in the center of the political spectrum and adhering to the mainstream values of the American public. Their numbers have grown significantly in the last three elections, with 28 of the 52 current members being from those three classes. 32 of the 52 would be considered from Republican leaning states. A few of the remainder are in sections of Democratic states that lean Republican. There are a few like Loretta Sanchez from California that just make you wonder what she is doing as part of this group. She would in no way be considered a moderate and probably is just attempting to cover her behind because she hails from Orange County, an area that is traditionally Republican.

Though the group has become large and significant in the recent health insurance reform discussion, day-to-day it is essentially powerless. There are only two members who chair committees. Those committees are of lesser importance -- the Science and Technology Committee and the Agriculture Committee. The leadership of all the other committees, including Judiciary, Foreign Affairs, Ways and Means, Budget, Appropriations, Energy and Commerce, Armed Services, Financial Services and The Rules Committee, are in the hands of the most left-wing members of the Democratic caucus. The leadership of the House is made up of avowed left-wing members, except possibly for Steny Hoyer who was a sop to more moderate members of the delegation when he was elected.

The leadership of the House and the major committees hail from districts that are some of the most left-wing in the country and have virtually no chance of being defeated in an election. Recently, a friend forwarded me a newsletter from Howard Berman, Chair of the Foreign Relations Committee. My friend suggested that we find someone to run against Berman and defeat him in the next election. I told my friend because of the Berman’s district that there is a greater chance of Cal Poly Pomona defeating Oklahoma in a football game than Berman losing the election. His seat is for life.

The Blue Dogs hail from districts that lean Republican or slightly Democrat. In an election where the country turns against the incumbent Democrats, their heads will be the first to roll. Neither Nancy Pelosi nor Henry Waxman will be losing in their extremely left-wing districts.

That is why Pelosi, Waxman and Obama are trying to push this legislation through now. It is bad enough that these Blue Dogs who espouse fiscal conservatism voted for a bloated budget and the Stimulus Bill. They then went along with the Cap and Trade Bill, which could be the largest tax increase in American history if it passes. Now Pelosi and Waxman are trying to convince them to swallow a health care bill that is highly unpopular.

The Blue Dogs are beginning to revolt, but as yet they still do not have a clue. For example, a lot of these members are anti-abortion, yet Waxman stuck federal funding for abortion in the bill with the hope that either no one would notice or that the Blue Dogs would fall in line. Maybe this is why the Blue Dogs are many of the Congressmen who are suffering at the town hall meetings as their constituents revolt.

Since a lot of these members are conservative socially (pro-gun, anti-abortion), indicate they are conservative fiscally and hail from the center of the country, I cannot imagine what they truly have in common with their leadership. Sitting down with Nancy Pelosi and Jim Clyburn (majority whip), what could they possibly talk about? As I stated, you don’t have to agree on everything, but what the Blue Dogs must have in common with these people politically is way below the minimum level to assert they have similar interests.

The Blue Dogs are largely people who were convinced by the likes of Rahm Emanuel that the Republicans were unpopular, so they should become Democrats and Emanuel will make them Congressmen. The left-wing realized their politics would never sell in the rest of the country, but they could sucker others into becoming members so that the left-wing could take control.

The Blue Dogs need to realize that Nancy Pelosi is Marshall Petain. She is sending them into to battle not caring whether they survive – just hoping to win the war. The Blue Dogs may be lost, but the left will still achieve their goal through an extreme environmental bill and the move toward nationalized health care. Pelosi and Waxman have waited over 30 years to achieve the radicalization of our government, and the Blue Dogs will be sacrificed in the process. To Pelosi and Waxman, the loss of some conservative Democrats is nothing compared to achieving that goal.