Bruce Bialosky
|
Posted: Jul 29, 2018 12:01 AM
Share   Tweet
The opinions expressed by columnists are their own and do not necessarily represent the views of Townhall.com. 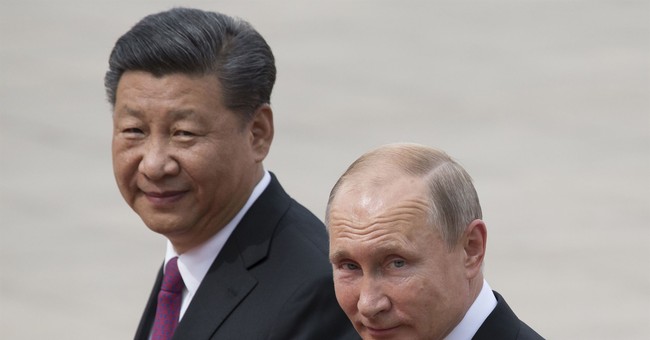 “You have been watching perhaps one of the most disgraceful performances by an American president at a summit in front of a Russian leader," said CNN anchor Anderson Cooper.  That was pretty much the standard reaction to the press conference President Trump held with Vladimir Putin in Helsinki.  President Trump should have been less defensive and more assertive in support of our intelligence agencies simply to refocus our efforts to protect ourselves from our real world adversary – China.

Either due to lack of historical perspective or Trump Derangement Syndrome, the reaction to the Trump-Putin press conference was egregious.  The principal reason we are concerning ourselves with Russia’s election tampering is because Hillary Clinton lost.  If she would have won, this would have been swept under the rug.  After all, President Obama did virtually nothing to stop Putin for eight years starting with capitulation on missile defense for our NATO allies. The Intelligence agencies did virtually nothing to stop the hacking during Obama’s term.  For John Brennan, former Director of the CIA, to carp about Trump’s actions toward Putin when his operation was a near complete failure under his leadership is the ultimate act of chutzpah.

A major problem is that, akin to how Democrats have totally melded the idea of “illegal” immigration with “legal” immigration into solely “immigration,” they have successfully combined the issue of Russia’s meddling in the election (which happened) and whether there has been collusion with anyone involved in the Trump campaign (which after over two years of investigation there is no proof of happening).  Trump has not effectively decoupled the issues.

In addition, you would think Trump gave away the store (half of Europe) like FDR did to Stalin in 1945.  Let’s get a little perspective.  As delineated by David Herszenhorn in the left-leaning Politico, “But the Russian president seemingly won nothing in the form of concrete concessions: No recognition of the annexation of Crimea; no rescinding of economic sanctions; no readmission into the G8; no recommitment by the U.S. to the Iran nuclear deal; no reversal of Trump’s opposition to the Nord Stream 2 gas pipeline; not even a firm commitment on new cooperation in Syria, which Putin had made a priority.”

In fact, the only discernible action after the summit was the announcement of $200 million of military aid to Ukraine. The U.S. also rejected Putin’s suggested referendum in Eastern Ukraine which would be perceived as rigged by most of the world. Not exactly appeasement to Putin.

With the attempt to excuse the Clinton loss and hide other malfeasance by the Democrats, we have lost total perspective on this issue.  As stated by Steve Cohen, NYU Professor Emeritus of Russian Studies, “I've never seen anything like it in my life, the reaction by most of the media, Democrats and anti-Trump people is like mob violence."  Cohen said it's been common since World War II for the U.S. president to meet with the leader of the Kremlin, "in order to avoid nuclear war between the two superpowers."  Was it more important that Trump avoid war with Russia or for him to stick a finger in Putin’s eye over hacking done in 2016?  I pick staying out of war to be more important.

For those who would argue that these positions are soft on Russia, let me refresh your recollection.  This column has called for reestablishing the missile defense system in Poland and the Baltic States and for arming the Ukrainians.  The idea of moving some of our troops to Poland from Germany makes tremendous sense to further deter Russian aggression.

More importantly, the perverse focus on Russia because of the embarrassment of the Democrats has allowed our true No. 1 adversary, China, to skate.

Dan Coats, Director of National Intelligence, stated that there are four countries (Iran, North Korea, China and Russia) that are actively cyberattacking our country.  One must ask why the focus is on one country and the others can slide -- particularly China, the biggest?

To get perspective, per the World Bank, Russia has five times the population of Texas – 144 million to 29.3 million.  Yet the GDP of Texas is $1.7 trillion compared to Russia’s meager $1.28 trillion.

Compare that to China.  The population as of 2016 is estimated at 1.379 billion.  The GDP as of 2017 was reported at $12.2 trillion, which is nearly 10 times the GDP of Russia.  Since both countries are making geo-political moves to counter us -- aiding Iran, hacking into our systems regularly -- which should we focus on; which is the bigger concern?  The one with all the money and a growing economy or the one that was characterized by John McCain as a “gas station masquerading as a country?”

China has a trade balance advantage of $375 billion with the U.S. as of 2017.  Our trade deficit in 2017 with Russia is $10 billion.  Which country has greater effect on our day-to-day lives?

Let’s look at just one of the multitudes of problems with the Chinese while ignoring others like their blatant disregard for the environment. That one problem is their aggressive, hegemonic activities in the South China Sea.   Two years ago they were rebuked by an international tribunal for their activities yet they forged forward uninterrupted.  While they continue building their military position there, they are threatening and bullying neighboring countries like Vietnam, stopping them from drilling in their exclusive economic zone. China has bullied Brunei, Malaysia and the Philippines into joint development projects in their own economic zones, establishing joint claims to the areas.  The U.S. government under Obama and now Trump has refused to press China on these issues.

The North Korea problem would not exist without the aid of China.  America has abandoned Tibet and many would abandon Taiwan to appease the dictator running China.   China goes virtually unchallenged on these issues while our country focuses on Russia as if a tornado were bearing down on us.

It is legitimate to question whether our president should meet with a leader who runs a foreign country like Putin with a record of deplorable actions a mile long.  That choice by our Constitution is the president’s.  I happen to believe talking nice while exhibiting strong policies is preferable to not talking and appeasement.  If you don’t like Trump’s choices, show up on November 3, 2020.

In the meantime, the disruption in our society over 2016 election meddling that has been determined to at best have had minimal effect, if any, feeds the narrative on which Putin thrives. Continuing accusations of collusion that have been investigated for two years with no charges being files and name calling President Trump as if he is a Judas hands Putin further vindication of his tactics.

Democrats and Never-Trumpers, you need to do some introspection as to who is really aiding and abetting the Russians.