The FBI Needs to Be Turned on Its Head

Bruce Bialosky
|
Posted: Jun 24, 2018 12:01 AM
Share   Tweet
The opinions expressed by columnists are their own and do not necessarily represent the views of Townhall.com. 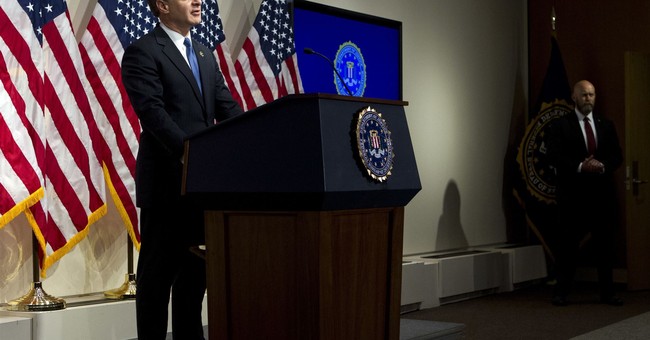 Unless you have been hiding on a South Seas island, you have become quite aware of the Justice Department Inspector General’s (IG) report released regarding the Clinton Investigation plus more. There are so many points here, but let’s focus on the most important ones:

1. This has nothing to do with the everyday men and women of the FBI. FBI Director Christopher Wray should stop hiding behind them like his mother’s skirt. This is all about the leadership of the FBI – the seventh floor of the building.

2. There was a culture created and protected that allowed a definitive bias to exist during the 2016 election and beyond in that group. That is on Comey’s head and there is no evidence Wray has obliterated that culture.

3. The fact that Peter Strzok and Lisa Page exchanged so many damning text messages on their FBI devices is evidence of that culture. We, in private industry, learned long ago that all of our emails/texts are subject to review at a further time. Strzok and Page most likely knew that because they had seen it used against FBI suspects. They went ahead with their communications anyway. There is only one rationale for their behavior. They thought they would never be looked at. They thought they were above the law because they thought they were the law.

4. Now that all the leadership has been alerted to the fact that they should not communicate their deeply-prejudicial political views on FBI devices should not mean they are just transferred to private devices. Wray’s comment that he will initiate bias training will not alleviate the bias any more than Howard Schultz shutting down Starbucks for racial bias training will alleviate racial bias.

5. The fact that FBI agents were being hosted by members of the media for golf outings and meals staggers the imagination. The vast majority of them did not even have authorization to communicate with the press.

6. There are a lot of reasons to question the wisdom and leadership of James Comey. But we now have one that is irrefutable. This man did not know that Huma Abedin was married to Anthony Weiner. How out of touch can one person be? I could go on with snarky remarks amplifying this astonishing fact, but all one has to say is: REALLY?

7. Why was Comey involved in the Clinton decision anyway? When AG Lynch had her meeting with former President Clinton and then lied to the public that the discussion was about grandchildren, she finally had to fess up and step aside. Why did her number

two not take over like when AG Sessions stepped aside? No one seems to have asked that. Why did it fall to Comey to make the decision whether to indict Clinton?

8. Some of the texts in the report were ones that were sent to Congress with incremental parts redacted. That means there is an active cabal within the FBI to hide information from us and our elected officials responsible for their oversight. That means Wray is not doing the job. That means Wray should be fired. The New FBI Director/acting FBI Director should immediately release all information unredacted to Congress and stop hiding behind the lie of “national security.”

9. Why did it take a congressman to provide the names of lawyer #2 and #5? Why did the IG hold back these names that sent inflammatory texts? The FBI stated they were working in counterintelligence when they were not. Why do they continue to treat us and our elected officials like children? Another reason the seventh floor needs to be swept clean.

11. It is almost impossible to believe that people like Strozk and Page and others who harbored great animus toward Trump did not allow any of that animus to invade their work on the Clinton or Trump investigations. It defies almost any experience I have had in my life. It is possible, but the chances are the same for me flying to Mars.

12. Here is something to think about: The IG stated they could find no bias in the decisions made. Yet we discover through the report that Comey either inappropriately or illegally had used a private email address to perform FBI business. Thus, he was guilty of doing the same improper behavior Ms. Clinton was excused of in the investigation. Is it not possible that Comey knew if he endorsed indictment of Clinton his own malfeasance would come out and thus that drove his decision? Isn’t that bias?

13. As an aside, this report brought out that President Obama lied. And I thought Trump was the only president who lied. The report validated that Obama lied about when he knew that Clinton had a private server. But this should have been known two years ago if we had a functional press at the time. Obama had to be getting emails from her private email address as opposed to Hillary@secretaryofstate.gov. Didn’t he see that and say to himself “Why is Hil sending me an email from a private email address?” He neither said anything about it nor put a stop to it. He just lied about it when asked.

Of the tens of thousands of words I have read about this report, these words from the editors of the Investor’s Business Daily are my favorites: “But look at the report in its totality and you see that time and again officials made ‘judgment calls’ that weakened their investigation. In other words, from the range of options available to them, they consistently chose the less aggressive course of action.”

Here is another thought from the best source for analysis of these matters, Andy McCarthy;

“It has become a refrain among defenders of the FBI and Justice Department that critics are trying to destroy these vital institutions. In point of fact, these agencies are doing yeoman’s work destroying themselves — much to the chagrin of those of us who spent much of our professional lives proudly carrying out their mission.”

Don’t take the IG’s statement that he found no bias as it has been twisted by some. He found nothing that said “I am tanking this investigation to make sure Clinton wins and Trump loses.” This report clearly displays the FBI was out of control. It is still out of control evidenced by their belligerent attitude toward delivering subpoenaed information to our elected officials.

This organization needs a gutting at the top.