Bruce Bialosky
|
Posted: Sep 10, 2017 12:01 AM
Share   Tweet
The opinions expressed by columnists are their own and do not necessarily represent the views of Townhall.com. 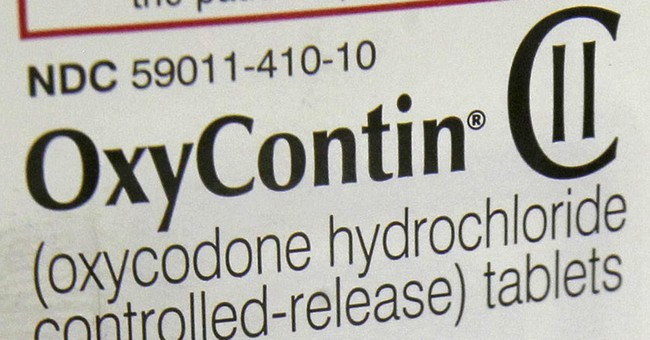 The next three weeks we will look at possibly the largest and most dangerous crisis facing America. Please join us in taking an in depth look at the challenge for America.

If you were around in the 1980s, you’ll likely recall HIV/AIDS bursting on the scene with a vengeance. AIDS spread through the consciousness of America even faster than the disease. Who was exposed? Where did it come from? Today another epidemic has exploded into the minds of America that has everyone just as befuddled – opioids. People are dying in mass numbers and no one has totally wrapped their heads around the problem to solve it.

The numbers are staggering. For people under the age of 50, opioids are the single largest cause of death. More than cancer, more than auto accidents, more than gun violence, more than any other cause. In fact, opioids were a greater cause of death in 2015 than HIV/AIDS was in 1995.

To give you a perspective, in 2015 there were 52,404 people who died from a drug overdose as stated by the CDC (Center for Disease Control and Prevention). Of that number, 33,091 involved an opioid. You might question that number since that includes heroin (which is an opioid). It is estimated that there are now 600,000 people using heroin in the United States and a full 80 percent started using prescription opioids, whether legally or illegally obtained. There are another estimated 1,900,000 Americans who currently either misuse opioids or have an opioid misuse disorder.

The idea is not to bury you in statistics, but provide the massive scope of the problem. Don’t think this is someone else’s problem because if you do, you are sadly mistaken. This can become your problem quite quickly when a teenage child has an accident either from an athletic, skiing, driving incident or illegally abuses these dangerous drugs. They begin to use a prescription provided to them by medical professionals to relieve the pain from the procedure or off the street/from a friend and boom – they are soon addicted. Their life – not to mention your life -- is ruined. If you don’t believe that could happen, it is happening right now with close to 100 people dying every day.

Like many other parents, Gary Mendell started confronting this challenge. Mendell was running his successful hotel business when he came to realize his son, Brian, was dealing with an opioid problem. For almost 10 years, Brian dealt with the challenge of addiction and all the negative aspects of life accompanying that. Brian lost his life in October 2011, but the world found a new leader on this issue -- his father.

Gary Mendell started seeing that there was really no national organization to confront the challenge. Mendell dug into educating himself to a different level and resolving the issue. He learned that eight of 10 of those who become addicted do so before their 18th birthday prior to their brains being fully developed. This led him to form Shatterproof (www.shatterproof.org). Mendell has thrown himself into the work behind this problem while putting the operation of his business in the hands of trusted lieutenants. He now works full-time to help others from suffering the same fate as his beloved son.

In my discussions with Mendell, I found him to be a different kind of non-profit guy. He was not someone brought up through the non-profit environment. He is a business guy and looks toward results, not committee meetings. He has become the go-to-guy for major publications on the topic and consulted Governor Chris Christie on the Presidential Commission of Combating Drug Addiction and the Opioid Crisis. Gary became my main reference point for becoming educated on the depth of the opioid problem.

Where did this all start? As stated by Mendell, “This started with the change in prescribing practices initiated by the FDA (Food and Drug Administration) approval of OxyContin in 1995.”

Between 1999-2014, the number of opioid drugs prescribed quadrupled. The number of people who died from opioids (prescription opioids and heroin) also quadrupled. From 2000-2015, roughly 500,000 Americans died from drug overdoses.

Why is it important to tie heroin together with prescription opioids? Many people become addicted to prescription opioids and then no longer have access to the medication. To alleviate the effects of their addiction, they turn to inexpensive, readily-available heroin.

The problem exploded though with prescription medications. The common types are oxycodone (OxyContin), Percocet, hydrocodone (Vicodin), morphine and methadone. Many of these are available illegally on the streets. Heroin has been around for a long while and is well known. The one that is most concerning is Fentanyl which is a synthetic opioid and can be 50 to 100 times more powerful than morphine. It is widely used as a safe surgical anesthetic, but has recently been fabricated illegally in places like China in a highly-potent, deadly form.

The fact that adolescents are the most exposed to opioid addiction falls in line with scientific work directed at the age group. One prominent study was performed in June 2011 through Columbia University and is known in common nomenclature as the CASA study.

This study addresses the normal issues of the age group such as peer pressure, adverse childhood events based around abuse or trauma, genetic predisposition or engaging in other unhealthy behavior like risky driving, violent behavior or unsafe sex.

This results quite often in similiar negative implications in their lives. Users of baseline drugs like tobacco, alcohol or marijuana are twice as likely to receive poor grades in school. They are also more prone to have underage sex.

The most troubling is how the behavior of their grown relatives spurs their errant behavior. We all know how parents can establish good examples for teenagers being hardworking, committed family members, but the flip side -- poor role models -- can be devastating. Nearly half (45.4%) of teenagers live with a parent who is a risky substance user. Worse, 17.8% of children under 18 years old live with an adult (most likely a parent) who has a full-fledged substance abuse disorder.

The most debilitating fact is the parents don’t seem to care. Less than half (42.6%) list personally refraining from tobacco, alcohol, marijuana or abusing prescription or illicit drugs as one of their top three concerns for their teenage children. When parents are setting such a meager example, it follows that we might have poor results from the teenagers in our society.

That would be immensely meaningful on its own, but then the CASA study defines the risks involved because of adolescent physiology. The overriding fact is that the teen brain is more vulnerable to addictive substances. As stated by the study, “A growing body of evidence suggests that due to this increased sensitivity, addictive substances physically alter the reward centers of the brain faster and more intensely in adolescents than in adults, heightening their vulnerability to addiction.”

During adolescent years the area of the brain related to such things as judgment, impulse control and decision making dramatically change in a manner that brings the brain to a fully-developed state. The primary transmitter signaling pleasure is dopamine. Dopamine decreases by a third as adolescents mature to adults. But dopamine initially spikes before falling which may lead to risk-taking behavior as teens seek external sensations.

It is this combination of risk-taking and increased sensation that leads to engaging in behavior while the adolescent’s brain is still developing, thus making it more susceptible to addiction.

The CASA study states, “A growing body of evidence suggests that due to this increased sensitivity, addictive substances physically alter the reward centers of the brain faster and more intensely in adolescents than in adults, heightening their vulnerability to addiction.”

The study found that addictive substances have a longer-lasting effect on teens and, more importantly, that teens are more prone to developing addiction and a lifetime of drug abuse. That accounts for why so many teens end up using opioids, becoming addicted to them and dying from them.

Next week: We look at the breadth and depth of the opioid problem