I Don’t Recall, I Am Not Responsible, But Vote for Me for President

Bruce Bialosky
|
Posted: Oct 23, 2016 12:01 AM
Share   Tweet
The opinions expressed by columnists are their own and do not necessarily represent the views of Townhall.com. 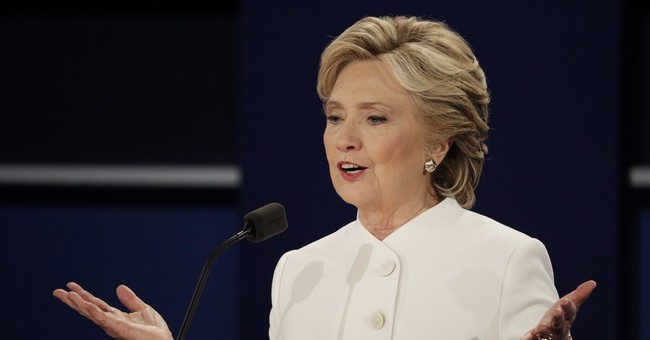 In an election that seems to not want to focus on the issues of the campaign, let us at least focus on important matters regarding this election. Ms. Clinton, who has disappeared from the Mainstream Media, has asked Americans to support her while she has consistently displayed attributes no one would want in a Girl Scout leader -- let alone a president.

Leadership means something. We all know that there are times when our leaders have fall guys; i.e., people who fall on their swords to protect the top leader or, in this case, our president. Going into a voting booth, you want to have an idea that the person in charge will not cower in the face of responsibility. Leadership means taking responsibility.

There are three incidents of major proportion that show Hillary Clinton shirks responsibility or states she flat out does not remember anything about the actions of her underlings.

First, Ms. Clinton told the FBI 40 times that should could not recall the matters about which she was asked. This would not be a big deal if the questions were about yoga or her daughter’s wedding, but they were about significant questions regarding her decision making and duties as Secretary of State.

I reviewed the 40 items she could not recall and, to be fair to Ms. Clinton, a few of the items were procedural that you or I would have forgotten. But others were not. She tells us that cybersecurity is of upmost importance to her, but cannot remember any briefings or training regarding record retention or handling of classified information. There was a series of questions the FBI asked about specific emails that were redacted to us. It would seem these were chosen because of their significance and being of a highly-classified nature. Yet Ms. Clinton cannot remember any of them. She also seems to have forgotten who Sidney Blumenthal was and her communications with him.

It appears that there are a large number of these items that Ms. Clinton cannot seem to remember that would give voters pause as to whether she told the truth to the FBI or whether she has early-onset dementia.

Second, there are the responses to the questions from Judicial Watch which were under oath and were ordered by a federal judge. If you take the time to read them (please don’t; I will save you the pain) you learn something that is really clear: if Hillary Clinton is elected president of the United States, we will be marred in a malaise of legalese. Surely her responses should be reviewed by her lawyers, but the question is whether she even read the responses before they were submitted. This is a continuation of the legal tactic -- “baffle them with horse manure” --that her husband perfected while in office and Obama has perpetuated. The average citizen soon will have to have an attorney just to deal with any matters with its government.

But again the most common statement in her answers was “Secretary Clinton does not recall.” If it were not such a serious matter you would think this lady was either highly medicated or a stoner. Her memory of the official matters she dealt with is dismal. But somehow she remembers Colin Powell telling her to use a private email account at a cocktail party.

The one aspect of being a leader that is most important is knowing when to delegate and knowing how to put limits on that delegating. President Carter was famous for supposedly controlling who played on the White House tennis court. Then there are extremes the other way.

Ms. Clinton famously was unaware of the security requests from her people in Libya (oh, that old canard). There were 600 requests or expressions of concern for improving the security there that Secretary Clinton said never reached her desk.

There are two distinct problems here. Ms. Clinton spoke of her close relationship with Ambassador Chris Stevens. It is hard to believe that with all those levels of concern coming from Libya that Stevens never brought them directly to the attention of Ms. Clinton.

The second is the level of mismanagement. There is delegation and then there is irresponsibly being out of touch with your underlings. There is setting proper parameters for when things should hit your desk. There is woeful ignorance. This was Libya, after all; not the Bahamas.

We still do not know what orders were given out to embassies in the Middle East and Northern Africa after the riots in Cairo prior to Benghazi. Why was the ambassador not moved to safer accommodations? What other procedures were put in place after Benghazi for other embassies? These answers would give us a level of confidence in Clinton’s decision making ability. We are left with none.

Secretary Clinton took responsibility for Benghazi, but then she disavowed any knowledge of any decisions that led up to the disaster and stated they were made below her pay grade.

Ms. Clinton wants us to hire her to run possibly the largest organization in the world. In the most significant situations of leadership with which she has been challenged, she has either failed in regard to proper management of her personnel or completely has no memory of her decisions. She sounds very much like John Stumpf, the now-retired CEO of Wells Fargo.

Not the attributes you want in the president of the United States.