Bruce Bialosky
|
Posted: Apr 10, 2016 12:01 AM
Share   Tweet
The opinions expressed by columnists are their own and do not necessarily represent the views of Townhall.com. 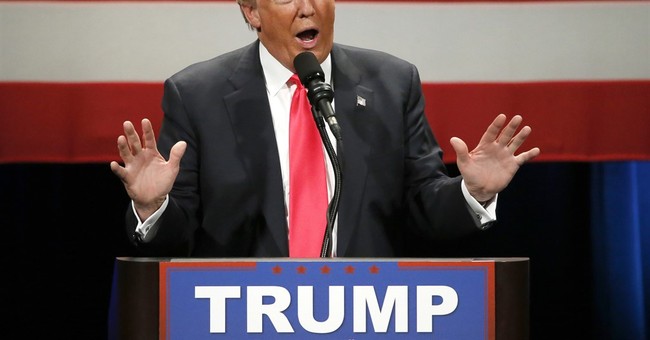 After spending two columns excoriating Donald Trump without ever speaking about his behavior, but rather focusing on policy issues, I feel compelled to defend him on two matters. That is despite it becoming ever more so challenging to defend Mr. Trump for anything based on positions he has taken on various policies. The first is the issue of violence at his rallies and the second is his being “Nazified” by some elements.

Not to be namby-pamby or perceived as a member of the chorus, but some of the things that come out of Trump’s mouth about the protesters is just plain stupid. Yes, a lot of people like myself would like to smack these people up alongside the head and think they deserve it, but neither would I ever say something like that into a microphone nor act on it. For a presidential candidate to drivel the idiotic things Trump has about protesters at his events is both unbecoming and foolish. To focus on the fact that a 78-year-old man whacked a young protester while he was flipping off the crowd seems a little perverse. If I were in my 20s and just got clocked by an old man, I would be pretty embarrassed. The fact I never saw the guy who got fore-armed on TV was because he went into hiding in shame; unfortunately, not because of his unacceptable behavior.

Let us focus on my No. 1 pet peeve: the perpetrator becoming the victim. These are dysfunctional, deranged people organized by hate groups and sent into other people’s events to attempt to “enlighten” the folks at the event in the name of free speech. They are actually suppressing free speech. They are so self-righteous in their cause and so blind to the rights of any other person. When they get thrown out or clocked like that young man, they claim to be the victims. In reality, they are the perpetrators.

My initial first-hand experience with these people was my second Republican National Convention (RNC) in 1996. We walked to the convention just as if we were walking to a sporting event (likewise held at this particular arena) in San Diego and there they were – rabid people screaming at us from across a restraining line. Screaming, their faces contorted, as if we were drunk drivers who had just run over their children. In New York, eight years later at the RNC, I was able to confront some of them and I killed them with kindness. I shook their hands, smiled at them and suggested they vote for GWB. It cured their temporarily rabidness. They then went back to screaming at the next people walking by.

You never see Republicans behaving like this for a couple of reasons. We don’t sneak into other people’s events to disrupt them because we actually respect the First Amendment. To state that someone has the right to disrupt someone else’s event because of the First Amendment is a grave distortion of the First Amendment. The second reason is we have families, we have jobs and we have better things to do than professionally travel the world disrupting in the name of our self-righteous cause. Though there are some people right of center who protest they do so in mainly a peaceful manner outside of venues.

Today there are professional grievance groups that organize through the Internet that would gladly disrupt a 5-year-old’s birthday in the name of their noble cause(s). They are:

1. Code Pink – from their website: “CODEPINK is all about taking action where it truly matters. We channel community grassroots democracy to where the power players are making (awful) decisions and make them listen.” Nothing like shoving your beliefs down others' throats. And their other name is Women for Peace. Around since 2002 they are professional disrupters.

2. MoveOn.Org - They were founded in 1998 to support Bill Clinton in his impeachment battle. From an email: “Peaceful protesters punched. Innocent people being assaulted on the street by attackers chanting, "Trump! Trump! Trump!" They send people into Trump events and encourage them to disrupt and suppress free speech and then claim to be the victims. By the way, the assault they cite in a footnote is one guy outside a Trump event. I am sure the person he attacked was totally peaceful – yeah, right.

3. Black Lives Matter – alias the KKK of the Black Community, was formed after a young man attacked a storekeeper in Ferguson, MO, and then attacked a policeman and was shot to death. They forced all of the Democrats' presidential candidates to adhere to their doctrine that only Black Lives Matter. They spew their hatred unimpeded and are actually encouraged by the left-wing Democratic establishment. Their people enter Trump events and other events with one purpose – suppression of free speech and adherence to their doctrine of only Black Lives Matter.

4. Answer – Act Now to Stop War and End Racism – These are the left of the left and certified Jew haters who ignore anything Hamas does to Israelis defending the destruction of Israel for the protection of Palestinians. They happily applaud the disruption of Trump events on their website. The only free speech that matters is theirs. These people are always organizing another protest. It makes you wonder how much anger one person can harbor.

They all step on others’ free speech in angry manners and then play the victim when someone stands up for their rights. Trump should kill them with kindness and just have the cameras turned on them while security people remove them from his events to display their behavior. Then the world will know how disgusting these people really are and not Trump in this case.

On to the constant charges of Trump being a dictator or a Nazi. First, every Republican in my lifetime after Eisenhower has been declared a Nazi. It is disgusting. Trump says a lot of ridiculous things - annoying and stupefying. To compare him to the Nazis or even George Wallace (a racist) or South American tin-pots is just low-brow arguing in some cases or complete ignorance and devaluing of the evil of Nazis. I have read thousands of pages about the Nazis; thus I have a little knowledge in this area and clearly comparing Trump to Hitler is pathetic and ignorant.

I don’t like the man or his politics. I have managed to attack him in three columns without drawing any of these unfounded analogies. If you think he is lowering the body politic, don’t lower it more by inappropriate name calling.

One last point -- our current president. I have stated before that his administration is directly responsible for us being faced with a choice between a socialist and a congenital liar (Democrats) or Trump. Recently he stated “Those who aspire to be our leaders should be trying to bring us together, and not turning us against one another – and speak out against violence, and reject efforts to spread fear or turn us against one another.” This statement is proof positive this man is totally delusional. He is the prime instigator. He never disavowed Black Lives Matter. He is the principal divider in this country. If this is how he judges a president, then by his own standards he is a complete failure.

You can be unhappy with Trump, but for the violence at his events, don’t blame him – he is not guilty this time. The perpetrators are not the victims; they are the guilty ones.