Blanketed Truth: How Obama Has Hung Us Out To Dry

Brigitte Gabriel
|
Posted: Aug 17, 2016 12:01 AM
Share   Tweet
The opinions expressed by columnists are their own and do not necessarily represent the views of Townhall.com. 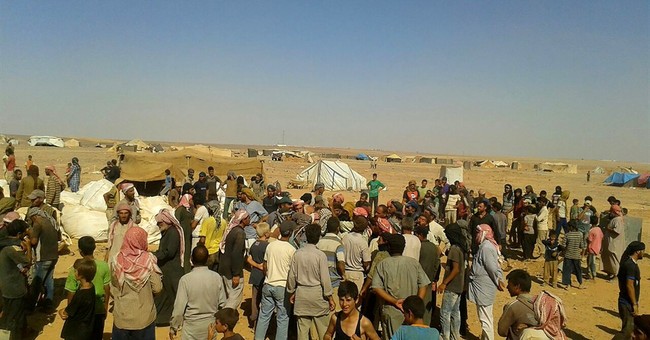 Europe is a war-zone. Its open-door refugee policy has enabled over a million migrants to enter the continent last year, many from Syria, Afghanistan, and Iraq. Europe is amassing the consequences of this disastrous program, as trepidation and pillage intensify in direct result of their refugee populations. On our side President Obama aspires to bring in 10,000 additional refugees next year, and a Hillary Clinton presidency would guarantee 65,000 more right out of the gate.

ISIS already loftily announced its infiltration of refugee populations, so your town could be next on the list to harbor an influx of jihadists-in-training. If we continue in the footsteps of European leadership, our country will surely be second in line to becoming the next hot-spot for terror operations.

The process of resettling refugees is a strategic one, sneakily coordinated between the UN and the State Department. Essentially, the United Nations High Commissioner for Refugees chooses most of the incomers, and it is under the influence of a powerful Muslim group called the Organization of Islamic Cooperation. This means that U.S.-bound refugees are coming from countries with large numbers of people who hate us, such as Somalia, Afghanistan, Iraq, and Syria.

Once the refugees are selected, the State Department distributes them to nine major federal contractors: Church World Service, Ethiopian Community Development Council, Episcopal Migration Ministries, Hebrew Immigrant Aid Society, International Rescue Committee, U.S. Committee for Refugees and Immigrants, Lutheran Immigration and Refugee Service, United States Conference of Catholic Bishops, and the World Relief Corporation. Six of these contractors are religious charities, and often play on emotion to guilt their pious volunteers into advancing their agenda. They also receive compensation for each entrant they resettle, an incentive to further romanticize resettlement programs and aggrandize “compassionate refugees” to the degree of exaltation.

Once the refugees are brought in, they are dispersed to 190 cities and towns at the jurisdiction of 350 sub-contractors. After six months, these sub-contractors submit paperwork to import the relatives of the original refugee and the whole cycle repeats itself. This program has cost the U.S. Treasury upwards of one billion dollars, not including the welfare, healthcare, and other benefits that are provided to the immigrants upon arrival. To this day, over 100,000 Somalis and 100,000 Iraqis have been resettled, with 10,000 more in the pipeline, and taxpayers like you are footing the bill.

Ushering in thousands of migrants each year has begun to take its toll on American cities. Infiltrating these communities with hordes of third-world aliens has presented a multitude of threats that extend far beyond terrorism itself. Since a lot of migrant resettlement flies under the radar, many towns are ill prepared to assimilate the surprise guests. School systems don’t have the staff to accommodate non-English speaking students, and subsidized housing languishes beneath the weight of increasing demand.

These crime rates do not exclude the climbing rape and harassment offenses, especially among female victims. Multiple occurrences in several states have been recorded: Massachusetts, Idaho, Virginia, Utah, California, North Dakota and Minnesota. All have one common theme: the perpetrators were of refugee status.

This is the pattern of disrespect Muslim immigrants display towards our women, children, and Western values.

Refugee cities have also become hubs for foreign illnesses that were once well controlled. Local health departments are experiencing an increase in communicable diseases and disorders from these populations. Cases of highly infectious bacterial diseases like active Tuberculosis have been mushrooming all across the states as recorded:

Remember, these cases will swell beyond a few isolated incidents. 22 percent of resettled refugees in the state of Minnesota alone test positive for latent Tuberculosis. It is clear this contagion is festering and uncontained.

Toxic refugee programs are more than a mere side effect, they are the virus itself. The government has concocted a lethal epidemic, and we are enabling its injection directly into America’s bloodstream.

This administration is trying to detract from the unpleasant realities of mass Muslim immigration, and the president and his cronies seem delighted to distort the facts and further propagate their embarrassing slander. It is by far the most sinister cover-up of our time. Thankfully, as a democracy, we are able to exercise our right to determine America’s fate.

ACT for America's, the nation's largest national security organization has launched the "Refugee Resettlement Working Group”, where concerned citizens can join and help protect our nation by addressing a dangerously broken U.S. refugee program. Pockets of refugees are being haphazardly tossed into our communities without adequate screening or assimilation efforts. We will reform this process, and dedicate ourselves to resolve these issues in our local communities. It all starts with you. Join us.