2010 Race of the Day UPDATE: Open Seat in Arkansas 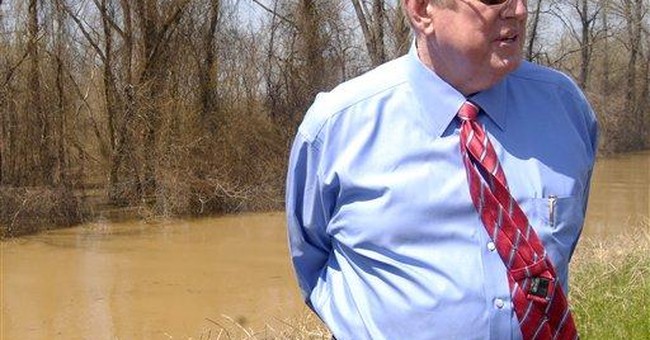 Recent polling has shown Republican Rick Crawford with an edge over Democrat Chad Causey in the race for Arkansas’ First Congressional District.  Vying to replace long-time incumbent Democrat Marion Berry, Causey has made it clear that he would continue his former boss’s failed record if voted into office.  National Democrats are clearly worried about this DC bureaucrat, who only recently returned to the district in order to run for Congress and has seen his prospects worsen.  In an attempt to salvage the campaign, where Democrats are afraid of losing a seat and reliable vote in Congress, former President Bill Clinton stumped for Causey this past week.

The amount of national attention being paid to this race by Democrats shows just how troubling the playing field is for the DCCC.  Normally reserved for candidates challenging incumbent Republicans races, AR-01 has been listed in their “Red-to-Blue”, which the name alone shows is a desperate play at keeping this seat in Democrat hands.

Be sure to keep an eye on Crawford and the race in the First District over the next fifteen days while Republicans work to turn Arkansas red.

Today’s Race of the Day is a perfect illustration of just how much opportunity Republicans have in the Deep South. Veteran Democratic Rep. Marion Berry’s open seat in Arkansas’ Delta region is well within our reach for the first time in history. Driven by a thriving agriculture industry, the Natural State’s 1st District is historically Democratic, having been won by Al Gore as recently as 2000. But last cycle, John McCain won here by a whopping 21 points.

Nestled in the northeast corner of Arkansas, the first district stretches eastward from the borders of Missouri, Tennessee and Mississippi towards Little Rock.  It encompasses 26 counties and, with a main population center of Jonesboro, also includes the cities of Newport, Mountain Home, and Stuttgart.  Heavily reliant on its agriculture industry and formed around the fertile Mississippi Delta, this seat, with a Cook PVI rating of R+9, is a prime pick-up opportunity for Republican this fall.

Small businessman and veteran Rick Crawford won the GOP primary overwhelmingly in May, and his campaign has continued to pick up momentum since then. A recent poll showed him up six points over the Democratic nominee, Govs. Mike Huckabee and Tim Pawlenty have endorsed his bid, and House Republican Leader John Boehner pledged his support to secure Crawford a seat on the Agriculture Committee, a plum assignment for a representative from this district.

If voters in the district aren’t familiar with Democrat nominee Chad Causey, they shouldn’t be surprised: he’s spent the last decade in Washington as a cog in the Obama-Pelosi machine, serving as a chief of staff for a Democratic member of the House. Causey was strongly endorsed by a liberal labor union recently, and it’s no wonder why: he’s flip-flopped on ObamaCare – first opposing it, now supporting it.

Rick Crawford is a successful small businessman, who knows the value of creating a job and earning a paycheck.  Rick operates AgWatch Network, a news network heard on radio and television throughout 5 states.  That experience has translated into Rick’s firm commitment to creating economic opportunity for the people of the first district instead of growing government to please the Democrat party bosses.

Before bringing new jobs and strong management to Arkansas, Rick served our country in the United States Army and then later in defense of our President as a member of several Secret Service details.  While Rick has served his country and his community, career bureaucrat Chad Causey has gone out of his way to serve the liberal puppet masters at the top of the Democratic Party.

Constituents will recognize Rick’s involvement in the community as a resident of Jonesboro and a member of the 4-H Foundation Board of Arkansas.  They’ll also recognize that Causey worked hand-in-hand with Washington liberals who believe more government is the answer to our challenges.