2010 Race of the Day UPDATE: Dina Titus Out of Touch in Nevada 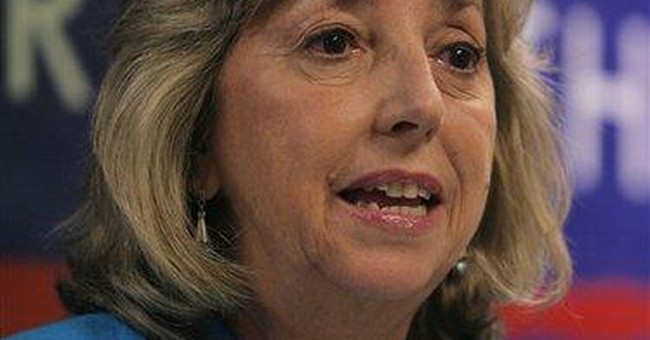 Since we first started following this race closely, Dina Titus has surprised us: she has managed to become even more liberal and out of touch with her constituents.  Titus managed to kill one of the fastest growing communities in Nevada and the region by providing easy “yes” votes for Americas favorite San Franciscan, House Speaker Nancy Pelosi.

In the short time since Titus took office in 2009, suburban Las Vegas has experienced the country’s highest foreclosure rate and Nevada’s unemployment has steadily increased – it now stands at an unbelievable 14.4%.  That is the highest rate of any state in the country.  Titus told her constituents in Las Vegas back in February 2009 that the stimulus package would create jobs.  It looks like she miscalculated – and now she’ll have to answer to voters on Election Day.

At the same time she’s working to distance herself from Washington and is having trouble recalling her own record, Titus and her liberal allies are launching baseless attacks against the Republican challenger, Dr. Joe Heck.  On issues ranging from taxes to healthcare and social security, the Democrats in Nevada have blatantly distorted Heck’s positions in an attempt to distract voters from Titus’s failed record.

With just 33 days until the election, Heck is working around the clock to give the people of Nevada’s Third District the representation they deserve.  You can visit Joe’s website to learn more about his campaign and become a part of his Operation New Direction.

Dina Titus rode the Democrat wave to victory in 2008, narrowly defeating Republican Jon Porter with just 47 percent of the vote. Without then-popular President Obama on the ticket and after several political missteps this year, Titus is in for a bumpy ride as she faces Republican Dr. Joe Heck in November.

Nevada’s Third Congressional District has always been the state’s swing district. It largely includes Clarke County, which is mostly made up of Las Vegas’ suburbs and the southern part of the strip. The district leans Democrat with a Cook Partisan Voting Index of D+2. Although it has Democrat tendencies, the district elected President George W. Bush with 50 percent of the vote in 2004 and Republican Jon Porter held the seat for three terms.

Recent polling already shows Dr. Heck beating Titus by five points. In a politically turbulent environment for Democrats and in tough economic times for Nevadans – with one of the highest unemployment rates and largest number of foreclosures in the country – the outlook is bleak for Titus. Despite having an unemployment rate of 13.7, Titus has continued to cast ‘Yes’ votes for her party’s job-killing agenda. She voted for a failed trillion-dollar stimulus, a national energy tax and a costly healthcare takeover.  These political missteps have not only cost Nevadans their jobs, but will cost her her own.

As an emergency room doctor and Army Reservist, Dr. Joe Heck has a long history of serving both our country and Nevada’s Third District. He has worked as a volunteer firefighter, a soldier fighting for our freedom oversees and a former State Senator to many constituents of the Third District. As a small business owner, healthcare provider and administrator he has the tools to address Nevada’s economic woes and healthcare needs without breaking the bank.

Dina Titus, who is incredibly out-of-touch with her middle-class constituents, has proven time and time again that her loyalty lies with her Democrat party leaders rather than Nevada families, voting with her party 97.2 percent of the time. Titus, known for her bad temper, recently stated to her Democrat House colleagues that the political environment is so volatile that she believes many of them may be “f—ed” in November. And by the looks of things, she is right.

Please take some time to check out Dr. Joe Heck’s website. You can also help him in his fight to defeat Democrat rubber-stamp Dina Titus by joining him on Facebook or following him on Twitter.