Brian McNicoll
|
Posted: Dec 18, 2020 12:01 AM
Share   Tweet
The opinions expressed by columnists are their own and do not necessarily represent the views of Townhall.com. 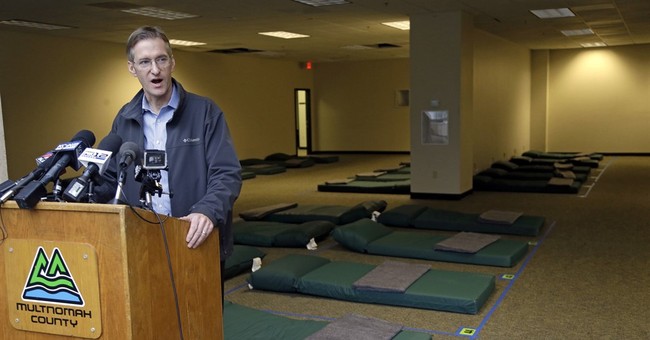 Portland Mayor Ted Wheeler has gotten tough when it comes to dealing with what has become a semi-permanent class of protesters in his city. Seattle Mayor Jenny Durkan is getting out.

Wheeler has stepped up security in the streets of Portland, become more amenable to cooperation with other law enforcement agencies to keep the peace and, even as he brokered a “solution” to a controversy over an effort to force a developer who bought a house in foreclosure to return it to its previous owner, he has warned this will be his last such deal.

As a result, even though he just won re-election, he now faces a recall effort.

Durkan, who has a year left in her first term, struggled to regain her footing after protesters declared an autonomous zone within the city and essentially forced out police and took over a neighborhood.

The problem for both was that the people who perpetrated the violence and destruction in both cities faced few consequences. Few were arrested. Those who were either were released almost immediately or, for those facing the most serious charges, bailed out by other activist groups, such as the National Lawyers Guild.

This type of activism – bailing out rioters so they can return to causing mayhem and destroying property as quickly as possible – didn’t begin with Seattle or Portland. It didn’t begin with the Minnesota Freedom Fund, touted by Kamala Harris and members of Joe Biden’s campaign staff as a way to funnel money to rioters arrested in Minneapolis.

The modern iteration of mass bail-for-troublemakers dates back to at least 2016, when leftists and some of their more well-heeled and self-interested allies were funding efforts to disrupt construction of pipelines in the upper Midwest.

Joseph Haythorn didn’t seem to have a lot going for him. He was a 26-year-old assistant computer technician assigned to jobs by a temp firm. He lived off his parents in a small town in Oregon and received a few bucks from better-off friends and lawyers with whom he worked.

But he somehow provided bail for more than 500 people arrested in connection with Dakota Access Pipeline protests in North Dakota. On one day – Oct. 27, 2016 – he spent more than $100,000 in cash to bail out more than 100 people.

Most were charged with felonies, and charges ranged from reckless endangerment to inciting a riot to felony kidnapping of a woman who said she was raped, beaten, threatened with a knife and strangled by a fellow protester earlier that year in Minnesota.

Security guards working at the pipeline were threatened with knives and kicked by horses. Two dogs were even injured – one after being hit by activists with a 2 x 4.

Haythorn got the money for the bail payments through his association with the Water Protector Legal Collective, previously known as the Red Owl Legal collective – an organization formed with support from the National Lawyers Guild, the liberal lawyer group that handled bail payments and some legal actions for protesters in Seattle and Portland.

The Water Protector Legal Collective had vowed to bail out “anyone arrested” as part of the resistance to the pipeline “without personal judgments about the quality, morality or strategic wisdom of any action.”

At least some of the Water Protector Legal Collective’s money comes from the Freshet Collective, which is run in some places by employees of Honor the Earth – which gets money from the Tides Foundation, including $63,000 marked specifically for Standing Rock protesters’ bail – and from the NoVo Foundation.

The NoVo Foundation, which also contributes to the Water Protector Legal Collective, is run by Warren Buffett’s son and the son’s wife, and almost its entire annual $182 million budget comes from Warren Buffett.

And what is Warren Buffett’s interest in fighting the Keystone Pipeline and other pipelines to move oil from the Bakken Fields of North Dakota to refineries in the Midwest? He owns the alternative – BNSF, formerly the Burlington Northern and Santa Fe railroads – and he was enjoying record traffic at record rates on those lines thanks to booming business transporting oil.

That drove up the costs of shipping agricultural products from the region, which drove down the prices for farmers in the area. And that was enough for Buffett, whose net worth of $85 billion makes him the world’s fourth-wealthiest person.

Buffett can do what he wants with his money. He can support leftist causes – he’s a Democrat, after all, and an outspoken opponent of President Trump. He can bail out rioters – even if it means giving freedom to people who attack dogs, rape women and destroy property.

But the people of the Upper Midwest have come to understand that when Buffett and others fund these activities, they’re not being good neighbors. They’re being quite the opposite.