Brian McNicoll
|
Posted: Feb 06, 2018 12:01 AM
Share   Tweet
The opinions expressed by columnists are their own and do not necessarily represent the views of Townhall.com. 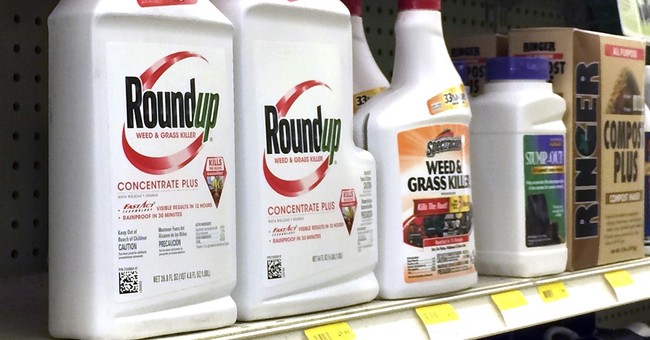 California is the quintessential nice play to visit, but you wouldn’t want to live there.

It has almost every type of weather, topography and environment one could want, but if you have to make a living there, it can be an ugly place.

It is the next-to-worst state in the union to do business. It has the most expensive labor laws in the country – a high minimum wage, closed shop and pricey workers’ compensation, short-term disability and family leave mandates. Its tort system, also among the worst in the nation, costs California businesses $10 billion a year.

It goes out of its way to overregulate, requiring licenses for tree trimmers, cabinetmakers, animal trainers and many other professions that few if any other states license.

Now it wants to turn its regulatory leviathan against its agricultural sector.

At issue is glyphosate, the world’s most commonly used herbicide. Pursuant to Proposition 65 – the state’s Safe Drinking Water and Toxic Enforcement Act – California has decided to place glyphosate on a list of chemicals “known to the state of California to cause cancer.”

That means any product that uses glyphosate must carry a label that warns of the cancer risk. This means any company that wants to sell into the one-seventh of the economy California represents must label all products it believes will be sold in the state. And it better not make a mistake because the state has vowed new rules and stricter enforcement in 2018.

Science is not a democracy – the majority opinion is not always right. But in the case of glyphosate, there is just one study – by the France-based International Agency for Research on Cancer – that showed glyphosate did cause cancer in people. And later reports suggest conclusions were changed in the report after some of the scientists who worked on it said they had not found glyphosate to be responsible for cancer in any people.

The official position of the World Health Organization and the U.S. Environmental Protection Agency is that glyphosate does not cause cancer, and the House Committee on Science, Space, and Technology has a hearing set for this week on how the IARC research could have gone so wrong. At the very least, the state should slow down on this until Congress hears from these witnesses.

State attorneys general also are getting into the act with a lawsuit by 11 of them that challenges the California directive on three counts – that it violates the First Amendment by compelling plaintiffs to make false statements about their products, violates the 14th Amendment because there is no rational state interest advanced and because it violates the Supremacy Clause of the U.S. Constitution by preempting the Federal Food Drug and Cosmetic Act.

In other words, they are suing because California is forcing them to say something they do not believe to be true.

The Los Angeles Times predicted in 1986, when Prop 65 was on the ballot, that it would be a bad idea because it would lead to frivolous labeling. That prediction has held up.

In fact, it’s gotten so bad -- some in the state want to put cancer warnings on coffee now – that companies are calling for a federal labeling law that would supersede the patchwork state laws. More than 50 trade groups, led by 3M Co., General Mills and the Grocery Manufacturers Association, are getting behind a proposal that would regulate labeling at the federal level and require stringent scientific analysis before labels can be required. The coalition’s members join the EPA and others in questioning the science behind the cancer warning on glyphosate.

“The criteria and rationale for these initiatives is not consistent, threatening to leave consumers and retailers even more confused about what is and is not safe,” Claire Parker, spokeswoman for the group that represents the federal labeling law supporters. “Several groups have had discussions to explore the need for federal legislation establishing science-based, uniform, national standards for government-mandated ingredient disclosure and warning label programs.”

Overregulation is starting to catch up with California. The state lost 1.5 million people in the decade of the 2000s. The 2010 census was the first since California joined the union that it did not gain congressional seats. Personal income fell throughout the decade.

Will it sink in that measures such as these are the problem? Or will the federal government have to intervene and become the arbiter of warning labels? History suggests the latter.