For USPS, How About Efficiency Before Exploration?

Brian McNicoll
|
Posted: Jun 20, 2016 12:01 AM
Share   Tweet
The opinions expressed by columnists are their own and do not necessarily represent the views of Townhall.com. 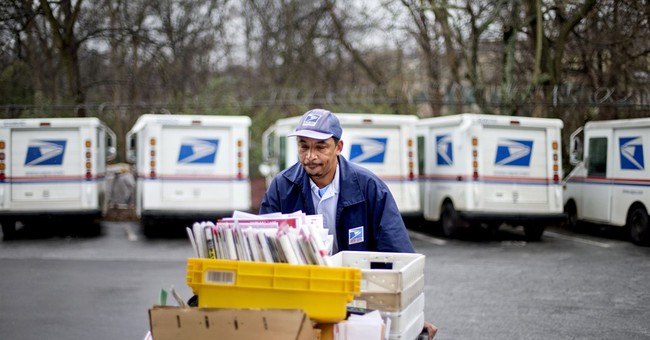 U.S. Postal Service executives are looking into what is known as blockchain technology, and, after a cursory examination conducted with the help of a consultant, they have decided to look further.

Blockchain’s main function is to serve as a way to transfer value … or pay for things. It would support bitcoin, the new super currency that could come in handy with global wire transfers, a substantial side business for the Postal Service.

But it also could be used to block identity theft, verify and sign small contracts and assist with inventory management and other business functions.

A recent inspector general’s report said blockchain could have four uses for the Postal Service:

· It either could create or join in on the formation of a financial platform known as Postcoin. The Postal Service could serve as an intermediary to ensure Postcoin is fair, affordable and transparent, and Postcoin could help the Postal Service with global transfers and other payments.

· Blockchain technology also would help the Postal Service offer verified digital ID, complete with biometric identifier technology. That way users would know with whom they are interacting and could use their verified IDs to log onto secure websites, notarize documents or take part in some contracts.

· It also could be used for device management and to help the Postal Service create an Internet of Postal Things. Blockchain would create multiple forms of access, reducing the risks of hacking associated with single points. It also could strengthen the ability of devices to act upon data, slash infrastructure and management costs and boost efficiency.

· Ultimately, the technology could be used to identify mail pieces the same ways people can be identified, which would speed up shipments, particularly in the international arena. In time, the technology could enable each piece of mail to carry a chip that includes its chain of custody and other important data.

Americans are all for their Postal Service becoming more efficient with less red ink. But it’s hard to trust it to grasp and integrate this technology when so many simpler matters within its control are neglected now.

For instance, according to the most recent mid-year report on the Postal Service by its own inspector general, the Postal Service could be losing hundreds of millions of dollars because of the haphazard way it pays utility bills.

The Postal Service paid $537 million for utilities last year, using two systems – one for the 5,500 largest postal centers and another for the rest. But postal officials did not even review 89 percent of the invoices, despite specific instructions to do so. Also, there was no guidance on how to handle the system for smaller post offices, and Postal Service employees had no clear policies on how to pay utility bills or spot problems.

The Mail Recovery Center, the official lost-and-found department of the Postal Service, received 88 million unclaimed or otherwise orphan items in fiscal 2014. It processed 12 million for possible return to customers and returned 2.5 million. But many more went unreturned, the inspector general found, because the Postal Service did not even track customer inquiries. If you went and asked for something back, in most cases, nobody even wrote down your request.

Moreover, there was little oversight of the contractor who auctions off unclaimed items and that much of what the contractor did receive was mistakenly sent recyclable waste.

In addition, the Inspector General found limited oversight of the fleet credit cards postal trucks use to buy fuel and other expenses. It also discovered the Colorado-Wyoming District spent $8.6 million on overtime and that no one ever looks to see whether the vendors who supply the trays and tubs used for mail transport actually provide as many as they are supposed to.

Moreover, its deal with the Universal Postal Union, which governs rate-setting for international mail, is so unfavorable that the more China – which is exploding as an e-commerce destination – sends letters or packages into the United States, the more money the USPS loses.

This is a familiar story with the Postal Service. Instead of sticking to its knitting and pushing its core, monopoly-protected and most-profitable products – first-class mail and last-mile delivery – it opts for the exotic.

By all means, the Postal Service should familiarize itself with blockchain technology with an eye toward elements that could improve speed and efficiency and lower costs. But first, it should deal with the quite basic problems described in the inspector general’s report – controls over the fleet credit cards, how to pay utility bills, how to operate a lost-and-found and how to keep from getting ripped off on international mail.

It may not be as sexy, but it would improve the bottom line. And any improvement there would be worth celebrating.