Setting the Record Straight: NDAA Section 1615 Opposition Is No Vendetta Against SpaceX

Brian Garst
|
Posted: Nov 09, 2017 11:01 AM
Share   Tweet
The opinions expressed by columnists are their own and do not necessarily represent the views of Townhall.com. 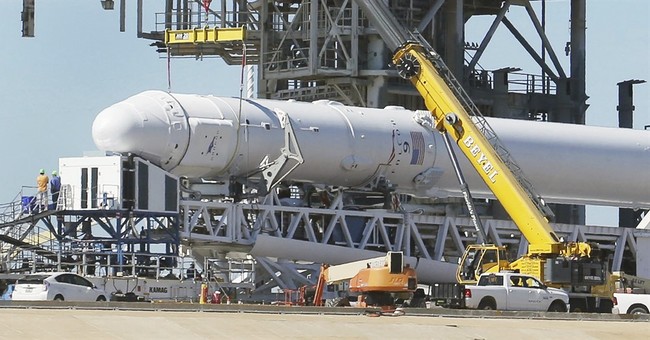 Last week, the senior space editor for Ars Technica suggested my September column questioning a provision slipped into the National Defense Authorization Act, along with others in outlets like the Daily Caller, The Federalist, and the one you’re reading now – Townhall - may be part of a campaign against SpaceX, Elon Musk's aerospace company.

No serious free market advocate would critique SpaceX for opening the once-captive aerospace industry, increasing innovation, or chopping down on launch costs. However, Elon Musk’s companies also have a long history of benefiting from crony capitalism, and that clearly informs why many limited government advocates oppose Section 1615, a provision that will likely benefit Musk's company at the expense of both fiscal and defense policy goals.

Section 1615 will prohibit the U.S. from investing in cost-share partnerships to develop new competitors to Musk's Falcon 9, including ones where funding overwhelmingly comes from the private sector. It will ensure that all existing funds are only put towards specific parts or upgrades to existing launch systems, helping just a couple manufacturers rather than the space industry at large, while undermining key strategic objectives.

The White Houseand Air Forcedo not support this section, and it’s no surprise that outside analysts and commentators concur with their rationale given the following reasons:

Section 1615 will benefit two companies, not the space industry at large. Currently, there are only three major launch systems, and one to two may dissolve in just a few short years. Last year, the Pentagon testified before the Senate Armed Services Committee that the Russian-dependent Atlas V will likely be impossible to salvage through engine replacements. With the congressional retirement of Russian rocket engines set to initiate in 2022 the Falcon 9 and costly Delta IV, which was originally scheduled for phase-out, may soon be the only existing market options. Through Section 1615, Congress would explicitly discourage the entrance of future competition, while the two remaining manufacturers reap the rewards of increased government funding for upgrades and modifications.

Section 1615 will weaken national security and waste hundreds of millions of taxpayer dollars annually. According to the Air Force, the Falcon 9 can only meet approximately 50 percent of National Security Space Missions. Accordingly, the United States' "eyes and ears in space" will be handicapped because it will force the government to utilize the expensive Delta IV for some National Security Space (NSS) missions, taking monetary resources away from other ventures. In a statement, the White House noted that its current approach to launch systems has already saved taxpayers $300 million, and deviating away from its strategy will increase costs by several billions of dollars through FY 2027.

While there is no denying that the entrance of new market participants like SpaceX has significantly helped the domestic space industry, the nation must continue to promote competition and not simply hand Musk the keys to the kingdom. Potentially limiting the field of options to just one or two launch systems – one that is expensive, and one that cannot field 50 percent of important NSS missions -- would either jeopardize our security or burn more holes through the pockets of taxpayers.

In an era marked by an increasingly urgent fight for strategic space domination, as well as excessive debt – arguably the greatest threat to our national security – policymakers need to remain vigilant against the threat of seeing defense policy hijacked by crony handouts.

These are the reasons that many commentators want the conferees on the Armed Services Conference Committee – Sens. John McCain (R-Ariz.), James Inhofe (R-Okla.), and Roger Wicker (R-Miss.), as well as House members like Reps. Mac Thornberry (R-Texas), Lamar Smith (R-Texas), and Mike Coffman (R-Col.) – to closely study Section 1615; not to punish one company, but rather to do what is in the best interests of the country at large. I am cautiously optimistic that they will be up to the task.