Brian Darling
|
Posted: Oct 23, 2019 3:27 PM
Share   Tweet
The opinions expressed by columnists are their own and do not necessarily represent the views of Townhall.com. 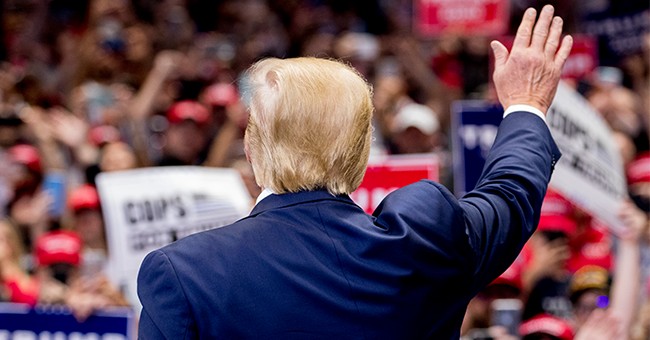 Conservatives in Congress need to step up and preserve the separation of powers as envisioned by our Founding Fathers. House Democrats are using the impeachment provisions in the Constitution to wrestle power from the president and undo the 2016 election, but there are ways for Senate Republicans and the president to fight back. Shutting down the federal government until this impeachment controversy has passed would be a good start and Senate Republicans have the power to do so next month.

The House continues with a secretive hearing process where the Democrats leak only seemingly damaging, out-of-context fragments of closed-door testimony to their allies in the press. They claim this process is like a Grand Jury where they are interviewing witnesses to gather information on impeachment, but this looks more like a secret Soviet-style show trial where Democrats only let the public see information they spin to damage the president while making it impossible to defend himself.

The House impeachment hearings going on today are unfair to the president and should end.

Impeachment is supposed to be a quasi-judicial exercise as evidenced by the fact that the Chief Justice of the Supreme Court presides in the Senate if the House sends over Articles of Impeachment, yet the House is treating it like partisan legislation. The president has been provided zero due process and no right to confront witnesses, what they’re saying, or even to know who some of them are.

So, in the face of all this, what should Senate conservatives do? Simple: the Senate should defund impeachment.

The president already seems to be on board. NBC News reported on October 23, 2019 that “With funding for federal operations set to expire Nov. 21, the political class here is beginning to plan for the possibility — or the likelihood, in the eyes of some — that President Donald Trump will shut down the government to try to turn public opinion against House Democrats and their push to impeach him.”

The president has tweeted that he wants Republicans to fight Democrats harder, Senate Republicans have a chance to force exactly that by conducting a strategic political fight, killing the current bill to fund the government in November.

The current Continuing Resolution (CR) that funds government expires on November 21st.  After the House passes that resolution, expected sometime in the middle of November, the Senate could filibuster the motion to proceed to debate on the bill because the CR funds impeachment.  They should make the vote on a continuing resolution a referendum on impeachment in the Senate, making Senate Democrats choose to either stop wasting taxpayer dollars on this political show trial or defend the attempted removal of a duly elected president of the United States in secret.

If all Senate Republicans stick together and filibuster the motion to take up a bill that funds impeachment, it will not pass. While they are filibustering, they can use this opportunity to conduct a debate the American people want – how to cut down the size of the federal government and tackle the $23 trillion national debt.

I am in agreement with Ari Fleischer, former White House Press Secretary, who argued in a Fox News op-ed, that the response to Trump’s call with the Ukrainian president was “hysterical, hyperbolic, hypocritical.”  At most, the president deserves the functional equivalent of a “five-yard penalty flag,” when the Democrats are using the constitutional equivalent of nuclear attack as their 2020 election strategy. It has to be stopped.

The best remedy Senate Republicans can impose on House Democrats pushing a closed-door partisan impeachment process is to shut down government until they stop, or at least get as many of their colleagues on the record about where they stand on this abuse of power. It’s a gut-check moment for Senate conservatives and Democrats, or at least should be.