Rand Paul Is Right on the Budget (and Tax Reform)

Brian Darling
|
Posted: Oct 18, 2017 1:36 PM
Share   Tweet
The opinions expressed by columnists are their own and do not necessarily represent the views of Townhall.com. 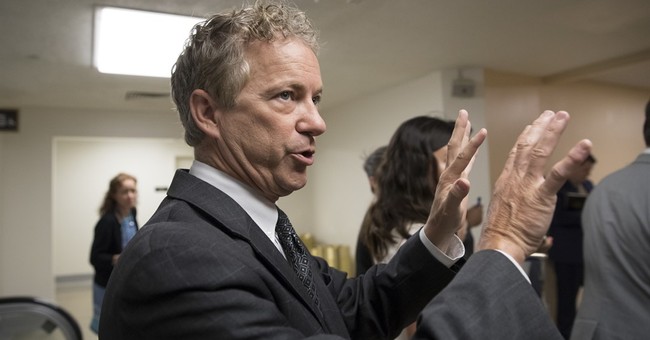 Congress is a mess and the current leadership is to blame.

The first 100 days of Trump’s presidency were a lost opportunity to pass the signature items of the Trump agenda.

On the first day of the Trump Congress, the House should have passed a full repeal of every word of Obamacare and sent it to the Senate.  Democrats would have filibustered, but that debate would have set the table for a budget and reconciliation fight that would have been on better terms.  Leadership should have tried to use reconciliation to repeal, not replace, as much of Obamacare as they could.  They failed to even try that strategy.  The strategy the leadership used proved to be an epic embarrassment for the whole Republican party.

Trump promised on the campaign trail a transportation bill to rebuild the roads and bridges in the United States.  As a fiscal conservative, I assume that bill would have been tough for me to stomach, yet it makes no sense that the leadership in the House and Senate didn’t use the time they wasted on a failed Obamacare repeal to run through a transportation bill.  That bill would have sailed through the House and Senate. Another failure of the leadership.

And guess who the leadership is going to want to blame for them failing to craft a budget that sets the table for tax reform: Senator Rand Paul (R-KY) – my former boss.

As usual, the leadership has set up something conservatives call “Failure Theater” where they bungle a strategy then find somebody else to blame for their own lack of leadership.Conservatives including members of the House Freedom Caucus and conservatives in the Senate like Sens. Paul and Mike Lee (R-UT) are usually targeted as the bad guys when we all know that the real bad members of the Congress are the squishy ones.  Moderate Republicans are the problem and that is why Steve Bannon has targeted the RINO Caucus in the Senate for defeat in primaries.

One of the bigger problems with tax reform is that the marketing of this effort has already squandered the high road.  During the fight against Obamacare, the fight morphed from “Repeal of Obamacare – Root and Branch” to “Repeal and Replace of Obamacare.”  Now the fight to cut taxes as a means to spur economic growth has morphed into “tax reform.”  Voters are not going to be happy if they were promised a massive $11 trillion tax cut over the next 10 years, yet when they file taxes in the next few years they figure out that they are paying more.

Senator Paul has pushed for a tax cut for all Americans, yet the inclination of establishment members is to find “pay fors,” also known as targeted tax hikes, to make the Congressional Budget Office (CBO) and Joint Committee on Taxation (JCT) scores look better.They worry that tax cuts will blow up the debt, yet they refuse to cut spending as a means to “pay for” tax cuts.

We all know that the money we earn is ours, not the federal government’s, yet somehow the government scores a tax cut as lost revenue.  Even an untrained economist understands that if taxes are lower, then the private sector can expand, while the government sector should contract.  We are now in a situation where the budget being considered by the Senate this week promotes bloated spending while trying to cut taxes in the aggregate.

The way that the tax writing committees will make up the difference in lost government revenue will be to close so called “loopholes” in the tax code that will hike taxes on many Americans.  That is not what the voters signed up for when they voted for Donald Trump who promised a Reagan-like massive tax cut for all Americans.

When the leadership tries to pressure conservatives in the House and Senate to support a boated spending bill this fall, while trying to pass a tax bill, expect big government Republicans to push harder to prevent cuts to federal spending and to make up the difference on the back of middle-class tax payers.

The effort to pass tax reform right now is doomed to fail if Congressional Establishment Republicans don’t change strategy – and fast.  Senator Rand Paul is right to oppose the current Senate Budget and, even if it does pass, expect the final product of tax reform to be another epic failure.