Brian Birdnow
|
Posted: Feb 24, 2016 12:01 AM
Share   Tweet
The opinions expressed by columnists are their own and do not necessarily represent the views of Townhall.com. 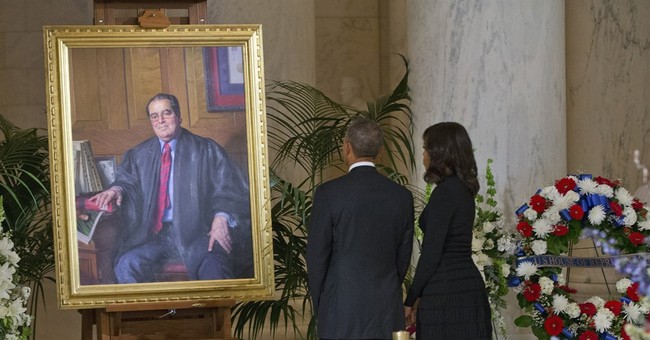 Last week, on February 13th precisely, Justice Antonin Scalia passed away at the age of 79, as was widely noted in the American and the international media. The fallout has been predictable and highly charged with many conservatives notably down-at-the-mouth, and many liberals struggling to contain their glee. The sudden nature of the Judge’s passing and his undeniable position as the conservative champion on the US Supreme Court guaranteed that this would become a most contentious vacancy. Most of the mainstream media commentary concerning the upcoming battle stuck largely to the facts of a liberal President likely nominating an equally liberal jurist to replace a conservative giant, and the inherent difficulties in such a course of action. Some of the organs of the mainstream media, however, have been quite hostile in their assessment of Scalia, and in an unseemly fashion, they are nearly thanking their lucky stars that he has passed, and that President Obama might have the chance, through nominating a successor, to sandbag the last remaining obstacle to his scheme to “fundamentally transform” America during the few remaining months of his Presidency. The St. Louis Post-Dispatch, one of the troubled bastions of the formerly great metropolitan daily newspapers, launched a petulant and pointed critique of Scalia on Monday, February 15th, a mere forty-eight hours after the man’s death. The attack devolved into a scourging of conservatism, and, in truth, it said more about the overheated nature of Scalia’s critics than it did about the man himself.

The lead editorial in the February 15th edition of the Post-Dispatch, entitled “After Scalia” began with an attempt at restraint. The editorial said, “Scalia’s death should neither be cause for rejoicing among liberals nor undue angst among conservatives…” This hopeful beginning quickly dropped off into a bitter attack on Scalia. The newspaper noted Scalia’s brilliance. “Scalia was unquestionably a gifted constitutional scholar.” They noted his tendency to get to the heart of any legal matter. “He was acerbic and outspoken.” The editors said that his personal style was “…grating, but tolerable.” The editors, however, gave away the game when they chided him for allowing his biting dissents to turn into personal attacks on his colleagues, and in a moment of rare candor the Post-Dispatch stated, for the record, “Our problem was with his predictable politics.”

Here was a clear admission from a liberal newspaper that they despised a Supreme Court Justice because of his conservative viewpoint. The author developed this line of attack further in the next paragraph. “Scalia could always be relied upon to disregard even the most persuasive and logical arguments if he thought the outcome would strengthen the liberal side.” The newspaper folks give no specific examples of these supposed transgressions. They simply comment, “His (Scalia’s) conservative bent suggested that he was not weighing the merits of the argument before the court, but rather whether his vote would advance or detract from his personal conservative causes,” and piously add, “That should never be the judiciary’s role…”

The Post-Dispatch writer at this point forgets or conveniently omits the fact that the newspaper celebrated Justices William Brennan and Thurgood Marshall a generation ago for their creative constitutional shenanigans , stating that these men’s legalistic inventions helped to pull America into the twentieth century, by which they mean in a leftward direction. The newspaper also forgets that the narrow split decisions on Obamacare, and gay marriage also came down, with the exception of Chief Justice Roberts, along the familiar liberal-conservative fault lines. The editors, however, do not accuse Justices Breyer, Ginsburg, Kagan or Sotomayor as being simple shills for liberal social policy masquerading as jurists. No, this would be harsh, divisive, and mean-spirited, and we all know that liberals are none of these things!

Two-thirds of the way through the editorial the Post-Dispatch editors allow their collective liberal slip to show. They argue that the President should nominate a prospective replacement, and that he should model his choice after Justice Anthony Kennedy, who they characterize as Scalia’s “conservative colleague”. The PD editors argue that a Justice of the Kennedy model would be a perfect choice because such a person could not be criticized as a liberal, but would not be too conservative, either. They note, admiringly, Kennedy’s tendency to side with the left in many contentious cases, “…as he did in last year’s landmark ruling on same sex marriage.” The author also suggests it would be great fun to nominate a squishy centrist, just for the entertainment value of listening to “…angry criticism from conservatives who want Scalia’s hard-line conservatism to continue.”

The liberals at the St. Louis Post-Dispatch never disappoint. They hate conservatives and conservatism and their vitriol and contempt always get the better of their judgment. Two days after the editorial in question the newspaper ran an editorial cartoon which showed the late Justice Scalia being mocked by St. Peter at the gates of heaven. The late jurist had not yet been buried but the PD had already begun the vilification campaign. They now claim to know who will go to heaven and have decided that all conservatives will go in the other direction. Is this an example of the good old fashioned “liberal tolerance” we are always told exists?