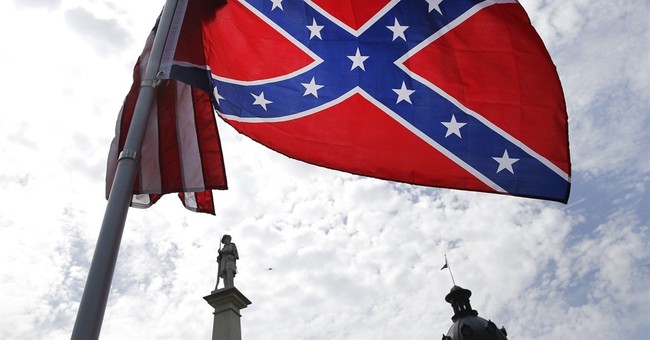 The line that serves as the title of this column is taken from a popular poem written at the end of the American Civil War in mid-1865. This sentiment, intended to be taken metaphorically, has become reality today, as the movement to ban the display and honoring of the Confederate Battle Standard has taken on a new life and strength since the dreadful events of June 17. We are, however, seeing this movement now turning up the heat a notch as those who oppose the display of the Confederate flag have gone on a full offensive and hope to ban the emblem not only on official property, but want to erase the standard from all of American life, forever, under the rationale that the Confederate flag is a symbol of hatred and racism. This battle is now joined and we will undoubtedly see many more skirmishes fought on this front in the near future. It begs the question to ask whether the Stars and Bars flag is really a symbol of racism and hatred and, thus, truly offensive. The American Left has said it is, and that spells the end of the argument. In fact, this struggle is not really about the Confederate battle standard, it is another example of the liberals choosing a target, destroying the said target, and squelching all opposition to their campaign of vilification. All modern American political struggles are simply variations on this general theme.

In order to understand the current controversy we must briefly recap the facts of the matter. On June 17, Dylann Roof, a white South Carolinian, committed the crime of mass murder in the city of Charleston. Mr. Roof, who certainly displays many signs of mental illness, had, in the past, posed for photographs with the Confederate flag, and he called himself a White Supremacist. Governor Nikki Haley, acutely aware of the criticism building around the country announced, on June 22 that she would support a vote in the state legislature calling for the removal of a southern battle flag from the South Carolina state capitol grounds. After some largely halfhearted debate on the measure, it was passed by the legislature, and the flag was removed on Friday of last week.

This act, suggested by a Republican governor and approved by heavy bipartisan majorities, could have been presented as a measure of reconciliation, but instead, it has become an excuse for a politically correct witch hunt, and an opportunity for the left to exploit a genuine tragedy for crass political purposes. The liberals, following the Saul Alinsky-Rahm Emanuel dictum to never allow a good crisis to go to waste, are now pushing to get what they have spent years covertly working toward. The fact that they are using a disturbed young man who committed mass murder and waved a Confederate flag with no official sanction as a means to their end does not bother them one bit.

The flag skirmish has led to a new general offensive aimed at all things Confederate. We have now seen the beginnings of the predictable campaigns to change the names of public parks and streets named for southern war heroes. It has not taken long for disingenuous politicians to get into the act. Missouri Democratic Congressman William L. Clay has proposed a ban on the Confederate flag in official VA cemeteries. Memphis Mayor AC Wharton has proposed to disinter the bodies of Confederate General Nathan Bedford Forest, and his wife and to remove them from a city park. In St. Louis, Mayor Francis Slay ordered the covering of a Confederate veteran’s memorial statue in the nationally known Forest Park, while he “studies” the question. We are also hearing the renewed calls for college and high school sports teams to change their names from “rebels”. Watch out Ole Miss! Finally, passing from the sublime to the ridiculous, a New York Times scribe suggested that the nation should ban public showings of “Gone with The Wind” because it glorifies slavery and racism.

Some of those campaigning for their favorite anti-Confederate measures are careful to emphasize that their proposals would only apply to banning displays of flags and memorials on federal and/or state property. In banning the displays on state property the protestors say that they are simply curtailing a tacit governmental endorsement of the Southern cause. Many conservative commentators have agreed with the end of Confederate displays on state property, and have assured thousands of now worried faithful that there will never be a similar offensive launched against private displays of the Stars and Bars. Is that a fact? Does anyone really believe that the flag banning crowd will stop here? The movement to criminalize even the private display of the Confederate flag is coming and sooner than most people realize. Soon there will be no more displaying the flag on bumper stickers or window decals, and the same will apply to jackets and bandanas. The mass market retailers have already fallen into ranks and announced that they will stop selling Confederate-themed items in their stores around the country. The National Park Service has already pulled Confederate souvenirs from Civil War national historic sites.

The main point of this column is that none of this should come as any surprise. The current flag smackdown is merely one more front in the never ending culture war. All of our current discontents are rooted in this very deep soil. A casual look at the newspaper on Friday, July 10th showed this clearly. The effort to ostracize Donald Trump over his unflattering characterization of illegal immigrants illustrates the culture war at its hottest. The renewed battle over the nicknames of professional sports franchises such as the Washington Redskins, Atlanta Braves, Kansas City Chiefs, and Chicago Blackhawks also illustrates this maxim. A look at the St. Louis Post-Dispatch last week showed that the Left, far from being content in their SCOTUS victory on gay marriage is now demanding that gay husband-and- wife partnerships be given a special legal designation, and they are also warning the readers of the dangers of allowing organized religion to thwart the march of progress by claiming a theological exemption from the new rules on gay marriage. What was the PD rationale on this one? Yes, you guessed it: The newspaper said that in the past religion had been used to justify slavery and racism!

The main point of this column is not to bash the mainstream daily papers, although that is great fun; it is, as stated above, to illustrate the nature of the political Left to frame all of life in a manner that allows them to achieve their goals, by any means possible, and at any cost. They begin by demonizing the opposition. The liberal mind cannot conceive of a situation wherein honorable people disagree. Instead they heap opprobrium on the opposition, ridiculing them and hoping to marginalize these voices. After ruining some opponents and silencing the rest, the Left goes on to the next target and the next smear campaign.