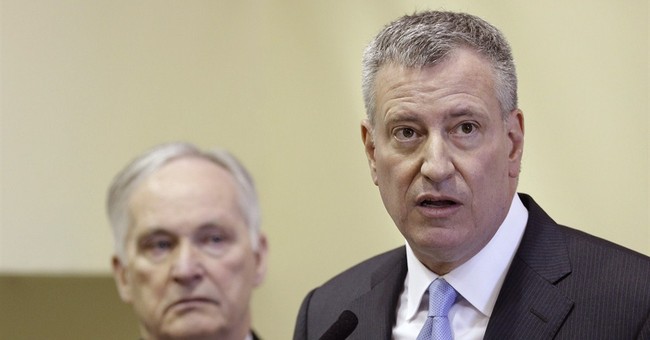 Last week (March 21st) the New York Times ran a puff piece on New York City leader, Mayor Bill De Blasio, “reaching out” to faith based organizations and marveled that an avowed secularist has built strong alliances with certain religious groups. The Times opined, “…as the leader of a famously secular city, Mr. De Blasio has been emerging as something unexpected: a champion of religion whose administration has advanced the cause of faith groups in the unlikeliest of public squares.” The story notes that NYC public schools will henceforth close on two Muslim holy days, the city will relax health regulations to allow for a circumcision ritual favored by Orthodox Jews, and that the mayor has developed a genuine friendship with Timothy, Cardinal Dolan, the jovial NYC Archbishop and the titular head of the American Catholic Church. The nation’s paper of record goes on to praise De Blasio as, “…a more inclusive kind of liberal, one who is willing to embrace religious groups rather than treat them as adversaries.”

The last time we were sold a New Democrat who was a more inclusive kind of liberal we got Bill Clinton and company, but never mind the details! A close look at Bill De Balsio’s religiosity reveals a conventional liberal political correctness on the one hand, and on the other hand, a Progressive Era style of equating theology with welfare state liberalism, of the social gospel variety, circa 1899. There is very little new in the De Blasio playbook, notwithstanding the New York Times and their breathless reporting.

In order to make sense of this whole subject we must take a closer look at his honor, the Mayor of New York, Bill De Blasio. The mayor was born Warren Wilhelm, Jr. on May 8, 1961 in Manhattan, the son of Warren Wilhelm and Maria De Blasio Wilhelm. The family moved to Cambridge, Massachusetts and young Warren Wilhelm spent his childhood in the rarefied air of the Harvard-Amherst axis. De Blasio proudly states that he was baptized as a Catholic, but is officially non-sectarian, and he calls himself “spiritual” rather than conventionally religious. His political biography seems to reveal a cunning politician, fashioning himself for political advantage, very similar to another up-and-coming Democrat of an earlier era, namely former U.S. Senator Gary Hart. De Blasio claims that his name change from “Wilhelm” to “De Blasio” developed as a statement of rebellion against an absentee father, and a desire to embrace his Italian heritage. He officially changed his name in 2001, at the age of forty, when his real name became an issue in his NYC city council campaign. It might be churlish to suggest that De Balsio’s electability quotient improved among working class New Yorkers with his new Italian surname. In any event, he campaigned in his subsequent elections as an Italian-American, and a baptized, if lapsed, Catholic.

As to De Balsio’s alliances with religious groups, he was quoted in the Times story as describing “…religious outreach as inseparable from his work to create a more inclusive New York.” This shows that religion, to De Blasio, is simply another forum for advancing his liberal agenda. The story continues on to discuss De Balsio’s hope that religious groups will serve as an engine of social change, and, approvingly cites his career as an organizer (good heavens, another Obama?) with Catholic social justice contingents supporting the Sandinista government in Nicaragua. The piece further notes the mayoral outreach to the Catholic Church, and, as mentioned earlier, the mayor’s chumminess with Cardinal Dolan. It details some of the city efforts to extend pre-kindergarten classes to Orthodox Jewish schools, despite ACLU opposition, and lauded the, “…mayors big-tent approach…when he announced the addition of two Muslim holidays to the city’s public school calendar.” Muslim groups have celebrated this announcement, and their rejoicing has been seconded by politically correct liberal organs, largely in the media. De Balsio’s official spokespeople have simply stated that this “was the right thing to do”, but skeptics have pointed out that De Blasio is pandering to certain religious groups and ignoring others. (He has, for instance, ruled out closing the NYC schools on Hindu and Buddhist holidays) The main line of criticism seems to concern the fact that De Blasio sees religious groups as simple political constituencies to be managed with care and appeased with favors. They, in turn, will deliver the votes for the organization on Election Day. This might be good politics, since it is straight out of the Tammany Hall blueprint for electoral success. It does, however, raise questions as to whether there is anything “new” about De Balsio’s political style.

This electoral high wire act is fraught with peril. Some of the groups that De Blasio is courting will not co-exist with others. At this point the mayor will have to decide where he intends to set up his camp. De Balsio’s legal counselor defended the decision to recognize the Muslim holy days by saying that this was, “…an appropriate recognition of a religious group that is quickly growing in New York.” She admits, in essence, that political considerations drive this calculation. Along these same political calculus lines, De Blasio boycotted the recent St. Patrick’s Day parade, officiated by Cardinal Dolan, himself, since the parade “under-represented” gay groups. When a liberal public official has to choose between standing with the traditional moralists or the gay lobby, it is a certainty where that mayor will line up.

Perhaps it is unsporting to question the mayor’s motives, but De Balsio’s political slip seems to be showing a bit here. The near future should tell us whether this this new religiosity is real or feigned for political advantage. Will the mayor back religious freedom in standing with his new found Catholic allies who want to opt out of Obamacare on faith-based grounds? Will the mayor stand with certain religious denominations and businesses when they resist gay marriage on moral grounds? There is little doubt where Mayor Bill De Blasio will raise his standard in these soon-to-be-fought battles. The liberal mayor, like all of his non-office holding brethren, will come home to dogma, doctrine and Party, even after the occasional walk on the wild side.