From Here to Eternity? Ferguson and the Future 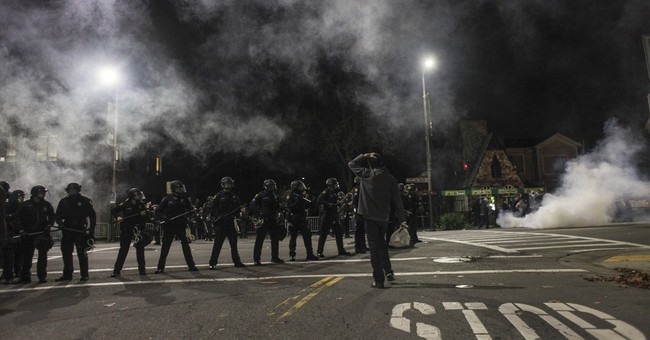 The fires of November are now fading after two weeks, but the story, and the sound and fury surrounding them will not die a quiet death. In fact, the present situation in greater St. Louis is tense, and fraught with peril. The “protestors”, ostensibly those who are demonstrating their frustration with the criminal justice system in the wake of the Grand Jury decision concerning former Ferguson (Missouri) Police Officer Darren Wilson in the Michael Brown shooting incident, are becoming increasingly disruptive and confrontational, all crime has ticked noticeably upward, and the community is more racially polarized than ever before. No one can accurately predict what will happen in the future, but many civic pessimists believe that the current unpleasantness will drop St. Louis into a Detroit-like downward spiral with the loss of population, quality of life, wealth and position. Even the optimists admit that the Gateway City has taken a damaging blow, and that recovery will be a long and slow process.

In order to make sense of the present troubles we must understand the recent past in the Michael Brown case. Since most readers are at least somewhat familiar with the essentials we can move forward to later November in this narrative. In the days before the announcement that a St. Louis County Grand Jury would recommend no charges against Ferguson Police Officer Darren Wilson in the shooting death of Michael Brown on August 9th, two members of the New Black Panther Party, Brandon Orlando Baldwin and Olajuwon Ali Davis, were arrested in St. Louis on firearms and bomb charges. Baldwin, who goes by the name of “Brandon Muhammad” and Davis who calls himself “Ali” were named as plotters who intended to blow up the Gateway Arch, and to murder St. Louis County Prosecuting Attorney Robert McCulloch, and Ferguson Police Chief Tom Jackson. St. Louis city police took these men into custody on Friday, November 21st.

Also in the week before the Grand Jury decision, Missouri Governor Jay Nixon, widely ridiculed for his non-response to the rioting and looting in August, announced a “state of emergency” in St. Louis County, and mobilized the National Guard for action, if needed. Nixon, seeking to redeem his reputation, if not his political future, planned to be in St. Louis for the Grand Jury announcement, well within sight of the television cameras. On Monday, November 24th at approximately 8:20 PM, Central Standard Time the St. Louis County Prosecutor, the aforementioned Robert McCulloch, announced that the Grand Jury investigating the case had determined that Officer Wilson acted within the scope of his duties on the afternoon of August 9th, and that, since no charges were recommended, none would be filed. The metro area had braced for trouble as the “protestors” had been all but promising to resume their activities if their hopes to see Officer Wilson arrested were dashed. The problems began immediately following the announcement. Protestors who had gathered outside the Ferguson City Hall and Municipal Courts Building grew unruly and soon began a full scale riot. The Ferguson and St. Louis County Police withdrew from South Florissant Road, and allowed the rioting and looting to continue. Soon, the disorders spread to West Florissant Avenue, the site of the original police shooting, and the subsequent protests. The resulting events of the dreadful night of November 24-25, 2014 have been well chronicled and need no further illumination here. Suffice to say, your humble TH columnist could see the glow of the Ferguson fires from his backyard, roughly 4.5 miles from the center of the action.

Once order was restored on the afternoon of November 25th, the accountants among us totaled up the damage. Authorities claimed that 25-30 fires had been set, many of which burned freely, because firemen were held back due to safety concerns. These concerns were well founded, as the St. Louis County Police Chief Jon Belmar, stated that officers had totaled over two hundred random shots fired (not by police) during the night. Fifteen stores were looted; two gas stations and an auto showroom and sales lot were burned. Two FBI agents were shot, as was a police officer in an adjacent suburban community. The monetary damages have not yet been assessed, but preliminary accounts suggest numbers well into eight figures.

Governor Jay Nixon’s vaunted “state of emergency” proved to be a pitiful joke. The National Guard units were nowhere to be found on that fateful night of November 24th, and Ferguson Mayor James Knowles formally requested assistance, but never received a response from the governor or his staff. No one knows exactly why Governor Nixon did not deploy the National Guard along West Florissant Avenue, when protestors had guaranteed that they would riot on the same stretch of road where they had rioted on August 9th. Many unconfirmed reports have made the rounds that Nixon was responding to personal lobbying from US Attorney General Eric Holder and from President Obama, who desperately want to avoid presenting an internationally broadcast image of a “militarized “police force in the USA. These reports may or may not be true. If they are true, Governor Nixon abdicated his primary responsibility to the people of Missouri: He failed to maintain public order, and to protect the citizenry. Nixon remains in a virtual state of seclusion, refusing to discuss the issue, and declining interview requests. The Missouri State Legislature should investigate the situation, but, so far, they seem to have shown little interest in the matter.

Since November 24-25th, the fires have burned down, but the tension level remains at DEFCON 5. Protestors disrupted Black Friday shopping, closing down two malls and harassing browsers at a number of Big Box Stores. Others have been disrupting live theatrical performances and concerts given by the St. Louis Symphony Orchestra. Last week more protestors disrupted the Christmas carolers at the Missouri Botanical Garden. Still other protestors are staging “die-ins” on major city thoroughfares, and are breaking the windows of the vehicles that attempt to maneuver around them. Many area High School students, sensing the growing anarchy, are boycotting classes and leaving their campuses. The students cannot explain what they are hoping to accomplish by these actions, and would not argue that they are improving themselves or society by skipping out on their classes. Yet, they are engaging in massive truancy with barely any passing interest.

Area citizens seeking a safe harbor in the world of sports find no refuge or comfort, either. On Sunday, November 30th, St. Louis Rams wide receivers, in pre-game introductions, threw their hands over their heads in the now infamous “Hands Up, Don’t Shoot” position. The ensuing kerfuffle resulted in the St. Louis City and St. Louis County Police protesting the players’ actions to the St. Louis Rams. Kevin Demoff, the Rams Chief Operating Officer, assured the police chiefs that the players intended no disrespect to police officers. The police officials claimed that they found the Rams apology satisfactory, but Mr. Demoff denied that the Rams had apologized at all. So, the beat goes on!

On a more ominous note, FBI statistics have noted a pronounced uptick in crime, of all categories, in the St. Louis area, since the late summer. The perceived breakdown in public order and the fact that police are busy with “demonstrations” has led to a corresponding diminution of routine police patrols and investigations. There is also evidence of racial hatred in a growing number of recent incidents. On the early morning of November 30th, Zemir Begic, a young male and native of St. Louis sizable Bosnian community, was brutally beaten to death with hammers by four male assailants, three of them black, and one Hispanic, for no apparent reason, including robbery. St. Louis authorities, including Mayor Francis Slay and Police Chief Sam Dotson assured the community that the attack had no racial connotations, but many Bosnians in their south St. Louis neighborhoods do not agree. A further assault and robbery of a young Bosnian woman on December 6th has been classified a racially inspired hate crime, and is being investigated as such.

So, we can see that life in America’s twentieth largest metropolitan area is far from “back to normal”, nor is it likely to change anytime soon. What is really unclear is where we go from here. While Ferguson smolders, New York and Cleveland heat up, and South Carolina simmers. President Obama issues sonorous and largely meaningless pronouncements on race, class and society from the insularity of the White House bubble. The President has dodged urgings from certain quarters that he should personally go to Ferguson. His staff people have argued, reasonably, that time is short and that he has other commitments. Behind this reluctance, however, is the obvious disinclination to involve himself in a local situation, particularly one in which tempers are sure to flare again. Many of Obama’s counselors see no advantage accruing to the President in a Ferguson visit, so we are unlikely to see one.

The future of the St. Louis area, at large, is also unclear. The local power structure and the assorted Babbitt-type boosters in the aptly named Chamber of Commerce group known as “Civic Progress” dread the nightly reports of rioting and destruction. A number of previously scheduled conventions have already cancelled, due to the prospect of continuing unrest. The city lost out on a bid to host the NCAA Final Four basketball championships in 2018, and many of the Civic Progress folks, speaking off the record, claim that the Ferguson troubles doomed an otherwise very strong bid.

No one can peer into their crystal ball and tell what the future holds for certain. In police and criminal justice circles might there be a new policy, wherein only black police officers are permitted to shoot black suspects? Would this policy extend to white police officers and suspects, as well? This is obviously very unlikely, and no reasonable person, no matter how well-intentioned would argue for a de facto re-imposition of segregation in law enforcement. There are no easy answers, but we can be sure that interesting times are ahead of us, in the New Year, and beyond.

Merry Christmas to all Townhall Readers!

Total Disgrace: We Know Why Pelosi and Schumer Are Dragging Their Feet on a COVID Relief Bill
Matt Vespa