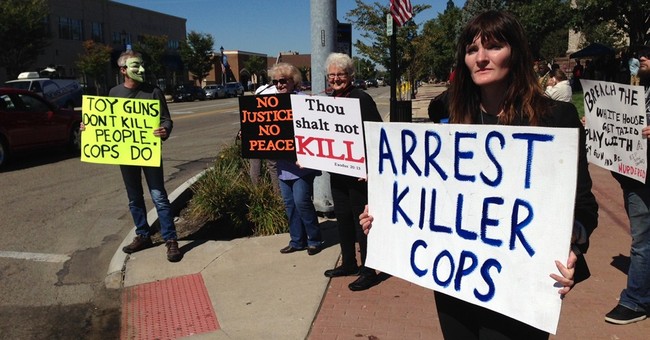 Nearly one and one-half months after the serious disorders, often described as riots, in the working class community of Ferguson, Missouri the plot has thickened in that community and nearby areas. This past week Officer Darren Wilson, the Ferguson patrolman in the eye of the storm, voluntarily testified to the St. Louis County grand jury investigating Wilson’s August 9th shooting of Michael Brown. Wilson, who was not obligated to appear, has also spoken with St. Louis County investigators twice and with the FBI once. While official spokespeople have refused to comment on the case, newspaper and television sources described Wilson as “cooperating fully” in the proceedings.

The community organizers and the professional protestor class have been busy as well. The St. Louis County police, with the assistance of their counterparts in the city and the State Highway Patrol foiled an effort by protestors to shut down Interstate 70 on September 10th. Speakers for various groups, however, have threatened to disrupt the St. Louis Rams and the baseball Cardinals in the near future. They have also threatened to close popular shopping venues, plan to disrupt community autumn/Oktoberfest celebrations, and have promised to mount massive demonstrations during the Major League baseball playoffs and World Series, if the Cardinals host these events. Finally, various groups have intimated that future violence is coming if Officer Wilson is not charged with murder. The St. Louis Post-Dispatch quoted one protestor as saying “If Darren Wilson gets off you all better bring every army you all have got. Because it’s all going down.”

The political spillover of the debacle has also intensified. A large and apparently organized group of hecklers demonstrated during a St. Louis County Council meeting last week, saving most of their fury for County Councilman Steve Stenger, a Democrat, and the presumptive favorite in the election for St. Louis County Executive in the November elections. Stenger, a friend and political ally of St. Louis County Prosecuting Attorney Robert McCulloch, found himself verbally assailed by protestors who addressed him as “boy”, and shouted him down when he attempted to speak. Hazel Erby, the County Council Chairwoman, threatened twice to end the meeting if the demonstrators did not cease their general disruptions, but she did not succeed in bringing order out of chaos. Speakers from the audience labeled Officer Wilson a “war criminal”. They compared the St. Louis County Council to the Ku Klux Klan, and noted that Missouri had been a slave state before 1865. One speaker, less historically minded, told council members that, “You are ISIS to Ferguson”. The audience also loudly jeered a woman who voiced support for local law enforcement officers. She was given a police escort from the building after the conclusion of the meeting.

On the more strictly political side of things a newly organized coalition of St. Louis area black Democrats announced on Wednesday (Sept. 17th) that they would no longer support candidates who had exhibited “Disrespect” toward the black community on a number of issues. This group was organized by a number of suburban mayors, state representatives and senators, and is chaired by the previously mentioned St. Louis County Council Chairwoman Hazel Erby. Ms. Erby issued a statement saying, “We are not going to support candidates just because they have an insignia of a donkey behind their name.” The current target of the new coalition’s discontent is, as was mentioned before, current County Councilman Steve Stenger. The protest faction has nominally centered on Stenger due to his close political alliance with County Prosecutor Bob McCulloch. There are, however, other factors at work, in this complex equation. Black Democrats in the area resent Stenger for the fact that he ran against, and defeated, the incumbent St. Louis County Executive, Charlie Dooley in the Democratic primary election last August 5th, less than a week before the Ferguson disorders began. Charlie Dooley, the first black St. Louis County Executive, has held the office since 2003, and has presided over an administration increasingly seen as incompetent, plagued by cronyism, and quite likely covering up considerable corruption. The county government has been investigated by the FBI no less than four times since 2008 for embezzlement, sweetheart deals to political favorites in county contracting, and malfeasance and misappropriation of funds concerning the county health department. Steve Stenger ran against Dooley’s record and won an overwhelming victory. He largely eschewed personal attacks, even when the contest grew heated. Still, the vote did break down strongly along racial lines and many of the Democrats who have joined the new coalition blame Stenger for the defeat of the first black St. Louis County Executive. It would be a stretch to say that their opposition to Stenger is simple payback for the recent primary election, but the election certainly plays a role in the coalition’s disdain for a fellow party member.

How have all of these political and protest shenanigans worked themselves out in the court of public opinion? That is a difficult gauge to actually read. Some institutions and organizations have responded sternly and others have been more openly sympathetic. Still other institutions have hoped that the issue will simply go away, and the members of these groups are trying to avoid damage. The law enforcement community, as was mentioned earlier, took proactive measures to thwart the planned shutdown of I-70 last week. The chief of the SLPD publicly warned protestors that they would be arrested if they tied up traffic or otherwise disrupted ordinary pedestrian and motorist activity in and around downtown St. Louis this past weekend.

The St. Louis area business community has responded in a relatively sympathetic manner. Over three dozen companies and organizations have pledged nearly $250,000 toward the Reinvest North County Fund, which is dedicated to helping businesses damaged in the unrest to rebuild. Express Scripts and Centene Corporations, which have extensive properties in the area near Ferguson have announced plans to expand, although their spokespeople have declined comment on whether the recent disorders influenced corporate decision making. The Emerson Electric Corporation, a Fortune 250 company with $25 billion in annual revenue, employs 1,300 people at a site in Ferguson, directly across the street from the temporary police command post during the weeks of tension. Emerson, through its “Ferguson Forward” initiative will contribute $1 million a year to foster youth employment, college scholarships to area students, and to expanding the size of their Ferguson manufacturing facility. David Farr, the Emerson CEO, publicly stated that Ferguson had been the company home for over seventy years, and said that the corporate commitment had grown stronger during the recent troubles. The response of the corporate community has been quite heartening, and it does reflect the general civic minded nature of the St. Louis bourgeoisie, as has been noted by T.S. Eliot, Henry Louis Mencken, and Eleanor Roosevelt, among others. Still, many in the St. Louis business community do remember with suspicion the late 1980s when the Reverend Jesse Jackson organized a boycott of Anheuser-Busch Incorporated, arguing that they were lagging in black employment and marketing. The boycott mysteriously ended when the Busch family awarded a lucrative beer distributorship to the Reverend Jackson’s son. This shakedown operation was strongly criticized by media including the two major black newspapers in St. Louis, but many corporations remember this with open chagrin.

The faction that is ducking for cover and hoping that this will all go away is, of course, the politicians. As was mentioned in these pages a number of weeks ago, Missouri’s Democratic governor, Jay Nixon, has seen his hopes to be elected the U.S. Senator from Missouri vanish over the horizon like a Flying Dutchman. In the St. Louis area U.S. Senator Claire McKaskill has been trying to engineer favorable publicity for herself, while her Republican counterpart, U.S. Senator Roy Blunt, a native of Springfield, Missouri has kept mum on the incident and the issue. Steve Stenger, who certainly assumed on August 5th that his election as St. Louis County Executive was a sure thing, is now in a real race, although he will probably still win. St. Louis Mayor Francis Slay, who marched with the protestors, believes that he is the St. Louis mayor for life. Slay has been the Mound City mayor since 2001, he routinely ignores the state constitution, and he brags about this to his favored constituencies. Marching with the protestors is the type of empty symbolism that the citizens of the metro area have grown to expect from Francis Slay, but he keeps winning.

Finally, we address the question on everybody’s lips. How has this racially polarized debacle affected the St. Louis area? There can be no doubt that perceptions, thoughts, and attitudes on the affair have broken down along racial lines. Most St.

Louisans, regardless of color, have stated that Darren Wilson should be punished if wrongdoing is proved, but most white area residents do no yet believe that he has been proved guilty of wrongdoing. The general feeling of the white population is that the investigation should proceed, and the chips should fall where they may. Much of the more vocal segment of the black population see the situation differently, and are demanding that Officer Wilson be hauled up on murder charges. While most St. Louisans, of all races, are going about their daily lives and interacting with each other in the normal fashion this cloud hanging over the area is not likely to disperse without some sort of downpour.