Brian and Garrett Fahy
|
Posted: Jan 21, 2017 12:01 AM
Share   Tweet
The opinions expressed by columnists are their own and do not necessarily represent the views of Townhall.com. 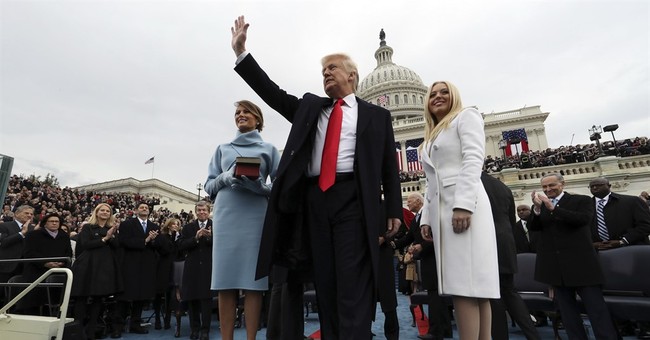 It was not a speech for the history books or speech classes, but it was classic Trump and a welcome departure from recent history. On Friday, January 20, 2017, Donald J. Trump, the 45th President of the United States, gave his inaugural address.  While the tone, content and delivery were quintessential Trump, businesslike and tinged with a hint of aggression, the speech was a refreshing departure from the inaugural addresses of Barack Obama.  It was “America First” instead of “Me First,” a speech instead of a lecture, a call to action instead of a call to repentance.

Mr. Trump’s first gift to the nation was brevity.  Obama’s first inaugural address was 2,395 words; Trump’s was only 1,433 words, around 20 minutes long. It was the speech of a business man, not a philosopher president; a speech that confirms that speaking is not working and that for Trump, unlike Obama, words are not accomplishments.

Second, the speech was refreshingly and appropriately not about Trump.  The word “my” appeared only once, and in this context, “I will fight for you with every breath in my body and I will never ever let you down.”  Unlike Obama, Trump is not the one we have been waiting for.

Third, the speech was filled with Reaganesque promises to return power to the people:

“…we are transferring power from Washington, D.C. and giving it back to you, the people.”

“January 20th, 2017 will be remembered as the day the people became the rulers of this nation again.”

If Trump throws out Obama’s executive orders, repeals Obamacare, reforms Dodd Frank, and wholeheartedly rejects the Obama approach to legislating via executive orders, he will have made good on this rhetoric. If not, it will just have been words, like Obama.

Fourth, in contrast to Obama, who saw his task as rectifying America’s past sins, Trump dwelt, as he had during the campaign, on ending an era where America gets the short end of the stick, economically and militarily.   He said:

“For many decades, we've enriched foreign industry at the expense of American industry; subsidized the armies of other countries, while allowing for the very sad depletion of our military. We've defended other nations' borders while refusing to defend our own.

And spent trillions and trillions of dollars overseas while America's infrastructure has fallen into disrepair and decay. We've made other countries rich, while the wealth, strength and confidence of our country has dissipated over the horizon.

One by one, the factories shuttered and left our shores, with not even a thought about the millions and millions of American workers that were left behind. The wealth of our middle class has been ripped from their homes and then redistributed all across the world.”

Whether or not you accept the truth of Trump’s rhetoric – the usefulness of NATO and the effects of free trade (NAFTA) speak for themselves – you can’t say Trump wasn’t consistent.  The Trump campaign has now become the Trump administration.

Fifth, unlike Obama, who vowed to slow the rise of the oceans and make America “respected again,” Trump took aim at more concrete and pressing problems.  To wit:

“…mothers and children trapped in poverty in our inner cities; rusted out factories scattered like tombstones across the landscape of our nation; an education system flush with cash, but which leaves our young and beautiful students deprived of all knowledge; and the crime and the gangs and the drugs that have stolen too many lives and robbed our country of so much unrealized potential. This American carnage stops right here and stops right now.”

This had to have been the first inaugural address to use the phrase “American carnage,” extreme rhetoric to be sure, but again, it was Trump as Trump, not a more enlightened version of himself, a signal that he is not changing, for better or worse.

Finally, Trump invoked God, which was both surprising given Trump’s generally irreligious background, and yet entirely within American historical norms.   Trump quoted Psalm 133, “how good and pleasing when God’s people live together in unity,” and spoke these lines:

“Most importantly, we will be protected by God.”

“And whether a child is born in the urban sprawl of Detroit or the wind-swept plains of Nebraska, they look up at the same night sky, they fill their heart with the same dreams, and they are infused with the breath of life by the same almighty Creator.”

These welcome lines are sure to please those evangelicals and other religious Americans who backed Trump.  And the references bookend Trump’s convention speech last summer:

“At this moment, I would like to thank the evangelical and religious community because I’ll tell you what, the support they’ve given me, and I’m not sure I totally deserve it, has been so awesome and has had such a big reason for me being here tonight. True, so true.”

If Trump’s inauguration has taught us anything, it’s that Trump isn’t changing one bit (he’s even Tweeting!), which is sure to delight his fans, infuriate his opponents, and ensure he remains the center of attention.  But if he makes good on his campaign promises to undo the Obama legacy beginning on Monday, January 20th, his inauguration will be looked back upon as the starting point of the Trump revolution.