Brent Bozell and Tim Graham
|
Posted: Nov 03, 2017 12:01 AM
Share   Tweet
The opinions expressed by columnists are their own and do not necessarily represent the views of Townhall.com. 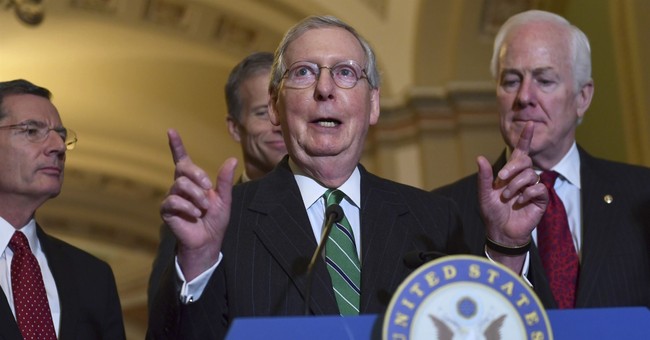 A Morning Consult poll released on Halloween offers a scary result for establishment Republicans. They tested the approval and disapproval ratings of current members of the U.S. Senate. Guess who was in the cellar. Senate Majority Leader Mitch McConnell ranked dead last.

Now take a look at who has the highest approval. Sen. Bernie Sanders came in first, with 71 percent approval. Right behind him, with 67 percent, was his fellow leftist from Vermont, Patrick Leahy.

What lesson can we take from this particular survey? It starts with the media elites. When the media love a leftist, that only helps them with their base. "The friend of my friend is my friend," as it were. It also endears them to independents, since the media portray leftists as feisty populists for the common man, not as the over-regulating, super-taxing socialists they are.

On the other hand, when the media love a Republican, that causes great problems with the Republican's conservative base. It's "The friend of my enemy is my enemy." It's one obvious reason why McCain, despite (or, more accurately, because of) media valentines, couldn't defeat President George W. Bush in the 2000 primaries.

Trump voters cannot stand McCain's personal crusade against Trump. The media desperately want Republicans to attack Trump as viciously as they do, but getting on the wrong side of Trump is a perilous place to be.

Sen. Flake's speech on the Senate floor announcing the inevitable -- that running for re-election would be fruitless -- made him the toast of MSNBC. Joe Scarborough gushed, "This was our 'Mr. Smith Goes to Washington,' where you had a senator saying on the floor that the president of the United States in his party was a threat to constitutional norms, societal norms and our children." Predictably, Chris Matthews also dragged out the Jimmy Stewart movie reference, comparing Flake's speech to "a moment straight from a great novel or movie."

When a Republican is the toast of MSNBC, he's toast with conservatives.

Let's stipulate that McConnell isn't a media darling like the two Arizonans. It's easy to recall how the journalists who want Trump impeached/indicted had a conniption when McConnell said out loud in 2010 that his first goal was to deny Obama re-election. They reacted like he'd slapped the pope in the face while kicking Santa Claus in the groin. But to both right and left, McConnell represents Entrenched Washington, and right now, he embodies the disgust conservatives feel for having many of their policy aims sidelined and/or squashed.

Not every senator fits the formula. The fourth least popular senator is Robert Menendez, D-N.J., who's now on trial for felony corruption charges. Of note: His rotten approval rating cannot be connected to national media coverage, since he is a Democrat. Forget accusations against Trump, or indictments against former Trump campaign chairman Paul Manafort. We are talking about a trial in which the defense has now rested. And the evening-news coverage on ABC, CBS and NBC? Zero.

Corruption, in the eyes of our partisan media, is solely a Trump problem, just like colluding with Russia to manipulate the election, or hating facts you find inconvenient. When Republicans agreeably proclaim that only Trump is ruining Washington on all of these things, they are trapped in the liberal-media mind meld.