Snoozing at Teachers Who Abuse Children

Brent Bozell and Tim Graham
|
Posted: Jan 20, 2017 12:01 AM
Share   Tweet
The opinions expressed by columnists are their own and do not necessarily represent the views of Townhall.com. 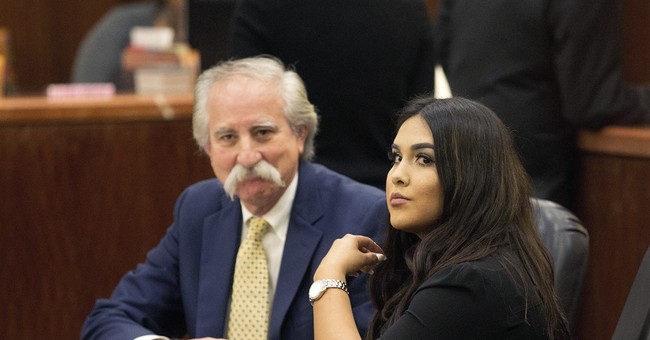 Trending
On Jan. 13, a judge in Houston, Texas, sentenced Alexandria Vera to 10 years in prison. Her crime? The 25-year-old teacher at Stovall Middle School struck up a sexual relationship with a 13-year-old student -- having sex almost every day, she said, for nine months -- but with the parents' approval. She could be eligible for parole in five years.

Prosecutors alleged Vera groomed the child and his family, moving the teen and his father into her home and pretending she was dating the father. She also bought groceries for the boy's family and paid the phone bills. She even became pregnant by the boy. When child-protection workers closed in, she got an abortion. Unsurprisingly, the boy is now in foster care.

One would assume this story of a sexual predator would be plastered all over the national news. Isn't this the kind of crusading story full of human interest and melodrama? Apparently not. ABC, CBS, and NBC couldn't be bothered. Fox had a segment on "The Kelly File" when it broke open last year. CNN's Headline News shows -- Drew Pinsky's last year, and Ashleigh Banfield's last week -- gave it a single spin.

One could guess that reverse sexism plays a role: An adult woman abusing a boy seems more acceptable than a grown man molesting a young girl. One could also guess that adding an abortion to the sinister plot made it less interesting to liberal journalists.

These are the same networks that will not stop covering and lecturing about the child sexual abuse -- real and alleged and untrue -- by Catholic priests, even after the church created new systems to vet not only priests but also even church volunteers who deal with children in parish life.

How about newspapers? The New York Times never loses interest in advocating against the Catholic Church on this issue. But on Alexandria Vera in Houston? Nothing. The Washington Post, whose editor Marty Baron was painted as a crusading captain of the church-busting team at the Boston Globe in the Oscar-winning movie "Spotlight"? It never made the actual paper but drew two blog posts over the last six months that barely surpassed 1,000 words between them.

Many people might see this story and recall the case of Mary Kay Letourneau, a 34-year-old teacher who sexually abused an infatuated 12-year-old boy named Vili Fualaau, which became a big tabloid story in 1997.

But ultimately, how bothered are some in the liberal community? It's easy to forget that abuse ended up being rewarded. In 2005, after getting out of jail, Letourneau agreed to marry the boy, now an adult. Hollywood then allowed them to cash in.

Paramount -- the producers of "Entertainment Tonight" and "The Insider" -- announced they had obtained the rights to wallow in the pedophile wedding of the century. What did Paramount do? The two shows spent days panting after the "lucky couple." Inside the rehearsal dinner. Inside the wedding. Inside the reception. Paramount interviewers even asked Letourneau for relationship advice!

Their rivals at "Access Hollywood" played the moralist. Co-host Billy Bush insisted Paramount paid big money for the privilege, "close to $1 million -- a figure they deny," Bush said. "Go to prison; get on TV; get rich," he lamented.

The disease spread to network TV. In a piece for ABC's "Good Morning America," "Entertainment Tonight" reporter Jann Carl hyped the wedding as "the icing on the cake of a notorious soap opera that still sparks admiration and outrage around the world." Hold on. Just who "admires" the rape of a 12-year-old boy?

Child sexual abuse in secular schools doesn't seem to inspire liberal journalists, which underlines that on this absorbing subject, as on many others, what's "news" depends on perspective, and in the American media, it is both liberal and libertine.