Brent Bozell and Tim Graham
|
Posted: Sep 28, 2016 12:01 AM
Share   Tweet
The opinions expressed by columnists are their own and do not necessarily represent the views of Townhall.com. 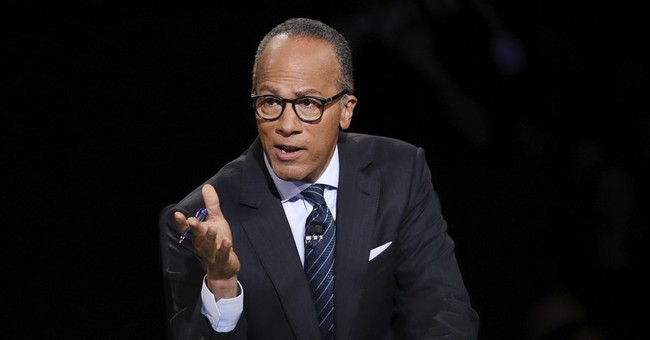 Washington Post reporter Callum Borchers should win some kind of award for the worst pre-debate spin. He tried to defend NBC anchor and presidential debate host Lester Holt: "It turns out Holt is actually a registered Republican. Trump still might find things to complain about Monday night, but a case for partisan bias against him will be tough to make."

Right after the debate, despite all evidence, the Post's Chris Cillizza doubled down, saying: "Want a testament to how well Holt did? I guarantee you no one is talking about him tomorrow. That's a win."

What about Hillary Clinton? There was not one single challenge to anything she said, not one tough question about any policy or any controversy, be it Benghazi, the Clinton Foundation, her medical records or her emails -- unless you want to count when Holt politely suggested: "(Trump) also raised the issue of your emails. Do you want to respond to that?"

The Rasmussen Reports poll that came out just before the debate showed that based on the historical record, 46 percent of Americans believe most moderators will tilt the debates in favor of Clinton. Only 6 percent think they will try to help Trump. That's an 8-to-1 landslide.

Holt confirmed the wisdom of the American people.

It became obvious that Holt internalized all the howls of outrage from the liberal media against Matt Lauer for being even-handed with the candidates at the commander-in-chief forum earlier in the month. Editorials were written by anguished staff of both The New York Times and the Washington Post. He might have even heard Jimmy Kimmel rant at "The Apprentice" creator Mark Burnett while hosting the Emmy Awards. He said, "Thanks to Mark Burnett, we don't have to watch reality shows anymore because we're living in one."

Holt's colleagues -- and Clinton's campaign -- said very publicly that he must go after Trump as a clear and present danger to America. That's exactly what he did.

On the morning after this one-sided assault, Holt's colleagues in the liberal media projected an image of him as mellow and reserved, and therefore nonpartisan. The New York Times headline was "Lester Holt Opted for Restraint." Reporter Michael Grynbaum began the column saying, "Call him the minimalist moderator." He described how Holt "opted to lie low" and "was silent for minutes at a time," and then reported that The New Yorker had published a liberal parody called "CNN Launches Manhunt After Lester Holt Vanishes From Debate."

To stick to its "minimalist moderator" spin, the Times chose to ignore most of the debate. Weeks before, Grynbaum wrote an anguished piece after the Lauer forum called "Matt Lauer Fields Storm of Criticism Over Clinton-Trump Forum." He even quoted tweets that mangled the facts, such as one from political commentator Norman Ornstein, which said: "Lauer interrupted Clinton's answers repeatedly to move on. Not once for Trump." In fact, Lauer interrupted Trump 13 times and Clinton seven times.

The only similarity in the stories is that Grynbaum failed to locate an actual conservative or Republican critique of either NBC journalist. That's because the liberal media can't help but slant everything in favor of the left. It's no wonder most Americans no longer trust them.