Brent Bozell and Tim Graham
|
Posted: Jun 22, 2016 12:01 AM
Share   Tweet
The opinions expressed by columnists are their own and do not necessarily represent the views of Townhall.com. 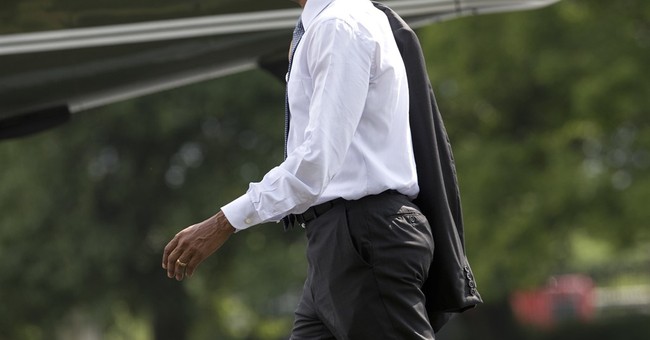 In the swing of the Trump wrecking crane, President Obama's approval ratings have risen above 50 percent. The media see greater appreciation for his "competence" in office -- but, why? In the wake of the Orlando attack it's easy to ask, "How competent would the media have made President George W. Bush appear if an Islamic terrorist shot up a gay nightclub in Florida eight years ago?"

It seemed like every piece of bad news during the Bush years was somehow Bush's fault -- and proof of his incompetence. The media's attitude toward Bush was summed up in Bill Maher's diatribe to Jay Leno on "The Tonight Show": "The man is a rube. He is a dolt. He is a yokel on the world stage. He is a Gilligan who cannot find his ass with two hands."

But absolutely no one in the media wonders for two seconds if Obama looks incompetent when a terrorist calls the cops to declare himself an ally of ISIS and shoots more than 50 people, killing 49. Instead, the post-shooting "news" focused on how the Republican love of "assault weapons" and hatred of homosexuals are the obvious targets for blame.

What of Islamic terrorism? What of Obama's incompetence -- his very real refusal to even call the threat by its name? It doesn't matter if it's San Bernardino, the Boston Marathon, Chattanooga, Benghazi or Fort Hood. No terrorist attack has ever cast the slightest shadow over this president.

The same goes for hacking. When the Russians hacked the Democratic National Committee computer network to gain opposition research on Donald Trump, who was blamed? The Washington Examiner wrote, "The White House reacted ... by complaining that Republicans have blocked additional money for funds to enhance the nation's cybersecurity."

Last summer, we learned that hackers -- presumably Chinese -- breached the Obama-run Office of Personnel Management and stole data from background investigations covering 21.5 million people, including current, former and prospective federal workers. A Media Research Center study found that broadcast news networks protected the president by refusing to criticize the administration in 90.2 percent of cybersecurity stories (139 of 154). The sample stories included reports of serious data breaches at the OPM and IRS, theft of emails from the Joint Chiefs of Staff and top administration officials, and possible hacks of major airlines and Wall Street.

Newspaper editorial pages only sometimes harshly criticized Obama on those issues. Last July, the Washington Post editorial board accused him of demonstrating "inexcusable negligence" on cybersecurity and being "way too passive about China."

Why isn't this news? Network anchors like Scott Pelley of CBS suggested the cyberattack was a problem for the whole country, not just Team Obama. In an interview last August, he asked Secretary of State John Kerry: "With all of the attacks that have come apparently from China on the U.S. government, there is a sense that the United States is unable to defend itself in the cyber world. How much concern should we have?" Kerry said the government was "fighting back" against attacks daily, but the cyberworld is pretty much "the Wild West so to speak."

Throw into this mix the scandal of former Secretary of State Hillary Clinton using a very hackable private server for four years with no outbreak on competence from Obama officials. The media attitude is evidenced by Sen. Bernie Sanders, who doesn't want to talk any more about those "damn emails." Meanwhile, no one wonders how Obama could be so cavalier about the cyberthreat she created.

To the press, Obama's competence is automatically assumed. It's a given like knowing the sun will rise in the east. Part of it is the press' personal attachment to Obama, and part of it is the hidebound liberal assumption that the party that grows government the most governs best.