The Media's Softness for Sanders and Socialism

Brent Bozell and Tim Graham
|
Posted: Feb 10, 2016 12:01 AM
Share   Tweet
The opinions expressed by columnists are their own and do not necessarily represent the views of Townhall.com. 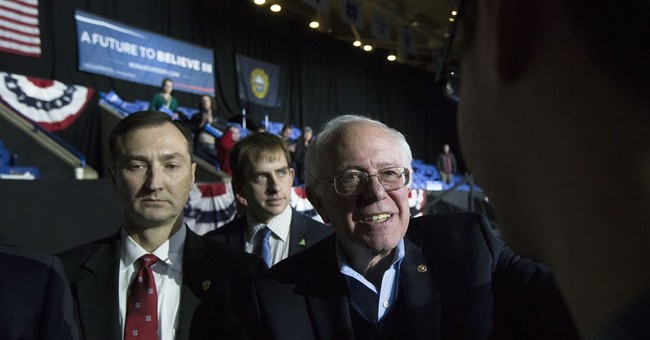 At the start of the Democratic presidential race, the media viewed the contest as a cakewalk. The compassionate and gloriously wonky Hillary Clinton faced no one who could be viewed as her equal. Game over. When Sen. Bernie Sanders made noises about running against her, nobody thought he could be the actual Democratic nominee. He was old, he was cranky, and he wasn't even a Democrat.

The conventional media wisdom had it that Sanders would be a healthy deterrent to the Clinton tendency to crawl toward the corporatist middle. On NPR, Washington Post columnist E.J. Dionne saw it as positive: "Let's list two names who we don't get to talk about, Eugene Debs and Norman Thomas. This is the most serious socialist candidacy for president since they ran. But Bernie Sanders has a long list of particulars that he wants to put on the table, and I think by shifting the campaigns to economics, he will generally help Democrats."

Yes, the media elite, which eternally predicts the tea party and the Christian conservatives will destroy the Grand Old Party, could only see better days ahead for Democrats with a self-described socialist contender in the race.

Sanders reminds conservatives of that appendix in Milton Friedman's 1980 book "Free to Choose" where he underlines that most of the 1928 Socialist Party platform of Norman Thomas was already part of the American federal establishment when President Reagan began his tenure. The Democrats distance themselves from the word "socialist," but continue marching the country toward its definition.

The usually servile Chris Matthews has offered one important contribution in recent months by asking leading Democrats to name the difference between a Democrat and a socialist, only to watch them babble and bumble over their barely suppressed ideology. DNC chair Debbie Wasserman Schultz tried to change the subject to the difference between Democrats and "right-wing extremist" Republicans. Sen. Charles Schumer protested, "I'm not going to get into it." Hillary said, "You'd have to ask him [Sanders]."

Journalists like Karen Tumulty at The Washington Post have described the Democratic base as torn between their idealistic (socialist) heart for Sanders and their poll-calculating head favoring Clinton. So the more that the garbage barge of ethical scandals casts a pall over Clinton's image, the more tempting it is for Democrats to toss out the caution and go crazy for the capital-S socialist.

Sanders is running a campaign based on the concept of American exceptionalism in reverse. America is exceptional only in her pathetic failure to enact every socialist "reform" that Scandinavian countries have ever implemented. He barks that America is a "great country," so of course it could be truly "great" in abandoning every notion of liberty that ever crossed the minds of the Founding Fathers.

When Rachel Maddow asks Clinton in a Democratic debate whether she is "too far to the right" for Democratic voters, it only underscores the media's location on the political spectrum. It's way over in a spot where Sanders is championed as a mainstream Democrat while boosting an "Occupy Wall Street" agenda, where every financial institution is smeared as "based on fraud," and where everything begs for a hostile government takeover.

If America ever succumbed to a President Sanders, we'd suggest the vaunted "revolution" should start by nationalizing the media companies, and throwing pampered anchors out of their high-priced Manhattan condos to house the homeless.