The 'Science' of Sex Education 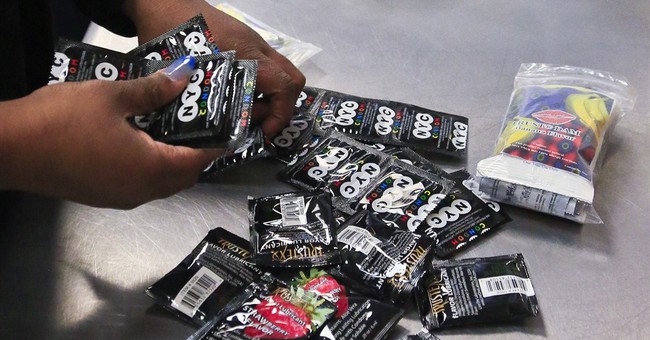 Trending
There's no classroom experience the libertine supports more mightily than "sex education." They have struggled to banish even a whisper of a religious worldview from the classroom. Only the secular and "science-based" ideology is allowed.

Do the guardians of "science" -- like the happy "reproductive justice" folks at the American Civil Liberties Union -- think this is "medically inaccurate" because no child can avoid having sex before graduation?

Liberals arrogantly think their "science" is superior because their religious opponents base their sexual ethics on faith, not on reason. (In truth, advocating abstinence is based on both.) These are the same radical "scientists" who tell us a baby isn't technically a baby until it's left the hospital, and insist that gender should not be oppressively "binary" or based on primitive methods of analysis, like looking at your genitals.

"Science" has arrived! The Daily Beast mourns that this wouldn't "stand a chance" in archaic America, even though the Norwegians claim "the overall reception to Jansrud's joyous deconstruction of the most mysterious time in a young person's life has been overwhelmingly positive." And the effects on little children? "The most dangerous consequence for Norwegian preteens has been a few red faces."

The "joyous deconstruction" of sex has surfaced in America. These revolutionaries would probably saddened to hear that the authorities at Hampshire High School in Romney, West Virginia, managed to stop a spring showing of the porny R-rated sadist-sex romp "Fifty Shades of Grey" in a classroom as a reward for hard academic labor. The "medical accuracy" of that film could be very educational, they might argue.

And at Champion Theme Middle School in Stone Mountain, Georgia, a teacher of advanced "scientific" mien is being fired for organizing sexual trysts during school hours for eighth graders in one of his classroom closets. One mother discovered a long series of text messages between her 14-year-old son and his teacher, who warned he didn't provide the condoms, just the closet, and that the girl "can't tell anybody."

This wild lack of discipline ends at the cafeteria door. At lunchtime, the highest expectations for healthy behavior are demanded. The first lady of the United States insists that children must eat a government-mandated menu of broccoli and whole grains. No one on the libertine left argues it's unrealistic to expect children to eat their vegetables, even as the garbage cans overflow.

Apparently, you can lead a child to French-kiss a tomato, but you can't make them eat it.