The Whitewashing of Ted Kennedy 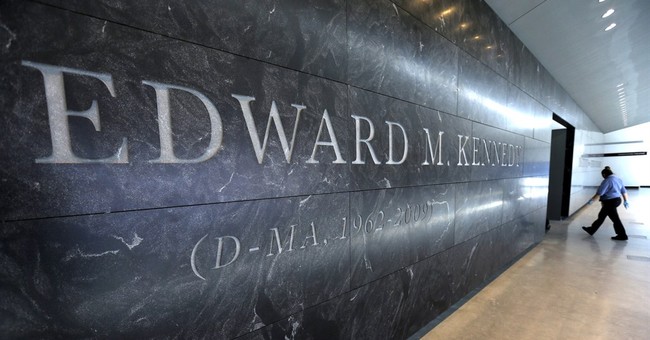 Imagine an eighth grader, presented with a portrayal of Sen. Edward Kennedy, the late patriarch of the "royal family" of American politics. The student would learn nothing but legends about "the greatest senator of all time," as Sen. Ed Markey proclaimed.

On the occasion of the opening of an "Edward M. Kennedy Institute" in Boston, "CBS Evening News" anchor Scott Pelley oozed, "Another New England superstar was honored today. Politics was his game, and we'll have his story next." There was not one discouraging word -- not even the word "liberal" -- applied to arguably the single most leftwing senator of all time.

This is not a bipartisan practice. When President George W. Bush dedicated his library on April 25, 2013, CBS reporter Jim Axelrod insisted that "this library is an intellectual fortress defending one of the most controversial modern presidents, whose time in office saw the (9/11) attack on the U.S., two wars and the worst financial crisis since the Great Depression."

The whitewash was so complete that even "Fox News Sunday" host Chris Wallace barked up the carnival: "Up next, our Power Player of the Week: Vicki Kennedy, on her husband's vision to inspire new generations about the U.S. Senate." Wallace noted that Teddy was fiercely partisan, and the second Mrs. Kennedy replied, "He was the proudest Democrat that there was, but the great thing about Teddy was that he always listened to the other side and worked so well with the other side."

Except he didn't. Let us recall his vicious "Robert Bork's America" speech in 1987, when he stated, "Robert Bork's America is a land in which women would be forced into back-alley abortions, blacks would sit at segregated lunch counters, rogue police could break down citizens' doors in midnight raids, schoolchildren could not be taught about evolution, writers and artists would be censored at the whim of government."

But NBC brought on his son Patrick Kennedy to proclaim, "My dad was always an optimist. I mean, having overcome so many of his own personal challenges and political challenges -- I mean, this was a guy that everyone loved. Why? Because he persevered."

One might expect Teddy's politician son to spin things this way, but it doesn't mean the hyperbole should go unchallenged by a discerning press. "A guy that everyone loved?" The 1970s, 1980s and 1990s would beg to differ.

In these "superstar" tributes, there was no talk of womanizing, before and after the senator got divorced from Joan Kennedy in 1982. Gearing up for Kennedy's presidential run in 1979, Time magazine ran a piece titled "Sex and the Senior Senator." They wrote, "The mere mention of Edward Kennedy's social life is enough to make an editor's head throb." They lamented out loud about how to handle the topic, concluding with a D.C. dinner party where "14 talented and interesting men and women talked of nothing but (Kennedy's) sexual activities."

But now? Sen. John McCain announced on "Face the Nation" on CBS that Kennedy was a man of his word (and his vows?): "Ted always kept his word. The only times I saw him angry was when somebody didn't keep their word to him." At the opening ceremonies, President Barack Obama shamelessly asked, "What if we carried ourselves more like Ted Kennedy? What if we worked to follow his example a little bit harder?"

Does this involve his driving habits? Oh, that.

The double standard also happened in newspapers. With Bush in 2013, New York Times reporter Peter Baker gave Bush-bashers their due, writing, "While critics have fumed about what they called the whitewashing of his record in the media blitz leading up to the library dedication, many Americans have been reminded about aspects of Bush they once liked."

But the Times published two gush-filled articles on Teddy, without a single mention of a Kennedy critic. Reporter Carl Hulse wrote, "Members of the (Kennedy) institute's staff said it was not too late for younger Americans to learn how to tolerate an opposing point of view."

But is it too late for journalists to learn journalism?