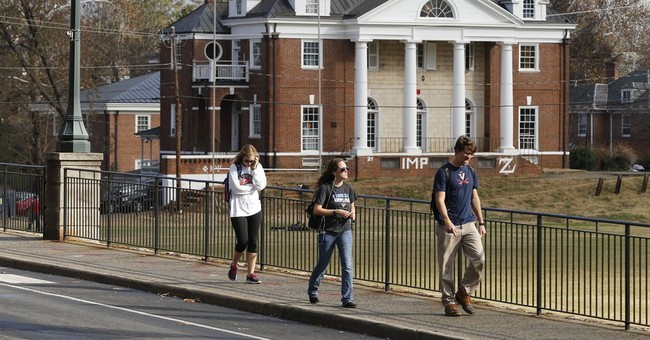 No parent wants to consider the travesty that when he sends his 18-year-old daughter to college, she could be vulnerable to sexual assault. But in the increasingly punitive atmosphere surrounding sexual-assault allegations, he should also fear sending his 18-year-old son to campus, where he may be falsely accused of rape.

The national media are deeply feminist. Their default position is the presumption that "the victim" is the female accuser. Some pundits have even argued in national newspapers that the accuser should be "automatically believed."

This is a serious problem for the left. First, they are the ones who have been exquisitely sensitive about the presumption of innocence for communists, radical Muslim terrorists and violent thugs like Willie Horton. Second, they have forcefully extolled that female accusers of sexual assault are to be automatically disbelieved if they are accusing Bill Clinton or other powerful Democrats. These allegations and any attempt to discuss them or verify them are considered "witch hunts" and "McCarthyism."

In mid-November, all the networks lunged when Rolling Stone magazine published a horrific account of an alleged gang rape in September 2012 by seven men at a fraternity house at the University of Virginia. The word "alleged" wasn't used by Rolling Stone. There was a presumption of guilt. The reporter, Sabrina Rubin Erdely, was celebrated.

The story's subheadline told us that "Jackie was just starting her freshman year at the University of Virginia when she was brutally assaulted by seven men at a frat party. When she tried to hold them accountable, a whole new kind of abuse began". Jackie was led to the scene of the crime by "Drew," a frat brother she worked with at the college swimming pool.

Within hours of this tilted story's publication, Phi Kappa Psi, the fraternity where the alleged assault took place, was vandalized, with "UVA Center for Rape Studies" spray-painted on the outside.

It took time for the facts to catch up to Rolling Stone, but when they did, they were devastating. The fraternity and newspapers like the Washington Post began to tear the story apart. There was no party at Phi Kappa Psi on the date in question. There was no fall pledge drive, as reported (those occur in the spring). There was no frat member who worked at the swimming pool. Erdely made no attempt to contact the accused (anonymous) men who were presumed guilty. Soon, even the "rape advocates" who championed Jackie's courage in speaking out were expressing regret that her story kept changing.

To their credit, the same networks that charged right in and reported the Rolling Stone story (with 11-plus minutes of coverage scolding the University of Virginia's unawareness and inaction) turned around and reported the story fell apart. But who had been the abuser in this scenario?

The national media's discredit came in accepting Rolling Stone sight unseen in the first place. This is not the way these "watchdogs" handled Juanita Broaddrick's charge of rape against President Clinton in 1999. Even after NBC's Lisa Myers nailed down particulars establishing that Clinton and Broaddrick were in the same hotel on the same day in 1978, with witnesses who vouchsafed her tortured condition, the networks all but ignored the accuser and her story.

When the Rolling Stone account collapsed, the media put their stress on the tragedy for the accusers, and not for the accused. There was no soundbite of outrage in the aftermath for the injustice done to UVA or the fraternity, both having been so demonized by the media.

Just as in the Michael Brown case, the media's reaction carried the odor of "Heads we win, tails you lose." Facts were irrelevant. The liberal media never lose their halo as the sympathetic guardians of the public good, no matter how wrong -- painfully, harmfully wrong -- they are.