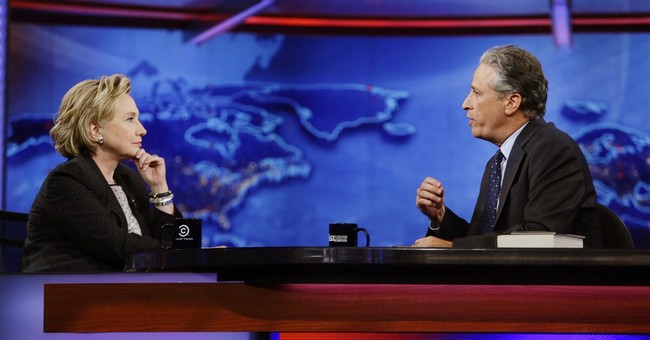 The liberal legend of Jon Stewart began with his Oct. 15, 2004 appearance on CNN's "Crossfire," where he rhetorically sentenced the show to death. He proclaimed, "It's hurting America. Here is what I wanted to tell you guys: Stop. ... You have a responsibility to the public discourse, and you fail miserably."

As is so typical of liberals who preach one thing while doing its opposite (Leonardo DiCaprio, call your office), Comedy Central has never felt any responsibility to "the public discourse." If we applied Jon Klein's standard, it would be time for "The Daily Show" to be canceled.

It claims to be a "fake news" show that satirizes what's wrong with news. It could be that -- but it isn't. It is everything that is wrong about today's snarky liberal media elite.

Stewart and his producers are well-known for creating taped interview segments that cut every ethical corner to get cheap laughs -- while cutting conservatives into pieces. There is no attempt at fairness or accuracy. Producers lie without remorse to interview subjects.

Take four die-hard fans of the Washington Redskins, who were unsuspectingly invited to a taped ambush by "The Daily Show" on Sept. 13, according to The Washington Post. After being told this was a panel discussion that would not be an on-camera debate with leftist Indian activists who hate the team name, Team Stewart then brought in the Indians to shame the Redskins fans. The Post reported the debate, if you can call it that, was "so tense that an Alexandria fan said she left in tears and felt so threatened that she later called the police."

Kelli O'Dell, a 56-year-old former teacher who doesn't really watch Stewart's show, told the Post "It was disingenuous. The Native Americans accused me of things that were so wrong. I felt in danger. I didn't consent to that. I am going to be defamed."

Brian Dortch, who has a home-repair business, said he and the other fans had asked in advance if there would be a debate. The producers said there would be a panel of fans and a panel of Indians. "So I said back, 'Just to clarify, specifically, we're not doing a cross-panel discussion right?" According to Dortch, the producer replied, "Yeah, right. That would be too serious for Comedy Central."

After three long hours of interviewing, Comedy Central "correspondent" Jason Jones waved in four angry Indians who were told in advance of the ambush. Jones then brought out some beer and chicken wings to watch -- implying he was going to enjoy watching as the Redskins fans suffered a psychological beating.

O'Dell said she felt trapped. "I was told that I was 'psychologically damaging Native-American children,' and every time we tried to say something, we got cut off," she said. There was no debate. There was only an attempt to shame and humiliate the "racist" Redskins fans.

What's amazing is how liberals -- even journalists -- welcomed this spectacle. Washington Post reporter Paul Kane dismissed his own newspaper's story on Twitter: "I'm sorry but at this stage you can't complain about being 'misled' by Daily Show/Colbert interviewer. Joke's on you."

Matt Essert at the liberal blog Mic encouraged the lying: "Tricky, but smart: Though Jones' tactics might seem deceitful, at this point in the show's history, it's hard to possibly imagine that any interview on the show will be straightforward."

All this cynical entrapment is, to borrow from Stewart, a menace to the "public discourse." The "Daily Show" producers are chuckling like cowards. Note how the segments are taped -- and edited. They're never live, when Stewart wouldn't have a chance.