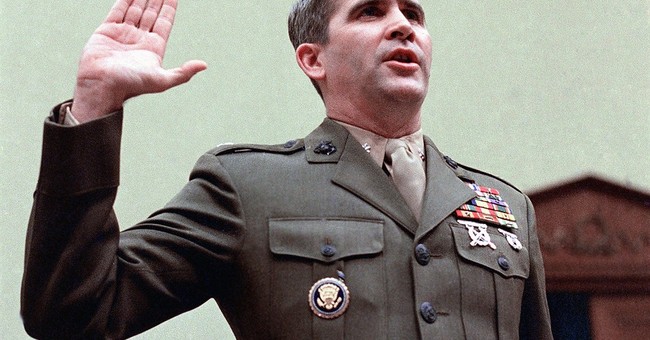 For its second season, the creators of the FX series "The Americans" have chosen a new source for insight into the Cold War during the Reagan years -- one Lt. Col. Oliver North.

It's a dramatic reversal from the first season, and it has infuriated some hard leftists. The show began with the shocking promise from creator Joel Weisberg that the series' heroes would be KGB agents: "We're making them the sympathetic characters. I'd go so far as to say they're the heroes." It quickly became apparent that these characters could be unsentimental killers of innocent Americans, so perhaps that triggered a change of heart.

What's resulted in the second season has been a more conventional dramatist's take: The KGB agents are morally conflicted, and so is the FBI agent who lives across the street. The reaction from the hard left is equally conventional. After shocking conservatives before the first season began, Weisberg's decision to hire North to consult on the second season has thrown these liberals for a loop.

The New York Times ran a nasty article headlined "Oliver North, Now in the Service of TV's K.G.B." Get a load of how TV reporter Dave Itzkoff described liberals who are annoyed with North's support for anti-communist freedom fighters in Nicaragua during the '80s: "Close observers of contemporary American history say they are irritated by what they see as Mr. North's continued attempts to aggrandize and whitewash his role in it."

But what does Iran-Contra have to do with this FX storyline? And who are those nameless "close observers" anyway?

The "close observers," who must not be called "liberals," include Leon Wieseltier, the literary editor of The New Republic, who said North's involvement in "The Americans" was "basically a bad joke." He complained, "Everything that happens in history in this country eventually winds up as entertainment ... you become notorious, and your notoriety makes you famous, and fame is the American version of glory."

Wieseltier concluded: "Given his insistence upon his purity of heart and soul, there's something a little tacky about his exploiting it."

The Times and Wieseltier do not hold this opinion on other modern historical figures if they're standing on the other side of the fence. Valerie Plame Wilson, a former CIA operations officer, certainly cashed in with lucrative book and movie deals after her identity was revealed, but she was trashing George W. Bush, so she wasn't exploiting, aggrandizing or whitewashing. Her sudden wealth was a cash reward akin to an alternate Nobel Peace Prize.

Or take Anita Hill, a favorite of New York Times editor Jill Abramson. Hill insisted on the "purity" of her heart and soul after her unsubstantiated charges of sexual harassment against Clarence Thomas. Even when Hill exploited it for a book deal worth more than a million dollars, after insisting she'd never do such a thing, it still didn't chill left-wing enthusiasm. In fact, they're still at it.

The Times recently lauded a new liberal documentary called "Anita," which hails Hill. The Times described it as "an important historical document about an event that prompted a larger cultural conversation about sexual harassment."

The paper wasn't impolite enough to nudge out of its own editorial-page archives a Hill article defending Bill Clinton during the Lewinsky scandal in 1998. Hill bizarrely claimed, "The substance of sex-related accusations against President Clinton differs dramatically from those raised against Justice Thomas or (Sen. Bob) Packwood." That's ridiculous on its face.

For all their alleged appreciation of nuance and complexity, liberal journalists play a simplistic game in identifying saints and sinners, geniuses and goons. The degree to which you embrace and advance liberalism is the degree to which you can do no wrong, and commit no ethical, egotistical or mercenary offense.