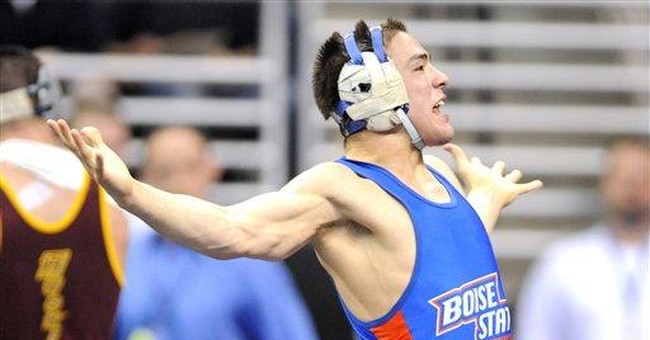 It's so easy to look at teenagers in general today and sigh. They're more than a bit lazy, a bit spoiled and more than a bit morally compromised. Two teenagers made national news. One showed common decency and sportsmanship, two virtues seemingly uncommon in that generation. Hope is restored.

Sixteen-year-old wrestler Joel Northrup faced a dilemma when he was scheduled to wrestle Cassy Herkelman, one of only two girls to make it to the state tournament. Even though he entered with a 35-4 record, Northrup forfeited rather than violate his religious principles.

Cassy's father, Bill Herkelman, praised the Northrup family: "That's their belief, and I praise them for sticking to it. This is the biggest stage in wrestling in the state, I would say, and they stuck to their beliefs when it probably tested it the most," he said. "It was probably a tough pill for him to swallow."

That's putting it mildly. High-school wrestling is very popular in Iowa and other Midwestern states, where the state tournament is televised.

Northrup then made the rounds of national TV talk shows to address the decision. "There's no specific scripture or verse in the Bible that condemns wrestling girls," Joel told the "Fox & Friends" show. "It's more of a Biblical principle of treating the opposite gender with respect ... I don't think wrestling should be a coed sport because of all the compromising holds and everything."

Northrup didn't say anything about discomfort over wrestling a girl because it was personally embarrassing or sexual in any way. It wasn't about the bad publicity that would result if he gave her a broken forearm or a concussion. It was about elevating the woman. Shoving a woman's face into the mat is undignified. He told CBS it gets "violent at times ... I just don't feel it's right that a boy should engage a girl ... like this."

Only in our stupid popular culture is such a position considered controversial. CBS put this question on screen: "Chivalry or Chauvinism?" But these aren't really opposites. For many years, the feminists have waged war on the idea that men would "stoop" to chivalry, like opening doors for women or giving up a seat on a subway train for them. Being a "gentleman" was another word for being a patronizer -- a chauvinist.

Sadly, you knew some ink-stained wretch would think Northrup's decision was sexist, demeaning and religiously obtuse. Enter ESPN.com columnist Rick Reilly, who slammed anyone and everyone who respected this moral decision, including Cassy Herkelman and her father: "Does any wrong-headed decision suddenly become right when defended with religious conviction? In this age, don't we know better? If my God told me to poke the elderly with sharp sticks, would that make it morally acceptable to others?"

In Reilly's moral universe, "Body slams and takedowns and gouges in the eye and elbows in the ribs are exactly how to respect Cassy Herkelman. This is what she lives for ... She relishes the violence."

Reilly then bizarrely claimed that it wasn't cruel to gouge her in the eye; it was cruel to send her into a "national media hurricane" -- identified as about 20 sports reporters and columnists -- to be asked not how she wrestled, but how she advanced without wrestling.

The ESPN columnist ended this sneering diatribe by suggesting this 16-year-old boy "wasted" his dream of a championship and was just uncomfortable with girls being on Earth. After Northrup was eliminated in an overtime match, Reilly wrote, "He was reportedly on his way back home to Marion, Iowa, where his mom was about to deliver her eighth child. For the kid's sake, I hope it's a boy."

Northrup didn't deserve the wave of national abuse he received from so-called defenders of women. It was additionally unnecessary when his female opponent wasn't offended. But it won't be the first or the last time that sports writers from New York City come to Iowa to lecture the hayseeds.

No one, of course, seems willing to ask the other question: What was the Herkelman family doing encouraging their teenage daughter for years to wrestle competitively with males -- with every implication, physical and sexual?