Preferring Liberals in Both Parties 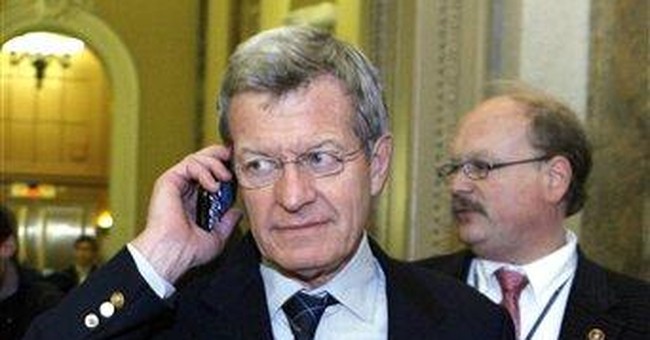 The Washington Post recently gave us a case study in this slanted worldview. On Dec. 14, they splashed across the front page an article by reporter Michael Leahy on an obscure California Republican assemblyman named Anthony Adams. The charge: He betrayed his no-new-taxes vow and supported a $12 billion tax increase. The Post analysis: Adams was savaged by the "toxic infighting" of nasty conservatives, who moved (unsuccessfully) to recall him from office.

On the front page, Leahy described how the obscure Adams became "a symbol of California Republicans' chaos and destructive divisions." An entire page inside the paper was set aside for the sympathetic chronicle of how Adams was subjected to death threats and less frightening hostility from conservatives -- including his own mother-in-law. Adams was portrayed as lovable, "bearded and portly," favoring colorful sweaters to stuffy suits and ties. He was a man for whom conservatism faded as reality made its demands: "the exigencies of government collided with his pledge against more taxes." You could almost smell the growth.

The Post highlighted in large type the words of moderate Tom Campbell: "I don't think it's good for our party to go into a circular firing squad." The Post never considered the troublesome reality that it was Adams who first opened fire by breaking his word to his constituents and betraying his party.

The California story is part of a series that underscores the leftist slant in the Post. It argued that the GOP has "begun to revive," but it "has not regained the confidence of voters, lacking both a positive agenda and a new generation of identifiable leaders." That's not an editorial. That's the company rationale for an entire series of Republican-trashing articles.

You might consider those words a mission statement for the Washington Post's reportage on Republicans. It reads like it's designed to prevent a GOP revival, prevent their positive agenda and prevent the emergence of inspiring new leaders.

Now dig back to the Post on Dec. 8, and see how a man who dares to be different inside the Democratic caucus is treated. Suddenly, the gloves come off and the reporters start swinging. Note the personal disgust in the very first paragraph of a Joe Lieberman story by Lois Romano and Alec MacGillis:

"Sen. Joseph I. Lieberman (Conn.) has once again inserted himself into the middle of an inflamed partisan debate, raising questions about his motives, his ego and his fickle allegiance to the Democratic Party, which forgave him after he supported Sen. John McCain (R-Ariz.) for president."

Back in California, the tax-hiking Republican was not the aggressor "inserting himself" into the debate and "inflaming" partisan debate. The Post didn't question "his motives, his ego, and his fickle allegiance" to the party. But Lieberman has dared to oppose the so-called "public option," where government "competes" -- or more accurately, takes over -- the private health-insurance market. So he is savaged.

Romano and MacGillis insisted that Lieberman clearly enjoyed his egotistical act as skunk at the Democrat garden party: "'There is no question he's taken pleasure in this role,' said Jacob S. Hacker, a Yale political scientist who helped craft the initial proposal for the public option." The Post accused Lieberman of being a liar: "Lieberman has assumed such a central role despite what health-policy experts say have been serial misstatements about reform proposals." Hacker lamented, "No one's called him on anything."

Readers are told there are 30-second TV spots running in his home state attacking him: "Joe never forgets who he ran to represent: Himself. It's not about you. It's all about Joe." The allegedly nonpartisan League of Women Voters is also launching radio spots to pressure him. Hundreds of protesters representing an interfaith organization showed up at Lieberman's home in Stamford and at his office in Hartford, to "plead (and pray) for him to support the bill."

Nowhere in this account were the liberals attacked for being excessively nasty and personal, or for conducting a "circular firing squad." The Post never hinted for a second that extreme ideological fervor from the Left might ruin the Democrats' chances to maintain power.

It's a simple formula, really. Anything that moves the GOP away from the Ronald Reagan vision is a good thing; any GOP "leader" who has the "courage" of his liberal convictions is a "maverick" to be saluted.

And any Democrat or independent who dares question Obama's socialist agenda is a traitor.