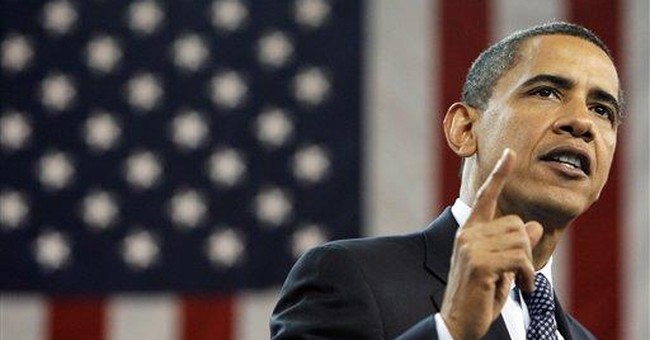 Martha Joynt Kumar, a scholar of presidential communications strategies at Towson University, reports that President Obama is almost everywhere in the media. In their first four months, Bill Clinton gave 11 interviews, and George W. Bush gave 18, compared with 43 from Obama. He has offered his eloquence to ABC News at least six times, seven times on CBS and nine times on NBC.

That large number doesn't count his latest TV interview blitz, or the four prime-time press conferences. But all this access to the media -- based on the strategy that Obama's charisma can overcome all objections to his policy nostrums -- isn't stopping the collapse of his attempts to rush the country into massive new spending and regulation schemes.

The public is getting bored. About 24.7 million viewers tuned in to Obama's latest TV show last week, according to Nielsen ratings, some four million fewer than watched his last evening news conference in April, and only half the number that saw his first one in February. The media are getting bored, too. Their decision to play up Obama's thuggish attack on the city cops in Cambridge, Mass., demonstrated Obama was losing control of the political narrative on the health-care front.

That didn't mean that reporters weren't trying to break news, but in the face of serious questions, Obama stonewalled. ABC's Jake Tapper asked point-blank whether the American people are "going to have to give anything up" in taxes or health-care limitations. Obama rambled strangely about an imagined scenario where a patient would supposedly see three specialists to get the same exact test, and the patient, the doctors and the insurance companies are all too dumb to realize this is unnecessary and wasteful, and they need the federal government to break this fabled logjam of cluelessness.

CBS's Chip Reid asked it another way: "You talk about cuts in Medicare, and they talk about cuts in Medicare, but there are never many specifics. Specifically, what kind of pain, what kind of sacrifice are you calling on beneficiaries to make?" Obama objected: "No, no." Reid inexplicably changed the subject and allowed Obama to skip over the sacrifice.

Again and again in the Bush years, the media insisted that Bush never asked the American people to sacrifice. But when reporters put the sacrifice question to Obama on health-care rationing or Medicare cuts, he isn't answering the question. Liberal reporters and pundits weren't outraged in the aftermath that he wasn't brave enough or honest enough to call for sacrifice.

A new study by the Business and Media Institute shows that if liberal health plans are losing popularity, it can't be blamed on TV news. From Jan. 20 to June 24 on ABC, CBS and NBC, fully 70 percent of the soundbites supported Obama's leftist health-care ideas. Network reporters exaggerated the number of uninsured Americans up to "50 million." The networks ignored how big-government health schemes like the one in Massachusetts were more costly than planned.

But 70 percent positive coverage is not enough. Just as Clinton used to do when the media were anything but fawning, Obama is whining that journalists are peddling "myths." In a conference call with liberal bloggers on July 20, he claimed, "I know the blogs are best at debunking myths that can slip through a lot of the traditional media outlets."

According to Obama, the supposed No. 1 "myth" is that his "reform" agenda is expensive. The nonpartisan Congressional Budget Office -- with a director selected by the Democratic majority -- sent a torpedo into Obama's plans when they concluded the legislation currently being debated would raise the federal deficit, not reduce it. "It's simply not true," claimed Obama to the bloggers.

Again, you can't blame the networks for this bad publicity. When the CBO report came out, CBS and NBC skipped it.

This eroding political campaign is beginning to smell like the expiration of Hillary Clinton's massive health-care overhaul proposal 16 years ago. The networks praised her to the skies. She was so intelligent and fluent in policy. Her almost-bionic brain was only matched by her deeply compassionate heart. Hillary gave a number of interviews with sappy anchors like Dan Rather. NBC gave her a two-hour town meeting, funded by a pro-Hillary foundation. But in the end, despite all the liberal media bias, Hillarycare tanked. American wasn't -- isn't -- buying.

Barack Obama surely thinks he proved in the primaries how much more charismatic he is than Hillary Clinton, so the same fate couldn't possibly happen to him. What he's proving now in every interview is that the charm has worn off, and the liberal-media hype is no longer effective. The conservative alternative media army is beginning to see their skepticism about Obama take hold. Expect the "mainstream" media to start pounding on them.