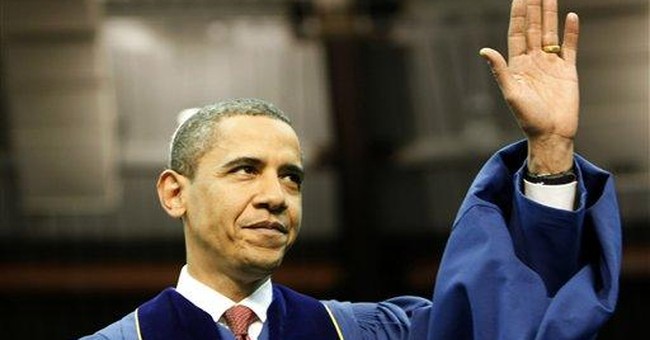 President Obama came to the campus of Notre Dame armed with all his usual arrogance. Despite his radical abortion record -- which includes championing a policy in Illinois wherein aborted babies who manage to survive are tossed aside, to die -- he posed as the national moderator of "common ground." And he did it by plugging a yellowed old tale from his campaign memoir "The Audacity of Hope." All he left out were the words "Order now on Amazon.com. Just $16.50 in hardcover."

Obama is loaded with nothing more than audacity. His speech no doubt pleased liberals, who love to pretend they're for all the mushy inclusiveness Obama pretended to favor -- "Open hearts, open minds, fair-minded words." This from the politician who spent 20 years listening to the rantings and ravings of Jeremiah Wright? This from the politician who unleashed more than 100,000 negative ads on John McCain?

Not unexpectedly, the networks embraced Obama's pose as the pragmatic pacifier of the "culture wars." On Sunday night, ABC anchor Dan Harris proclaimed: "Today President Obama walked right into the heart of the abortion debate and essentially told both sides to lower the volume." NBC anchor Lester Holt framed the controversy as "President Obama today stepped squarely into the middle of what may be this country's deepest cultural, religious and political divide."

It's outrageous enough to give Obama credit for showing his face at Notre Dame. He certainly wasn't going to stop campaigning for the votes of liberal Catholics. He saw the Notre Dame speech as an opportunity to confuse the public about his abortion extremism on the cusp of his first Supreme Court nomination, sure to be on the radical left.

But it's not just outrageous, it's also ridiculous to place Obama anywhere near the "middle" of the abortion debate. His actual record and his policies as president belie any notion of Obama disappointing the abortion lobby in any way.

In the first 100 days, Obama delighted people like Cecile Richards, the head of the Planned Parenthood abortion empire. On the Huffington Post, Richards announced there were "champagne corks popping" over Team Obama's early record, adding, "there is no way to overstate the revolutionary change that is taking place."

Her list included how Obama lifted the "global gag rule" to allow aid to international abortion advocates, "restored affordable birth control for women and girls," supported the stripping of funds for abstinence-based sex education, and lifted any restriction on the over-the-counter sale of Plan B "emergency contraception" for "women 17 years and older." He also placed fierce, feminist, in-your-face favorites in the important abortion positions, like Hillary Clinton as Secretary of State and Kathleen Sebelius as Secretary of Health and Human Services. That's not to mention the pro-abortion extremists appointed in the sub-cabinet ranks.

Continuing the outrage, we are told that Obama's position is one of "humility." In a bizarre column headlined "Conciliatory Fighting Words," Washington Post columnist E.J. Dionne insisted Obama's opponents want to "reignite" the culture wars and "see theological arguments as leading to certainty. He opted for humility."

Abortion advocates like Richards have hardly been humble in their ongoing campaign to increase the availability and government funding of abortions. They've never shown a lack of moral certitude, either, even as they lie on government documents to hide their intentions as their nasty clinics are built. Their war for "choice" and profit has never needed to be "reignited."

Obama infamously bowed before Planned Parenthood as a presidential candidate and promised to sign the "Freedom of Choice Act" -- a radical bill that would crush every state regulation that would attempt to restrain untrammeled abortion. Only nine percent of Americans support this hideous venture. How on earth can Obama be both an advocate of FOCA and the man calling for "common ground"? He can't. But his pliant press corps doesn't dare to point out the schizophrenia of his rhetoric and his record.

His forthcoming Supreme Court nominee inevitably will support the infallibility of Roe vs. Wade, which in itself was not a "common ground" initiative, but a top-down federal order used to scrap every state's ban on abortions. There was certainly no judicial humility in Roe: The liberal justices acted like legislators without shame, and imposed their will with great haughtiness.

Obama's liberal arrogance extended to suggesting to American Catholics that the real Catholic tradition is to serve as those "common ground" moderators, to show theological "humility" and work together on common social problems. He came to Notre Dame not simply to speak, but to attempt to help liberals redefine Catholic teaching and Catholic tradition. That's a pretty audacious position for a man to take when he never dared to object to or redefine the sulfurous gospel of Jeremiah Wright in 20 years in the pews.