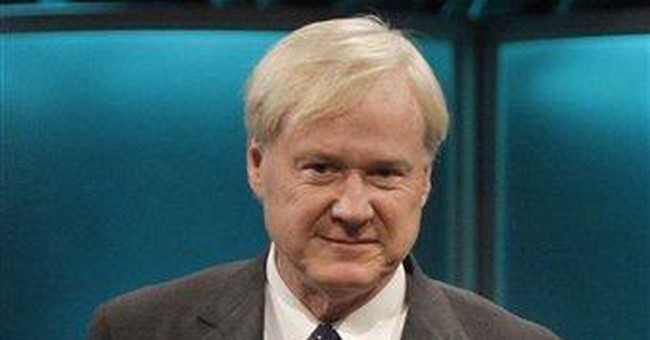 The nation's economy is causing great anxiety, and no corner seems untouched by the blight of layoffs, or the fear of further stock-market erosion. It probably should come as no surprise that in this crisis, the journalists who have hailed Barack Obama for two years as the Messiah would want their savior's arrival to be accelerated. They've broken out in cold sweats, displaying a bad case of Inauguration Impatience Syndrome.

You can't reason with them and suggest that several months of transition are necessary to build a new administration, and for Obama it's not different. They certainly aren't showing the slightest sign of remembering 2000, when the Left, with the news media cheering them on, dragged the election results out 35 days trying to install Al Gore. Obama's inauguration needs to happen immediately, if not sooner, and George W. Bush should be tossed out like spoiling Thanksgiving leftovers.

In November, Chris Matthews demanded an incredible shrinking transition on Jay Leno's show: "We will not put up with mediocrity, and we've had it for too long." America just can't wait a few weeks longer: "I'm worried about this country falling between the cracks because we've got one president who's sort of already retired and we got another president who's politely tiptoeing around the job." USA Today founder Al Neuharth wrote a column in that newspaper urging only a month between Election Day and Inauguration Day.

Another unsurprising asylum for Obama term-jumpers is The New York Times, where several staff columnists were lining up to give Bush the bum's rush last month. Gail Collins, who until recently was editorial-page editor of the Times, proposed that Bush and Cheney should quit right away, leaving the executive branch in the loving hands of Speaker Nancy Pelosi to begin enacting Obama's agenda. "Putting Barack Obama in charge immediately isn't impossible. Dick Cheney, obviously, would have to quit as well as Bush," Collins wrote. "In fact, just to be on the safe side, the vice president ought to turn in his resignation first. (We're desperate, but not crazy.)"

No one takes himself more seriously than Times columnist Thomas Friedman, and if he were dictator for a day, we'd swear in presidents on Thanksgiving -- perhaps at the Macy's parade. "If I had my druthers right now, we would convene a special session of Congress, amend the Constitution and move up the inauguration from Jan. 20 to Thanksgiving Day." The country needs Obama to replace Bush so badly, according to Friedman, that he compared it to the urgent need to swear in Lyndon Johnson after John F. Kennedy was assassinated.

Now you might understand why President Bush might skip reading the Times at sunup -- as many others have decided to, which explains the New York Times Company's $1.1 billion in total debt.

More recently, Dan Rather declared that Bush must go, which is hilarious considering he certainly didn't see how he needed to leave CBS after he demolished his own credibility in the Rathergate phony-document mess. Joe Scarborough warmly invited the disgraced anchorman to his MSNBC set to opine, and Rather quickly brought out his all-you-can-eat breakfast plate of hyperbole: "We're in possibly the biggest crisis we've been in since Dec. 7, 1941, and maybe since the time of the Civil War. So, we can't afford to have this interregnum."

Even if our problems are dire, why are media liberals so almost religiously assured that Obama will crumble the crisis within hours of being sworn in?

On PBS, the cry came on the show "Washington Week," where moderator Gwen Ifill took time away from writing her Obama-boosting book to moderate a discussion on how Obama should be granted extra time in office. She insisted "some people" felt that since Obama had higher approval ratings than Bush on responding to the Mumbai terror attacks, the transition should be shortened. New York Times reporter Peter Baker said that was exactly right: "People voted for change, and this strange, odd 77-day waiting period that we impose, in effect, between our election and our inauguration -- which is necessary to build a new government and get ready -- but it's such a long period in a hyperactive 24/7 fast-moving culture that we have today."

Isn't this funny? The transition's never been "odd" before. We do have a hyperactive, fast-moving media culture today, but the media ought to ponder whether their hyperactivity is helping to increase panic rather than curtailing it. In 2000, they wanted the election dragged out. In 2008, they want the Inauguration rushed. Would we be surprised if they all demanded that Obama's too important to be rushed out of office when his departure time comes, and can't the whole swearing-in thing be delayed until March?