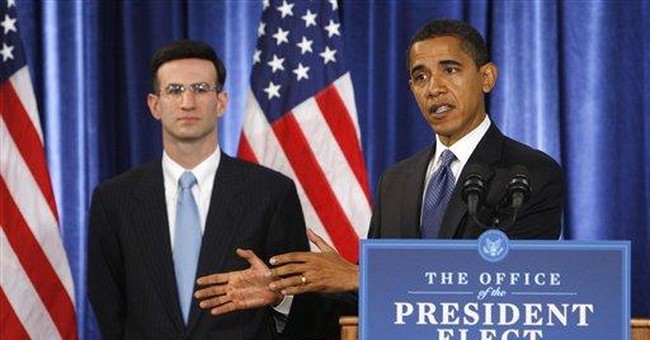 If there is a dreadfully overused word in the giddy countdown to the Obama inauguration, it is "smart." Not just "smart," but also its stronger cousins like "brilliant" and "genius." These words have been offered shamelessly for nearly every person assigned a role by President-Elect Obama. They are assembling an "all-star cabinet." This was not an honor for those having attended all the right schools, but a tribute to people who have all the "right" ideas. Liberals are smart because they're liberals. Conservative beliefs are honed from having been dropped on your head as an infant.

Last week, Newsweek almost comedically compared Obama to Lincoln, hailing the strength of his "humility." How could anyone stay humble with all these hyper-flattering cover stories about whether you're Lincoln or you're Franklin Roosevelt? Nobody asked: But what if he turns out to be another ineffective Jimmy Carter? Then again, not to worry. Just as Time turned Obama into FDR on its cover, they comically projected Carter as Gary Cooper in "High Noon" in the hostage-crisis spring of 1980.

Back in June of 2001, Newsweek headlined an article on an upcoming Bush foreign policy trip with these words: "See George. See George Learn Foreign Policy." He was painted like a president who couldn't prove he was smarter than a fifth-grader on TV. Newsweek did attempt a historical comparison. European pols heard Bush advocating missile defense, and one participant joked, "He was like Reagan ... without the charisma." Newsweek concluded school wasn't working yet for Bush: "Still a student in a most demanding and unforgiving school, he needs all the teachers he can get."

That dismissive attitude toward Republican politicians will long outlive the Bush presidency, just as it outlasted Reagan's. Nine days after the election, Newsweek editor Jon Meacham denounced Sarah Palin in the snobbiest of tones on NBC's "Today" as someone who should "be going into a kind of policy Berlitz course, which one would think would be a relatively sound thing to do." Plugging Meacham's biography of Andrew Jackson, NBC's Matt Lauer added the colorful tale that Jackson threatened to kill his own vice president, so Meacham caustically added, "I don't know if Sen. McCain has thought that along the way."

Meanwhile, Newsweek's writers are exploring the inspiring depths of humility of their blessed Barack: "Obama has unusual detachment for a politician. He observes himself as a kind of figure out of literature." Does that sound humble? Or does it sound astoundingly arrogant? Reagan living in his own movies put him in Fantasy Land, but Obama seeing himself as the Embodiment of Hope on the library shelf is somehow grounded. The Obama-crazed media are hallucinating.

On ABC's "Good Morning America," co-host Robin Roberts couldn't stop gushing about the Obama cabinet picks: "Some would say it's a team of rivals, a la President Lincoln, or is a better comparison a team of geniuses as FDR did?" George Stephanopoulos unsurprisingly agreed: "We have not seen this kind of combination of star power and brain power and political muscle this early in a cabinet in our lifetimes."

Smelling salts all around, please.

If this proposed incoming Obama administration wasn't so stuffed with Clintonites, starting with Hillary, that line might have sounded insulting to Bill Clinton. Sixteen years ago, all these same tributes were being offered to Bill Clinton's superior intelligence, Bill Clinton's grace under pressure and a superior incoming Clinton staff. Even Stephanopoulos was ogled back then over the charisma of his "power whisper."

But looking back, how well did Bill Clinton display a foreign policy genius that made the world a less violent place? Are the mass murders in Rwanda or the massacre in Srebrenica something that every Clinton fan in the media has wiped clean from their brains? Have they all forgotten the Americans killed at the Khobar Towers, or aboard the U.S.S. Cole, our lost diplomats at the embassies of Kenya and Tanzania? Did the overflowing international compassion of Clinton melt the hearts of al-Qaeda into retirement? Why, then, does every media liberal assume that History will open her arms and beckon Obama forward as an early entry into the Pantheon of Presidential Greatness?

Conservatives and Republicans have a very important role to play now in holding this alleged Team of Geniuses accountable. This disgraceful "news" media won't, period. They will line up to serve Obama only slightly less explicitly than Chris Matthews, who typically blurted out that his new job as a television host was to ensure President Obama's success. We say "blurted out" because Matthews tends to ... blurt. But give him credit for one thing: the courage to admit the attitude of servitude that his colleagues so piously deny.