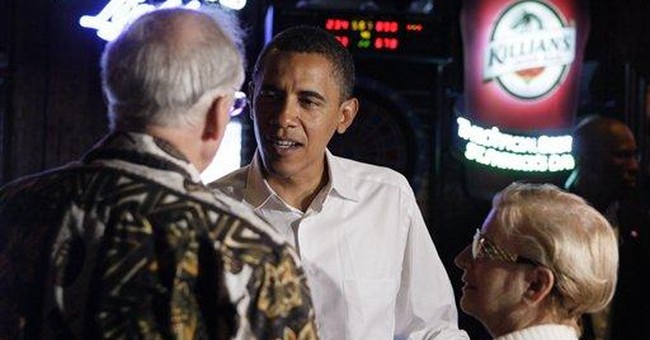 For two decades, going back to the Willie Horton ads of 1988, we've heard liberals accuse Republicans of race-baiting. Throughout this campaign, there have been endless whispers, suggestions and outright accusations that GOP could/would play the race card because Obama is half-black. Now Barack Obama has found his bizarre version of Willie Horton, and it's . Rush Limbaugh.

Obama sneakily tried to air a Spanish-language TV ad telling Latinos that Limbaugh thinks all Mexicans are stupid, Mexican immigrants should all shut up and go home, and that Limbaugh and John McCain are identical twins on immigration.

None of it is true. Now when Obama talks about reaching across the aisle and healing a divided Washington, we'll fall to the ground laughing.

How far we've come since January, when moderate McCain won in South Carolina, and the liberal media were declaring that this showed that Limbaugh and his right-wing views were politically dead. Tom Brokaw huffily declared on "Meet the Press" that McCain's win showed Americans had rejected "dogma" and were a "nomadic herd" hungering only for "solutions," something conservatives apparently can't offer.

What Obama was trying to do in this ad, obviously, was play to racial fears. "They want us to forget the insults we've put up with, the intolerance," the ad announcer proclaimed in Spanish as a picture of Rush Limbaugh appeared onscreen with quotes of him allegedly saying, "Mexicans are stupid and unqualified" and "Shut your mouth or get out." The announcer added: "They made us feel marginalized in a country we love so much."

From there, the Democrats turned to tie this phony cartoon of Limbaugh to McCain: "John McCain and his Republican friends have two faces. One that says lies just to get our vote, and another, even worse, that continues the failed policies of George Bush that put special interests ahead of working families."

The script first broke into the national media on a Washington Post blog called The Trail. It was first corrected on an ABC News blog by political reporter Jake Tapper. The mangled "Mexicans are stupid" quote came from 1993, during debate over the NAFTA trade agreement, when Rush suggested that America shouldn't worry about losing low-skill jobs: "let the unskilled jobs that take absolutely no knowledge whatsoever to do -- let stupid and unskilled Mexicans do that work."

Tapper suggested the second quote was "totally unfair," since Limbaugh was suggesting in one of his morning radio commentaries in 2006 that the "Limbaugh Laws" of immigration would include not letting immigrants offer any criticism of the government of the president. "You're a foreigner, shut your mouth, or get out." At the end, he craftily noted that this and other laws are the immigration policy of Mexico.

But here's where it gets fascinating. The Washington Post offered no "fact check" debunking Obama's lies about Limbaugh in the news section of the paper. To her credit, liberal columnist Ruth Marcus slammed it five days later, but the news section did not. ABC News somehow allowed Tapper to blog everything that was wrong about the Obama ad, but never put him on television explaining it. ABC skipped it. So did CBS. So did NBC.

It gets worse. A day after Tapper's online fact check, "Nightline" host Terry Moran put together a real hatchet job on McCain, accusing him of not only flip-flopping on the issues, but also flip-flopping on campaign decency. "The old John McCain repeatedly promised voters a different kind of campaign. Nobler, less nasty, better. ... That was then. This is now."

Moran reported that McCain mocked Obama's vote in the Illinois Senate to allow "age-appropriate" sex education for kindergarteners. McCain was wrong to say in the ad that this vote was an "accomplishment," since the bill never passed, even though Obama's vote for this crud places him against most parents and solidly on the libertine left. And his subsequent statement that he shouldn't be tagged for that bill because he only voted for it, but didn't sponsor it, is far more disingenuous.

So even as ABC's website reports that Obama is gravely misleading Latinos about the alleged Mexican-hating Rush Limbaugh, El Gringo Maximo, ABC is airing ridiculous claims from its own "experts" proclaiming Obama wants to campaign "in the clouds." Which camp is abandoning fair-play principles for political gain?