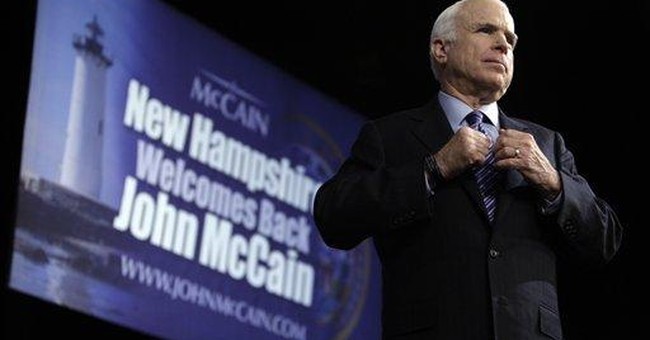 John McCain has figured out that one way to build enthusiasm among conservatives is to confront his former best friends in the liberal media. As the media glorify Barack Obama the "statesman" on his trip abroad, with the three network anchors lining up for interviews like a gaggle of smitten fan-club presidents, the McCain campaign suddenly acquired a surprising "Annoy The Media" flavor.

Like many Obama-loving press outlets, Newsweek has reported that McCain's campaign is struggling against an Obama crusade that seems "blessed by destiny." This spin is maddening. The Obama campaign has been blessed by a media that arrogantly aspires to be the manufacturers of our destiny, and make history by beating the electorate senseless with glowing Obama coverage.

McCain is learning that the best way to fight the "destiny" makers is to take them on directly. The Drudge Report revealed that after The New York Times published an op-ed by Obama on July 14 laying out his thoughts on Iraq, McCain submitted an op-ed in reply. But the Times rejected it. David Shipley, the deputy editorial page editor, suggested that McCain's article wasn't constructive enough to publish.

"It would be terrific to have an article from Senator McCain that mirrors Senator Obama's piece," Shipley wrote. "To that end, the article would have to articulate, in concrete terms, how Senator McCain defines victory in Iraq. It would also have to lay out a clear plan for achieving victory with troops levels, timetables and measures for compelling the Iraqis to cooperate."

Republicans and conservatives quickly smelled that Shipley -- a former Clinton aide and New Republic executive editor -- wanted McCain to resubmit an article that "mirrored" Obama's views. But what the Times really refused to tolerate was any criticism of their precious prince Obama. Announce your own plan for Iraq, fine, but don't try to grace our pages by saying Obama "mangled the evidence" and has "learned nothing from recent history," as McCain's rejected op-ed stated. McCain's piece would be rejected for prose disparaging Obama's position: "In 2007 he wanted to withdraw because he thought the war was lost. If we had taken his advice, it would have been."

But Shipley had no problem publishing Obama's article, which bashed McCain for bad judgment in voting for the "grave mistake" of war in Iraq, and claiming that McCain wanted permanent bases in Iraq, like our presence in South Korea. While Shipley demanded McCain recommend a timetable for withdrawal, McCain was clear in his rejected article that he thought a rigid timetable was unwise, even dangerous.

The New York Times is out of control. On a regular basis, the news department makes headlines for outrageously biased non-news, such as the incredibly scummy story in February alleging that McCain had a sexual relationship with lobbyist Vicki Iseman despite the paper's utter lack of proof. Even their advertising department has gotten into the act. Recall how they made a sweetheart deal with MoveOn.org to slam Gen. David Petraeus as "General Betray Us." Now it's the op-ed department, refusing to give McCain the opportunity to respond to Obama because they don't like the response, period.

Meanwhile, over in TV land, the network anchors lined up for their chance to boost Obama's adventures. In the first days of the trip, it led all the network newscasts, and they praised him aggressively, down to the jump shots he made playing basketball in Kuwait. Now compare that to their coverage of McCain when he went abroad. On a trip in March, the networks amassed four stories in the entire week. CBS gave McCain's trip ... 10 seconds, 31 words.

When McCain went to Colombia and Mexico a couple of weeks ago, ABC beat him up. Five times over the course of two segments on July 2, various "Good Morning America" hosts, reporters and analysts emphasized that McCain's trip might result in voters thinking he didn't care about the domestic economic situation. Robin Roberts began her interview: "So, why is Senator McCain abroad when Americans are focused on the economy here at home and losing jobs, more and more jobs?" McCain said the drug trade in Colombia is a serious issue for Americans. But Roberts just plowed ahead, and asked again why on Earth he would go to South America. ABC didn't want an answer. ABC wanted people to resent McCain for leaving the country.

McCain's campaign is now running Internet ads mocking Chris Matthews for his "thrill up the leg" comments about Obama and other assorted media goo, complete with Frankie Valli crooning "Can't Take My Eyes Off You" in the background. It's quite clear that the media are hypersensitive about any mockery of Obama. So mocking his pitter-patter valentines in the media may be the best hardball he can throw.