The Biden Standard of Media Bias 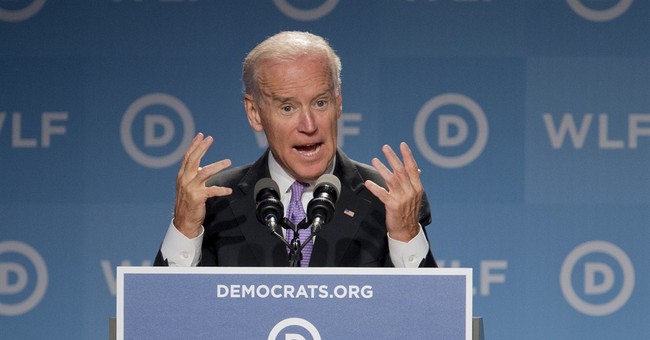 I’ll be the first to admit I get a kick out of Joe Biden.

Let’s just be frank – very few American politicians can make a swearing in ceremony for 100 senators actually entertaining. That’s a talent, to be sure, but the media’s double standard on Bidenisms is appalling and has to stop.

Biden’s trip to Iowa this week was meant to be a reminder that he’s thinking about running for president in 2016. Coming days after Hillary echoed The Terminator, South Park, and Independence Day in the Hawkeye State, it was natural that the veep trekked there himself. Massive poll deficits ain’t going to go away on their own.

Instead, though, Biden decided to remind us all why he never stood a chance in either of his past two campaigns for the White House.

He referred to bankers dealing out “bad loans” as “Shylocks,” an anti-Semitic term. He referred to Singapore’s first prime minister as “the wisest man in the Orient.” And he directly contradicted President Obama on the topic of whether or not putting troops on the ground in Iraq is on the table.

That’s a hat trick without even mentioning Biden’s musing that he was “a little worried” about his wife traveling around with Prince Harry at the Invictus Games. That one led to The Guardian to presume he was noting “Harry’s reputation as something of a cad.”

What a week. The vice president of the United States managed to use an anti-Semitic slur, invoke an outdated and offensive term, and contradict his own boss. As for the bit on Prince Harry, that same Guardian piece noted he “has a propensity to put his foot in his mouth.”

Partially funny and all face palm-inducing, it also speaks to the reality that no Republican vice-president could ever get away with a small percentage of this, much less an entire career ridden with it.

Biden has, though. Despite all of his glaring missteps and gaffes through the years, few have ever accused him of being an insensitive brute. Foot in mouth disease is about as close to that as many get. It would take less than a millisecond for the media to rip apart a Republican for using these terms, or for muddling the White House’s message on a foreign policy crisis.

This gaffe machine was at the top of the ticket in 2008 and 2012 for a party that has attacked Thom Tillis as a sexist in recent weeks for referring to Senator Kay Hagan as “Kay.” But where’s the outrage over Biden’s invoking a Shakespearian anti-Semitic term in the pursuit of fiery rhetoric against bankers?

We of course see this double standard play out most in an election year.

Charles Cooke rightly pointed out that Republican-favored election cycles are primetime for hackneyed stories of comments made by some Republican candidate in some state across the country. The offices being sought or held can range from state legislator to dog catcher and, Cooke writes, leads to “nationalization of the indignation; and, finally, the endless think pieces pondering what the incident says about the party at large.”

These stories emerge at a rate that would make some rapid response teams envious when Democrats are down in the polls, but never vice versa.

“Media that lean left will react differently to their friends than to their enemies,” reads the intro to his piece.

The Biden Standard is just the clearest manifestation of this truth and it reared its out of touch head this week, albeit in all too predictable a fashion. Rather than “think pieces pondering what the incident says about the party at large” Biden’s penance is acknowledging a “poor choice of words.”

Carry on folks. There’s no bias at work here.